Mining Towns1
Take a ride on the mining side! We all know Ouray (and all of Colorado) has a ton of mining sites, but there is...

Take a ride on the mining side! We all know Ouray (and all of Colorado) has a ton of mining sites, but there is a great mining trail with scenic views and lots of mining activity in the Red Mountain Mining area off CR 31. Located off the Million Dollar Highway before the Idarado mining site you will find a lot of mining history!

From LegendsofAmerica.com, one of the many towns of the Red Mountain Mining District, Guston, Colorado was located at the foot of Champion Gulch on the Silverton Railroad line. The mining camp began as a scattering go buildings around several mines including the Guston, Robinson, Genessee, Vanderbilt, and the famous Yankee Girl. The first one was found in August 1881 by prospector John Robinson and a few others that called it their claim Guston Mine, but they felt the ore at the surface wasn’t sufficient enough to market. Until D.C. Hartman came along and convinced then to start developing the Guston. 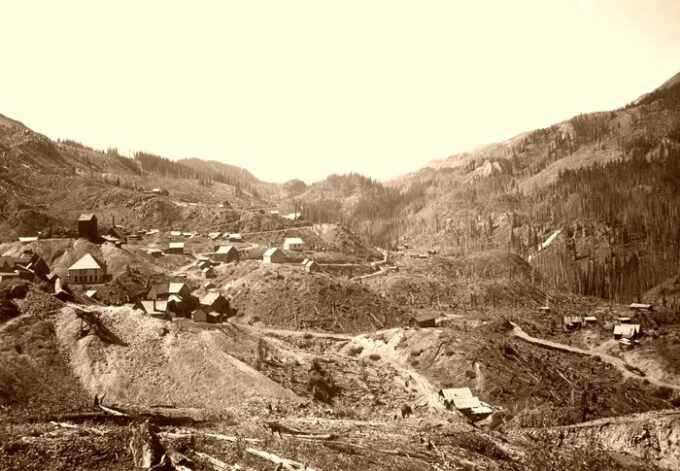 In August 1882 Robinson was hunting at the valley of the Red Mountain Pass when he found a large chunk of lead and silver ore about 300 yards from the Guston mine where he soon laid claims on Robinson, Yankee Girl and Orphan Boy mines. The mines became so profitable that the company was able to pay dividends amounting nearly $1000. In 1888 he also began to manage  the Guston mine which became profitable with a net of $400,000 while he was in charge. In 1889 the Silverton Railroad was completed from Silverton over Red Mountain Pass. The railroad made it easy to make more profit.

With this increased productivity, the Guston mining camp grew to a population of about 300 and boasted most of the amenities of a burgeoning town, including a schoolhouse.

This trail is closed  from December to March typically and during wet periods. It’s as easy and fun meandering road covering a variety of terrain from gravel to narrow two track. Suitable for all stock 4×4 SUV’s with moderate ground clearance. It’s about 9 miles long and the highest point is 12,100 ft and at that point you can see driectly across to the Black Bear Pass. It has a lot more history and amazing views. I hope you enjoy the video journey!!

FCA Is Hiring and Expanding!

Imitation Is The Sincerest Form of Flattery!