The best history lesson learned is diving into this article! I thought I knew so much, but I have had a very interesting and...

The best history lesson learned is diving into this article! I thought I knew so much, but I have had a very interesting and eye opening history lesson that has led me to a lot of amazing stories! 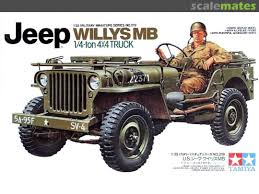 For over 75 years the Jeep has stood for freedom, adventure, and passion. Jeep Brand vehicle owners have learned that Go Anywhere, Do Anything is a way of life, not just a slogan. The Jeep badge stands  for the badge of honor. Only true Jeep owners know this pride. So begins my journey through the 1940’s and the Jeep history. Born in the heat of battle, June 1940 with WWII on the horizon, The U.S. army solicited bids from 135 automakers for a ¼ ton light reconnaissance vehicle tailored to the Army specs. Only 3 responded to the call – Bantam, Willys, and Ford. Within a year’s time the Willys-Overland made a prototype “Quad” for the Army on Veteran’s Day of 1940 The design was completed in 75 days, but only 2 were made. Willys-Overland was awarded the contract in July of 1941 calling for the production of 16,000 revised MB models at a unit price of $738.74. The Willys MB was the second model after the protoype Willys MA. Most of the MA’s were sent to the United States Allies in Russia and England under the Lend-Lease program. Today, the MA is the rarest of all pre-production Willys, with only about thirty models known to exist.

I could go on forever about this particular era and its history, I wanted to highlight some of our readers’ rigs and some of their stories. I feel some of the best stories told are the ones from now and how long these jeeps have come to be in the present. I caught up with Dan Beriswill on his unique Ford Production Willys. In complete disclosure,  I am thankful for this article idea of mine. I have learned so much and feel more in love with this Era of Jeep. 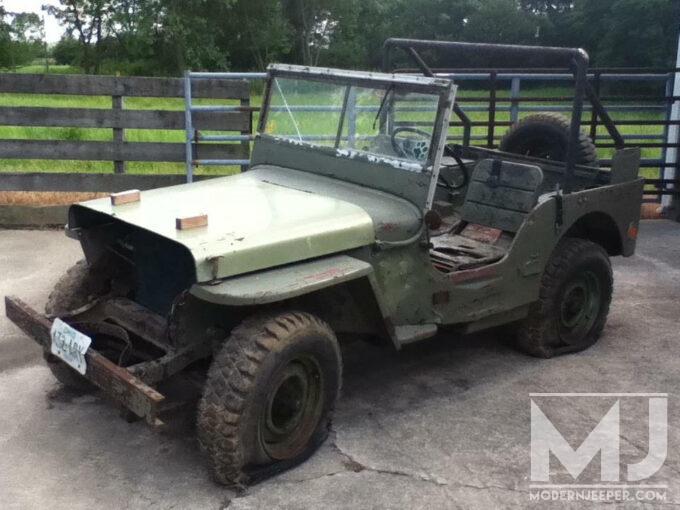 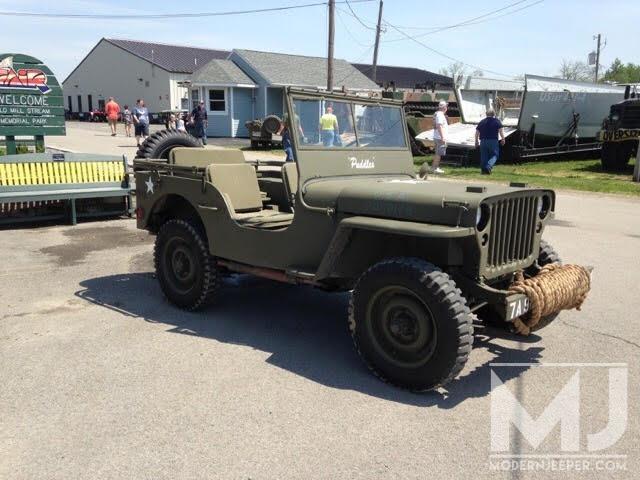 1942 Ford GPW #25180 (built in Dearborn, MI mid to late May 1942). According to Daniel: “Best I can tell based on one story I have of it, is that it came from Mansfield (Ohio), so it either was at Lahm Airfield there during the war or was assigned to an inspector there who drove from factory to factory inspecting products being manufactured for the military. My grandfather bought it for my dad when he was nine years old (around 1974 or so). Dad drove it back and forth from family farm to family farm to help out as needed. It was parked for 30 years or so in the barn out back at my grandmothers. Dad gifted me the title for Christmas in 2014, and I’m just finishing up restoring it. I’ve included a couple pictures. One of when my grandpa and dad were using it to carry lumber while they were building the barn it would eventually be sitting in where I found it as a kid. Also included is where I started, how far apart I took it, and a photo from last May (2019) at the Findlay Ohio Military Vehicle Show. I can honestly say I’ve touched every bolt and even had to redo 8 hot rivets.”

Depending on where you look for information, you’ll find that the “G” designated “Government units regardless of year” and “P” designated “80 inch W/B Reconnaissance Car. The “W” refers to the “Willys” licensed design. 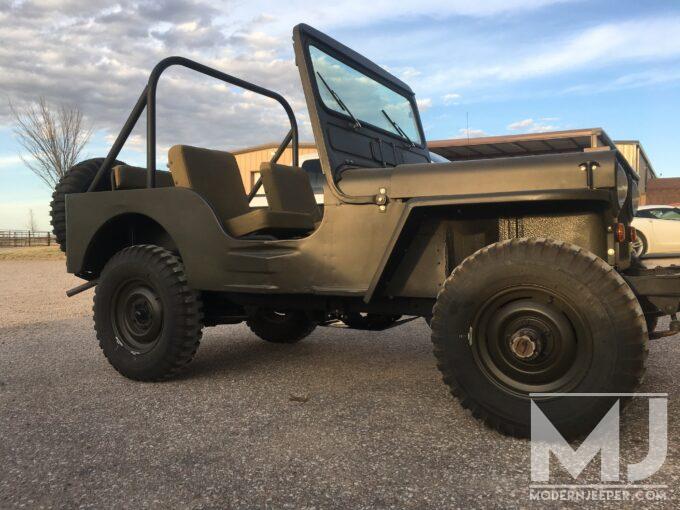 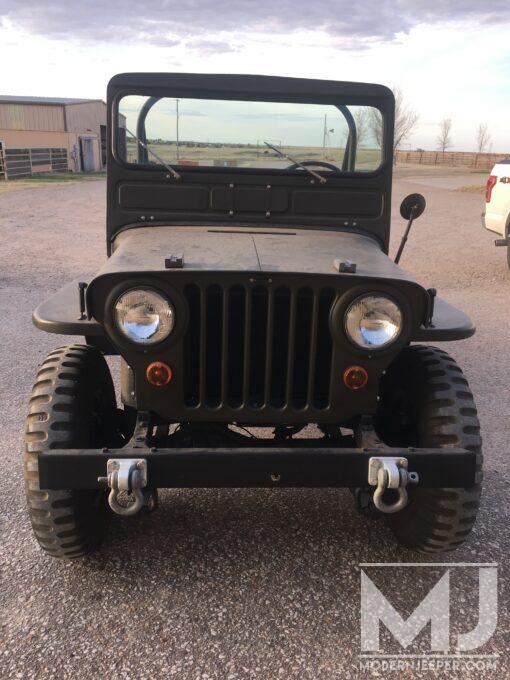 If you don’t know Brain Shirley then you should! One of the best families I know and proud to call my friends! Here is his Cj-2A and it is extra special to his kids and grandkids. Brian says he bought it off a guy last spring in his own town. The guy he purchased it from owned it since he was a kid back in the 60s or earlier. They did elk hunting trips in it etc. when he decided to restore it he had to cut a tree out from behind the bumper it had been sitting so long. He took it down to the two frame rails and went thru  EVERYTHING. It’s got all new sheet metal, gauges, wiring, seat frames, knobs, etc. Nothing was repaired, it was all replaced.  He started the resto in 1980 and finished in 1999. It only had 918 miles on the rebuild since 1999! Not sure it’s even been washed. Brian says “It’s not a 3A windshield frame and I’ve removed the rollbar, it just doesn’t need it, it’s new job is to take Grandkids to get ice cream”. Perfect! 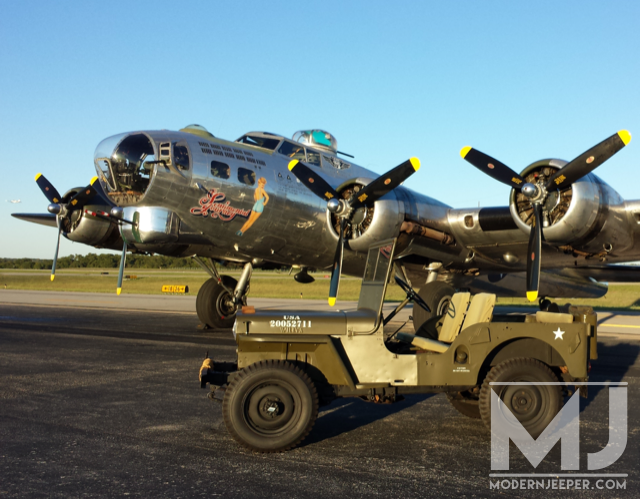 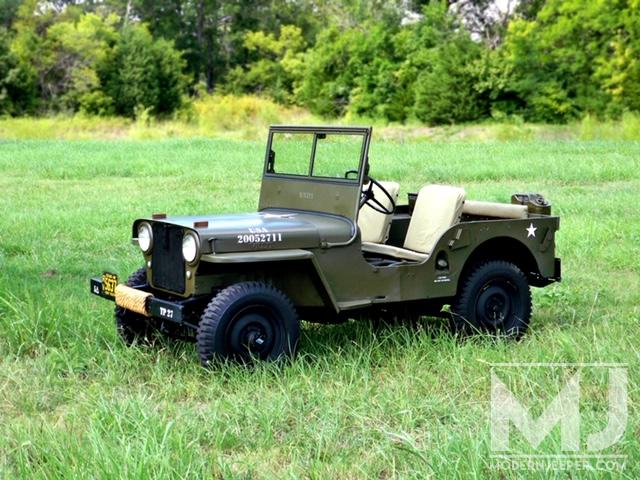 My good friend at C4X4 Jon Maib also has a cool ’48 CJ 2a. He discovered it sitting on the side of the road and he couldn’t stand seeing it sit there. Even though he wanted an older MB, he was interested enough to track down the owner who got it at an estate sale. Jon paid $1800 for it and it “sorta” ran. It was in bad shape but over the last 7 years he restored it to all his glory, now look at it!! 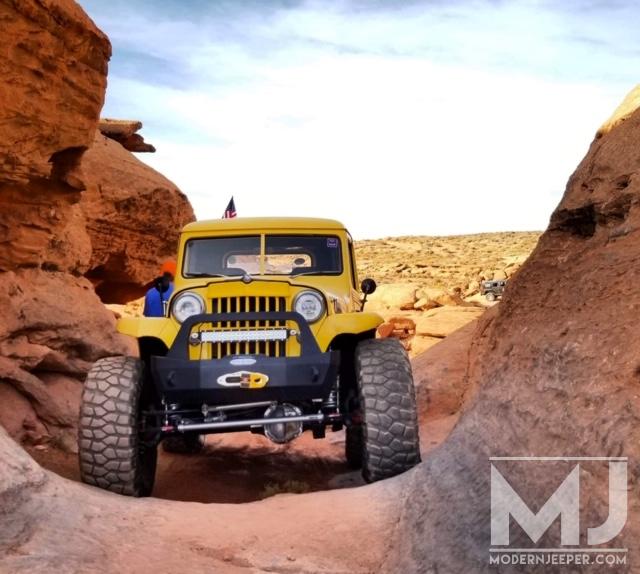 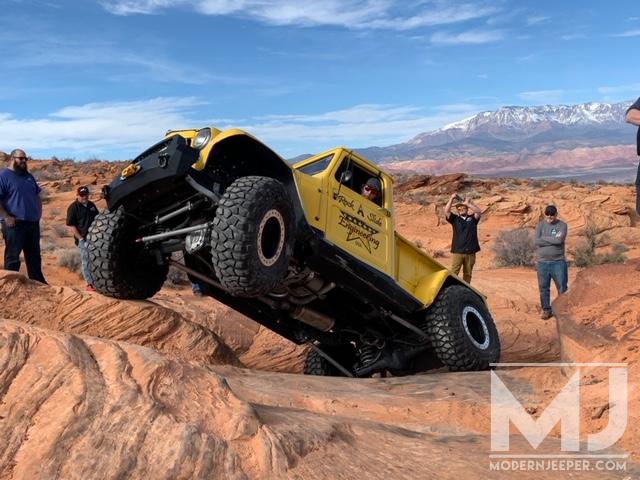 Tanner Ricks is the proud owner of one of my favorite Willys Pickup, meet Rocksanne! Tanner works for Rockslide Engineering and you have probably seen Rocksanne a lot. I love wheeling with Tanner and our crew! This is a totally different build and is one of the coolest most capable rigs out there. Tanner acquired this truck from a gentleman in Utah after stalking him and stopped to talked to him about it. Tanner offered to buy it from him, but it was a no…at first. After exchanging numbers the man called him back and Tanner was the new proud owner of Rocksanne! There was a lot of work that needed to be done to make her a crawler. The frame was rough and after hunting for a frame it was decided that a JKU frame was going under it! There was no turning back now as he cut 13 inches off that frame and centered the cab of the Willys truck on top. He built this beauty with Teraflex axles, custom built long arm suspension, king shocks, and a 6.2 LS3!! He completed this build with navigation, A/C, stereo and anything else a new rig would come with. This truck can crawl and its very impressive!

There are a few other notable 1940s class jeeps. America’s first all-steel station wagon debuted in July 1946 as the model 463 Jeep Station Wagon and featured a three-tone paintwork that simulated the “woodie” look. The no-maintenance all-steel utility vehicle was not prone to weathering, peeling or squeaks like the old style “woodies”. The Wagon’s fold-down tailgate hatch was ahead of its time and can be credited with the origin of the “tailgate party”. 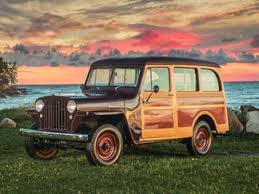 The Jeepster (VJ) was the last phaeton-style open-bodied vehicle made by a U.S. automaker, using side curtains for weather protection instead of roll-down windows. Brooks Stevens, the famous Willys-Overland designer, had intended the Jeepster to be a low-priced American sports car. Eventually it price out at around $1,900, which was at the time fabulously expensive. 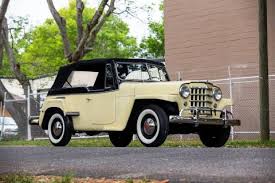 Last but not least was the CJ-3A , is considered by many to be the father of recreation vehicles. Introduced in late 1948, the CJ-3A was very similar to the previous model, but featured refinements over the CJ-2A including; a one-piece windshield with bottom vent and dual bottom-mounted wipers, a more robust transmission, transfer case, and beefier Spicer 44-2 rear axle. The CJ-3A could be easily differentiated from the CJ-2A by its one-piece windshield. 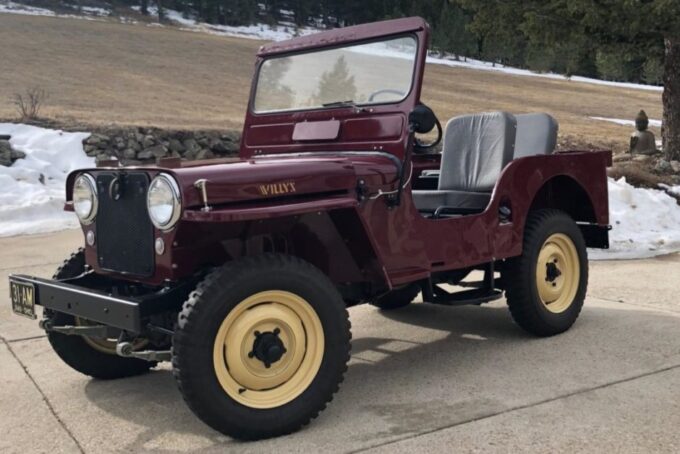 Though I still have a lot to learn about jeeps apparently, it was fun to learn something new and appreciate all the old school folks out there that have these jeeps! So show us your 1940s jeeps!!