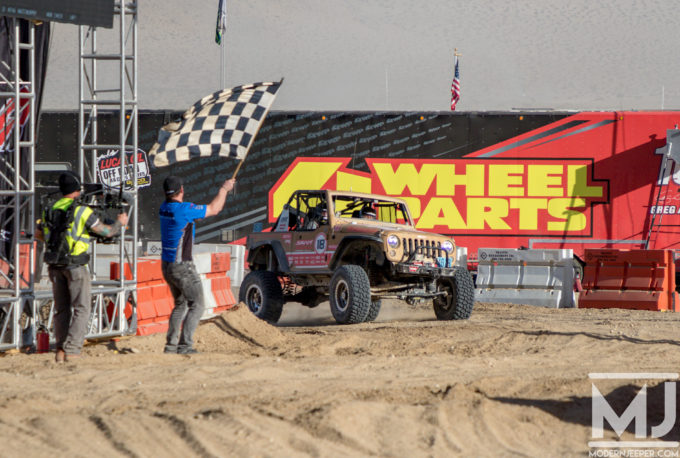 Jessi Combs getting the checkered flag for winning the Stock Class and coming in 3rd Overall.

Six hours and 136 miles after he left the startline in Hammertown, former desert racing champion Dan Fresh and co-driver Mike Kim claimed their first Nitto King of the Hammer’s title during the Every Man Challenge (EMC). Fresh was just one of 12 vehicles who completed the course during the allotted time frame, an impressive feat considering 135 cars started the race.

“The course was just brutal,” said Fresh, who competed in the 4500 class. “When they send you across these rocks you’re like, ‘there is no way we’re getting through. It’s just not possible.’ I’m an off-roader, now that I’ve done this rock crawling thing, I can say these vehicles are amazing. They made an addict out of me.”

Finishing 2nd overall and winning the 4800 class was Casey Gilbert. 2018 was Gilbert’s seventh year competing in KOH. He drove the 4400 class for two years before switching to the Every Man Challenge. “The EMC is so special because fans can relate to the guys wheeling out here a little bit better,” said Gilbert. “They can relate their cars to yours and the fan base is cool. They hoot and holler when you go by, that’s important to me, that’s why we do it. It’s what makes it fun.”

Rounding out the podium in third place and winning the stock class was Jessi Combs, one of four female drivers in the comp. Combs is no stranger to KOH and has two previous class wins in other classes.  “Racing in the stock class is a totally different animal. You’re really taking it back to the roots,” said Combs. “It’s a driver’s class, you have to be able to make your car go through and not break, that’s the hardest part.”

Defending champion Brad Lovell was looking to make it three wins in a row but suffered through mechanical problems. “We broke the front link leaving the main pit area,” said Lovell, “We had to remove it and run to the pit to weld it, and grab a new driveshaft. We put a hole in the oil pan that we patched with a zip tie and some JB weld. It cost us about an hour and a half.” Despite his setbacks, Brad Lovell still finished the race 4th place in 4800, and 7th place overall.

To see a few of the best photos we captured: King of the Hammers 2018 EMC