U.S. Navy1 Veteran1 Week of Heroes1
Our Week of Heroes continues celebrating our ModernJeeper Vets and all those whohave served our great country.  It takes all of us doing our...

Our Week of Heroes continues celebrating our ModernJeeper Vets and all those whohave served our great country.  It takes all of us doing our part to save the freedoms we enjoy in America.  Today we tip our hats to Navy Veterans Todd Ockert and Eric Chennault and the work of Wheelers for the Wounded of California/Nevada.

Todd is a US Navy Veteran currently hailing from Odessa Texas where he is a real Oil Man. Even during his 26 years serving Uncle Sam, Todd was always a ModernJeeper. This is his story. 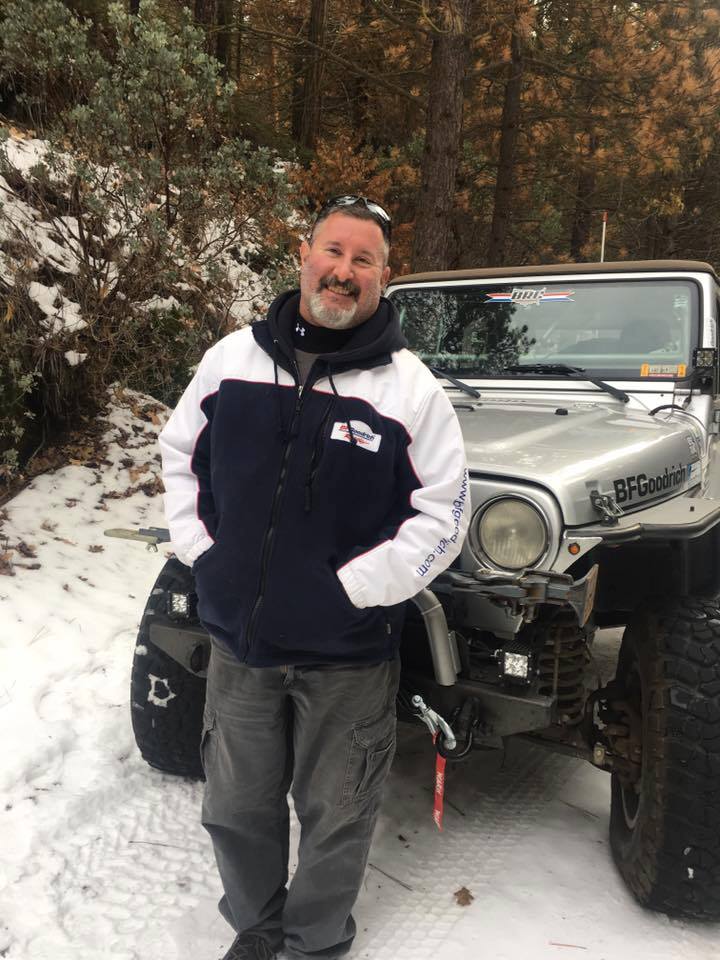 I have been off-roading 54 years, as my dad would take us on the back-roads of Michigan, or as they called it there, “Back Roading or Two-Tracking.”  That was my first taste of dirt and getting off pavement as a kid, and I have kept the adventure alive ever since.

I joined the Navy in 1984, and since then I have continued the tradition of taking my family camping and off-roading.  I spent a number of years at a military base north of Seattle, Washington and used to go off-roading in the mountains northeast of Seattle.

I moved to California in 2000 when the Navy relocated me, and jumped into family camping and just enjoying the outdoors as much as possible.  I retired from the Navy in 2010 and immediately went to work for Chevron in the Coalinga, California oil fields as a Fieldman.

My current position is “Incident, Investigations, and Reporting Coordinator” in the HES department for Chevrons Mid-Continent Business Unit.

I started out in San Diego for boot camp in April of 1984.  Went to the Navy’s technical training center in Memphis Tennessee for about a year.  Back to San Diego for more in-depth training and then up to Whidbey Island, Washington for my first real duty station.  I spent about 12 years here with a short stop in Alameda, California for a year.

During my Navy time I was given the ability to travel and see the world and a little off-roading in foreign places like Perth in Australia and Abu Dhabi in the United Arab Emirates.  What a great experience to see far away places that I may never get back to again.  Places like Singapore, Hong Kong, Mombasa, Perth, Hobart, Haifa, and many others.

A final move led me to Lemoore, California where I wrapped up my career after 26 years.

During that time, I deployed on 5 different air craft carriers with 6 different squadrons.

I have many memorial moments, though this one is by far the best one during my career.  I was reenlisting on Bald Mountain with Paul Rock as my reenlisting officer after we played ModernJeepers all day and the sun was setting on us.  This was my very last reenlistment, so the sun setting on us during the ceremony for my sunset tour was very fitting. 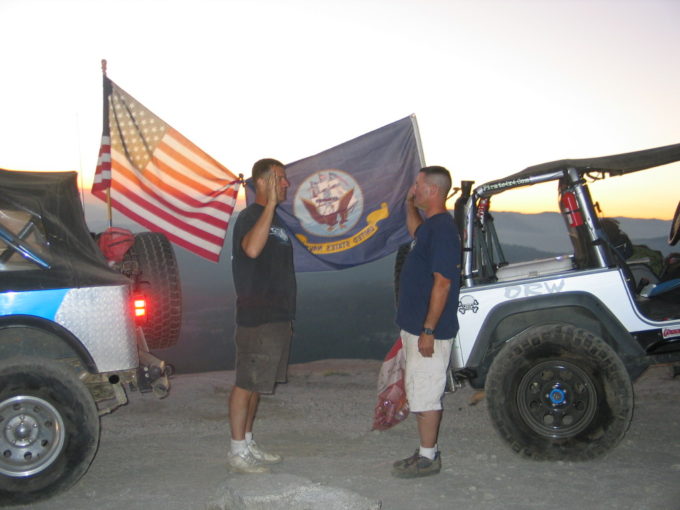 The final swearing in, the “Sunset Reenlistment”

When orders are orders!

When the Navy sent me to Lemoore, California in 2000, I had the same impression of Lemoore like many sailors who are assigned there, that “Lemoore Sucks.”  It is out in the middle of the Central Valley and you have to travel to just about everything.  Most things are 2 to 3 hours away, mountains, beaches amusement parks.  That is really the bases greatest asset, in that everything is only a few hours away.  Some of the best wheeling in the world is only a few hours away, including Rubicon, Fordyce, Swamp Lake, and Dusy-Ershim trails. 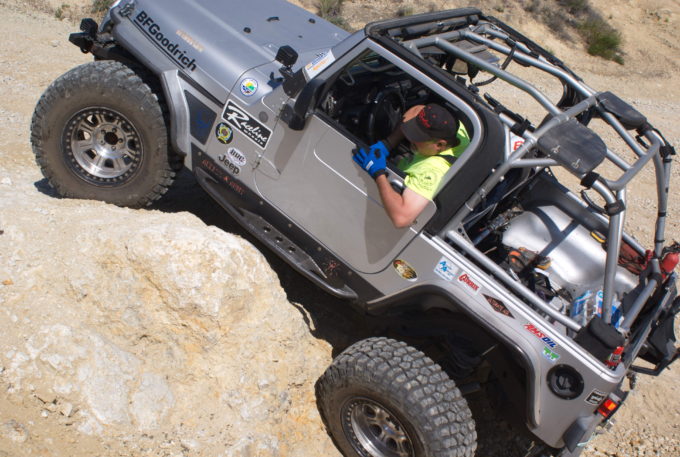 Over the years I have had the opportunity to meet lots of great people, guys like Del Albright,  Matson Breakey, both great Veterans doing great work for Land Use and Access and many other  Veteran’s across this great nation.  I could go on and on about the great people I met over the years, including a couple of Presidents. 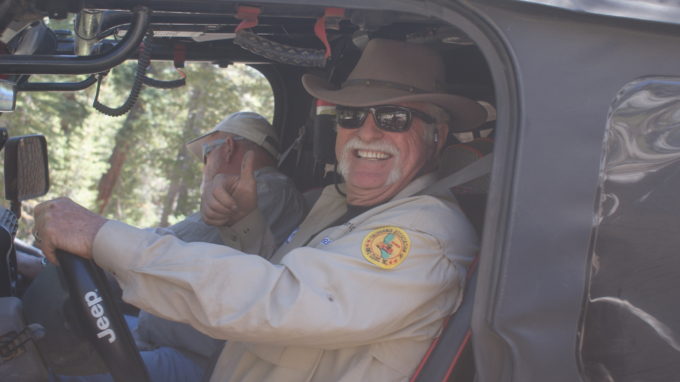 My military duty stations put me in places that allowed me to have the opportunities to meet great people and get involved in Land Use and Access.  I attended Del’s Volunteer Leadership Land Stewardship (VLLS) workshop back in 2006.  That was my starting point for land use and access and helped guide me to the opportunity to be the President of Sharetrails.Org for 4 years.

I am married to a wonderful lady by the name of Larisa who grew up in Tulare, California.  I am lucky to have her and she supports my efforts to keep trails open and the leadership aspirations in the OHV world. 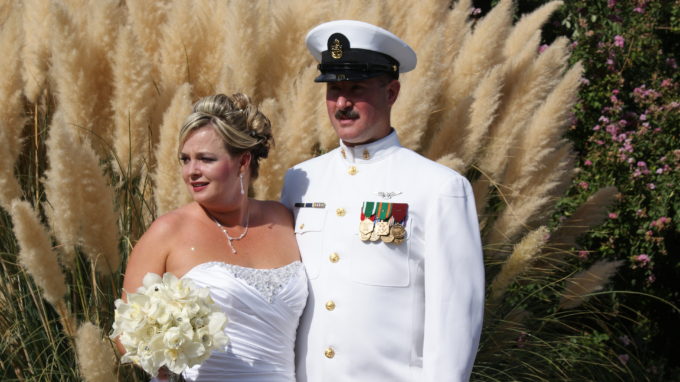 The wedding of Todd and Larisa Ockert 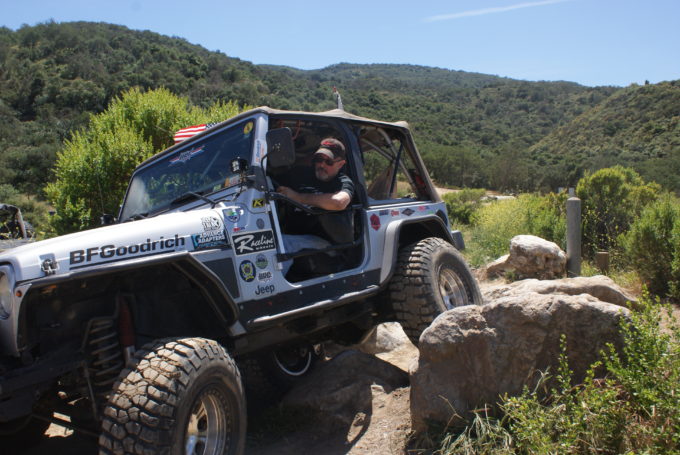 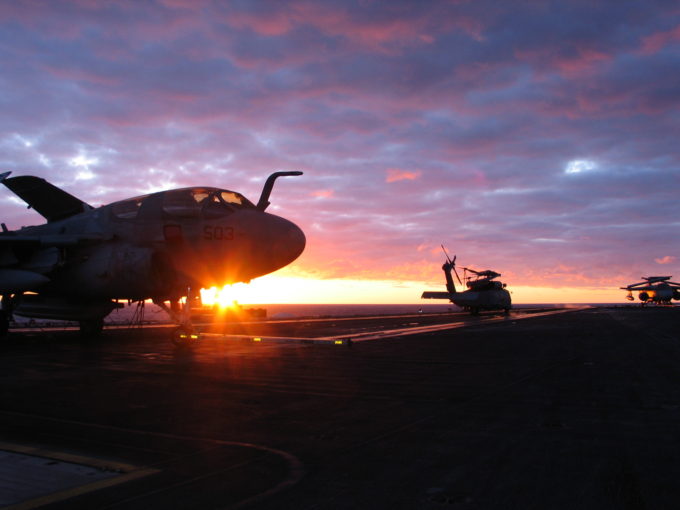 Through the eyes of a seaman 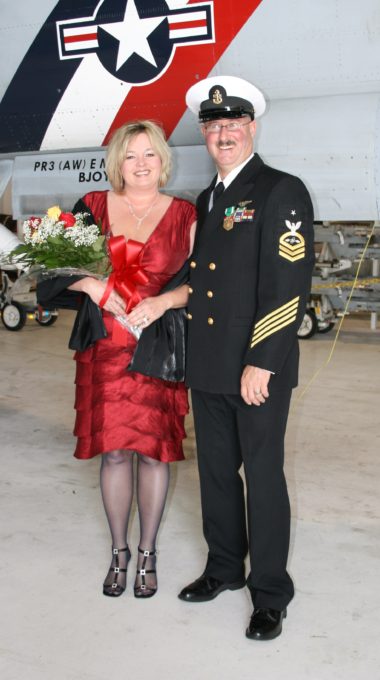 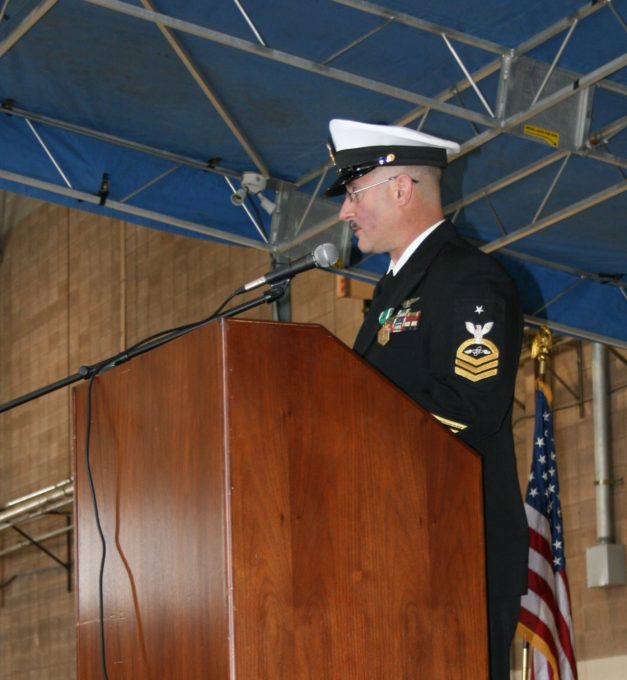 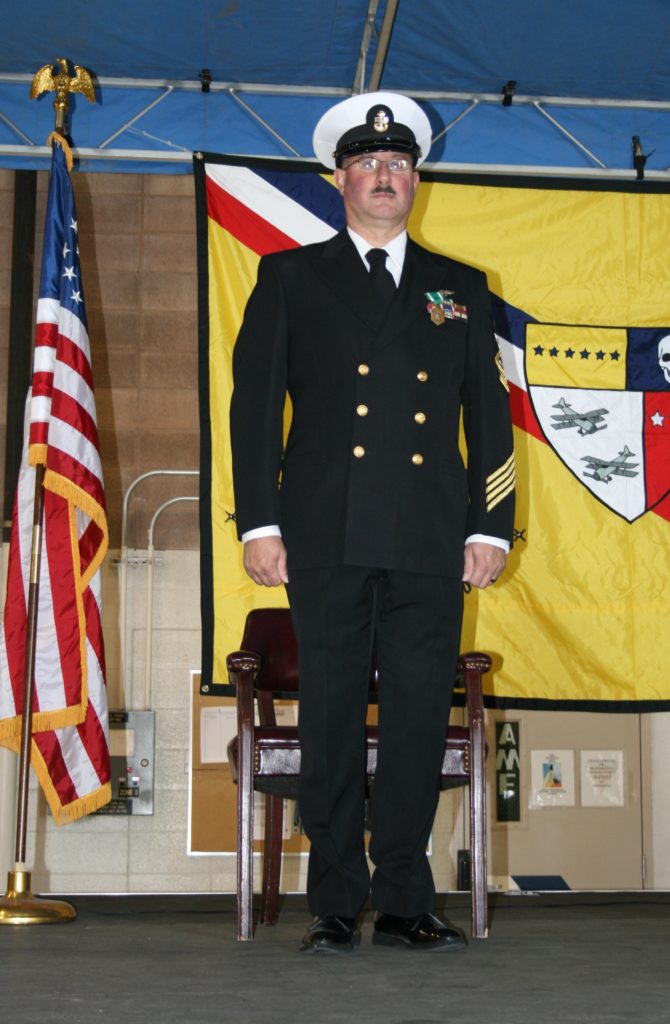 Eric is a US Navy Veteran and ModernJeeper who served aboard and decommissioned the Battleship New Jersey BB62 as a FC1 (SW) managing the powerful Tomahawk Missiles. This is his story. 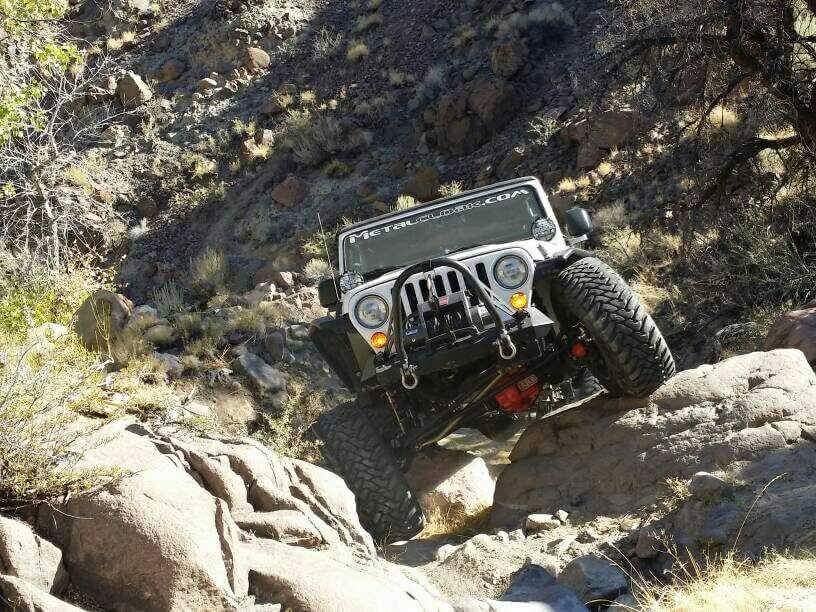 Eric on one of his many wheeling adventures

My first Jeep was a 1970 CJ5. I started driving it when I was just 7 years old in the Cascade Mountains of Washington State where I grew up. There is not a single memory of my youth or as an adult that does not have the mountains, hunting or wheeling in it.

Became involved with Metalcloak in 2011 after forming a special friendship with Matson Breakey, also a USN Veteran.

My time spent at sea aboard the Battleship was the best time of my life. I earned my Cannon Cocker Card, (see pic of me coming out of the 16” barrel) became a Shellback and earned my ESWS (Enlisted Surface Warfare) pin aboard her.

The peace that you find while alone in the woods is indescribable. To this day, my wife says she can see the stress of everyday life melt away as soon as we start hitting the tree line and a smile start to creep across my face as the smell of pine erases anything I may have been worried about.

Today I wheel my fully “Cloaked” 2006 Jeep LJ Rubicon, but will be starting this winter on a frame-off original condition restoration of a 1971 Jeep CJ5 Renegade 1 (yes there were a few Renegade 1’s that made it through onto the 1971 production line).

By the way, my great uncle is Gen. Claire Lee Chennault, founder of the Flying Tigers AVG (All Volunteer Group) WWII.

Wheelers for the Wounded

I am fortunate in the last 7 years to be a part of an organization that gives me the freedom of being in the mountains doing something I love combined with the camaraderie of hanging out with my personal hero’s — Purple Heart and Combat served Veterans. These men and women are truly amazing. That organization is Wheelers for the Wounded of California/Nevada. 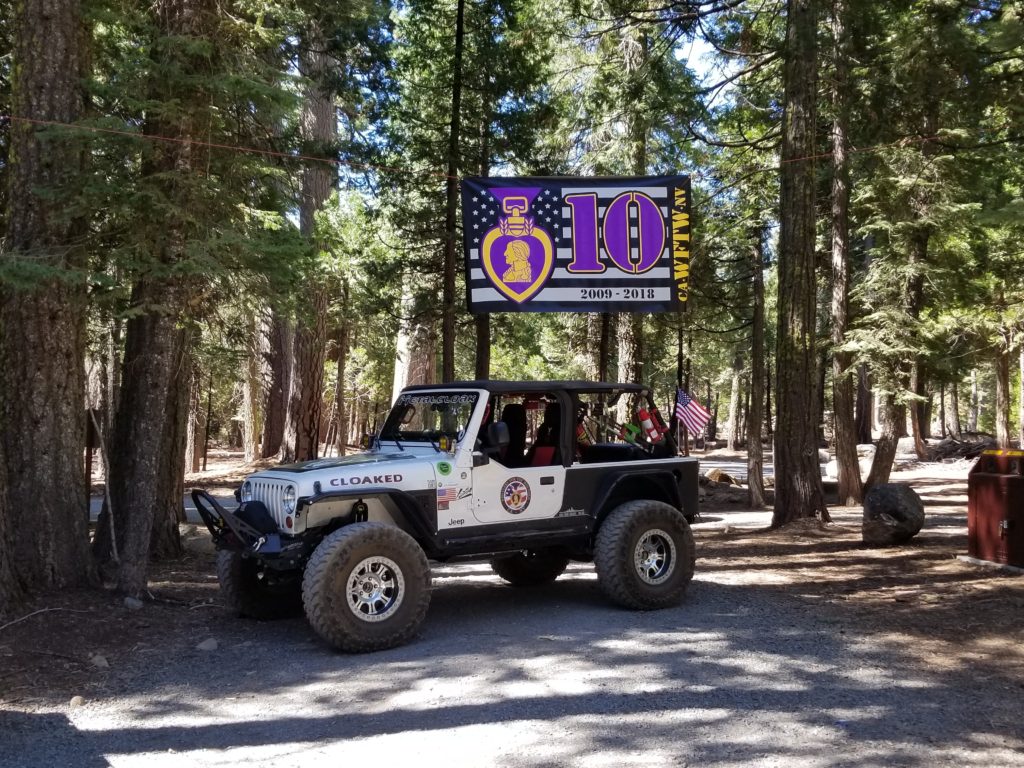 WFTWofCA/NV was founded in 2009 by Kevin Carey a US Army Airborne Air Assault Veteran. I attended their 4th annual event in 2012 and became a board member and it’s Secretary in 2013.

WFTWofCA/NV takes Purple Heart and Combat served veterans on the Rubicon trail for 3 days at no cost to them. They have served over 300 veterans in their 10 years. Their veterans range in age from 95 year old WWII vets to 21 year old current conflict vets. WFTWofCA/NV just celebrated its 10th anniversary and shows no signs of slowing down!

Earlier this week in ModernJeepers Tuesday edition, you met two of the Veterans that attend our September event, Major Del Albright US Army Vietnam and LT Scott “MF” Jackson US Army Vietnam. Fyi, the “MF” stands for Mother F%&#in! Major Albright is an advocate for Veterans and as you all know a stalwart in the off road community championing the cause of Land Use. Lt Jackson, found the healing he needed and has become the Veteran face of our organization, helping Veterans get service connected.

It is an honor and privilege for me to stand shoulder to shoulder with and help these Veterans find peace and know that they are not alone. Many of the drivers and support crew for WFTWofCA/NV are also Veterans and without them we would not exist. Thank you Kevin for giving me the opportunity to be a part of something so special in WFTWofCA/NV.

Those who are closest to me know that I am a recluse. My love for the outdoors and being a part of the off road community has enabled me to meet people from all walks of life that I no doubt would never have met. You will see a Flying Tiger and the silhouette of the Battleship New Jersey BB62 on my Jeep as a constant reminder of my roots and those who served before me. I have wheeled some of the most challenging trails in the west in Moab and St George Utah, to the Rubicon and Fordyce in California. You can find this veteran in support roles at off road events from Super Crawl Championship, to Ultra 4 races and events like Trail Hero and of course WFTWofCA/NV. You will find me at veteran’s events like Blues and Brews for Veterans supporting the cause or at events like Steaks and Stories on the Rubicon helping build awareness for trail stewardship and promoting community.

It seems that a lot of veterans gravitate to the wilderness and off road vehicles. The comradery I found while serving in the USN, is the same I find in the off road community. In my experience, there is always someone willing to lend a hand and help, whether it is for a trail cleanup, a rescue or holding a fundraiser in order to keep a trail open and promote trail stewardship.

I know that just like always being able to count on my shipmates while serving on the Battleship, I can always count on the Veterans and off road community to step up when called upon. Thank you to everyone I have met on the trail and will meet as we pass by each other on a dusty, rocky tree lined trail with a nod or handshake and mile wide smile. 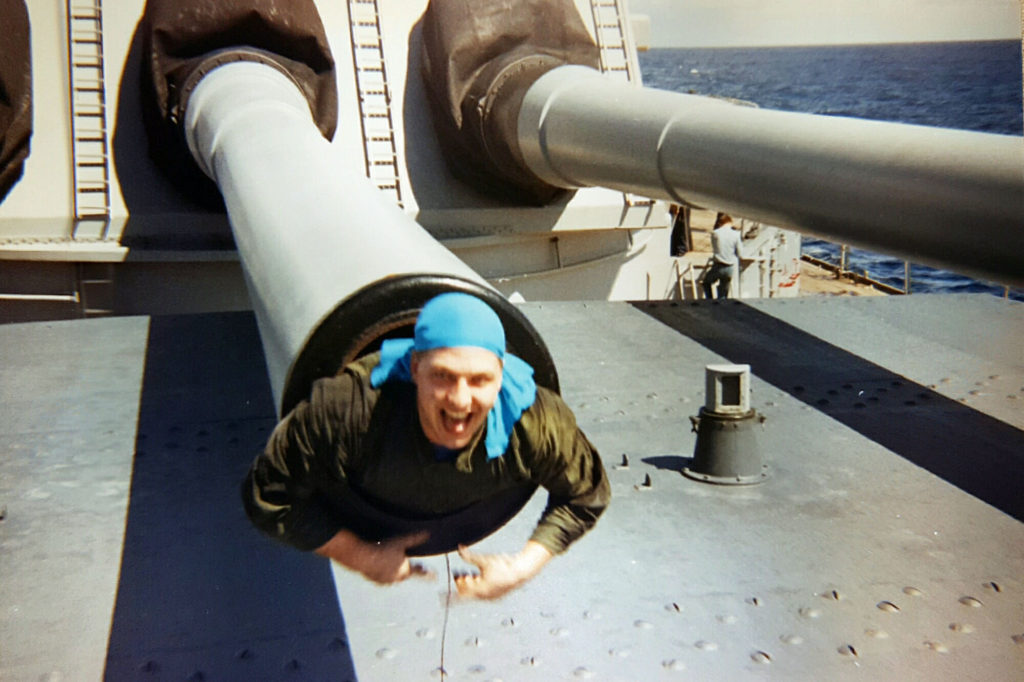 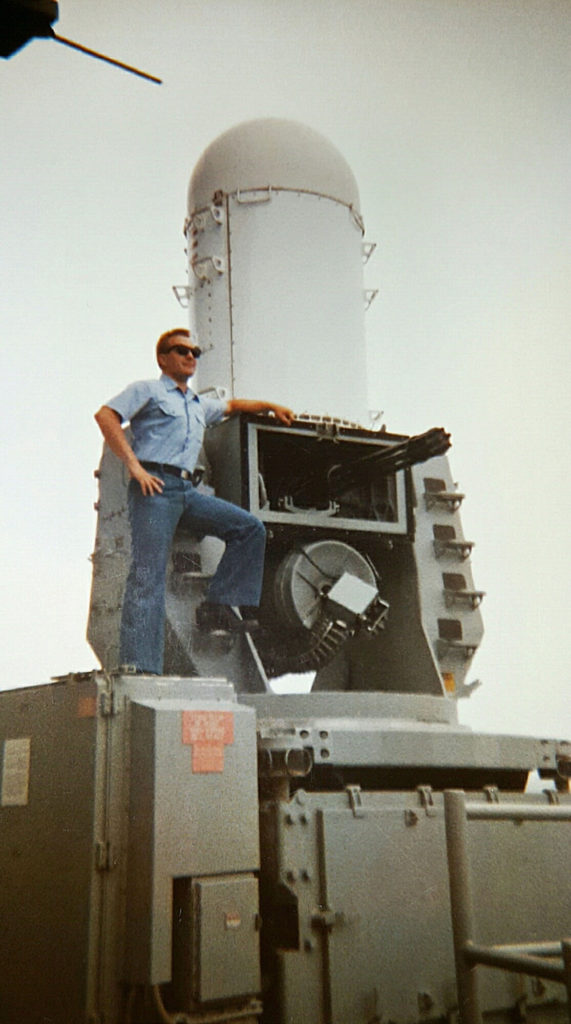 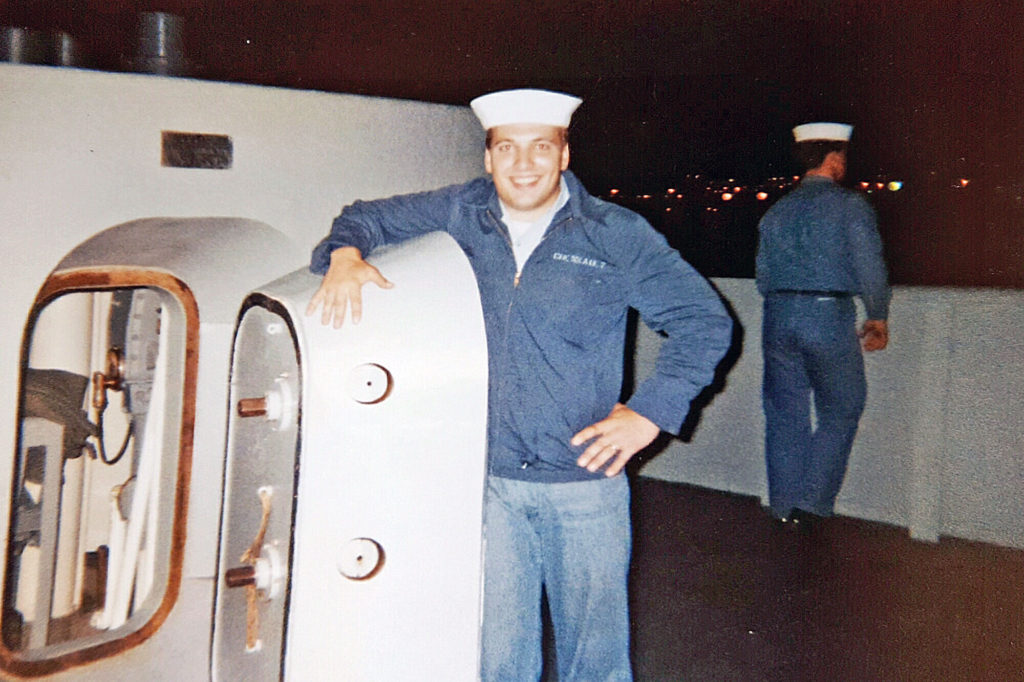 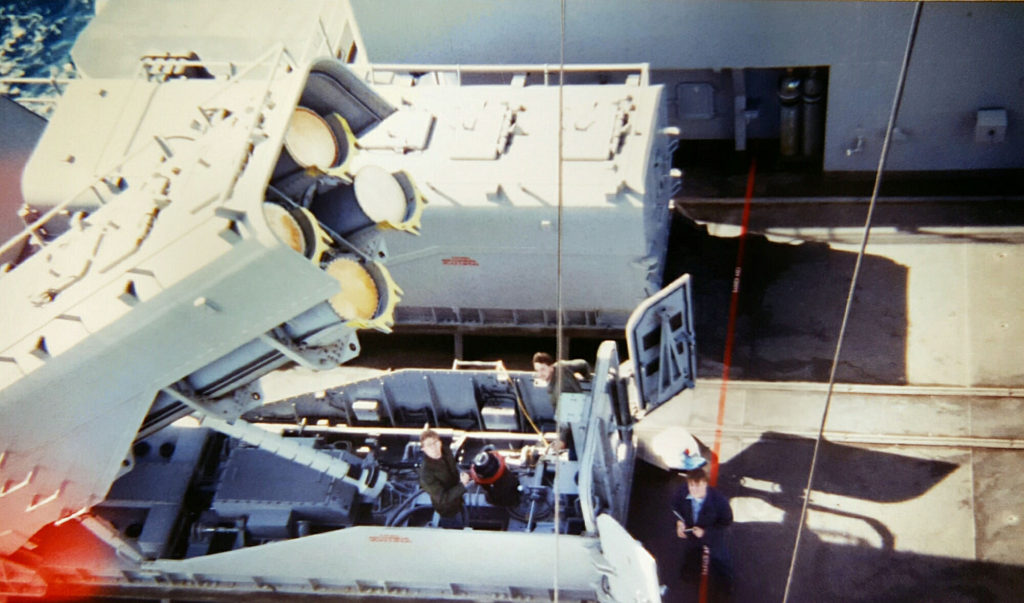 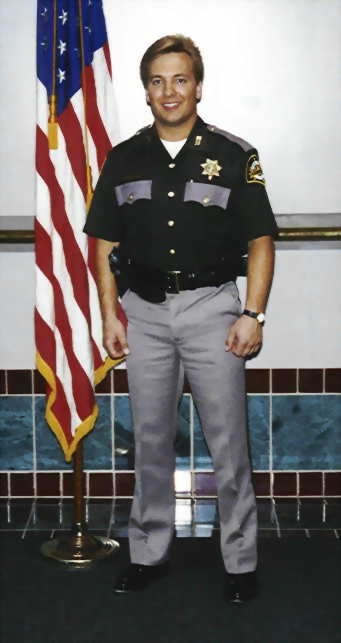 Eric was also a Deputy Sheriff and Volunteer Fireman 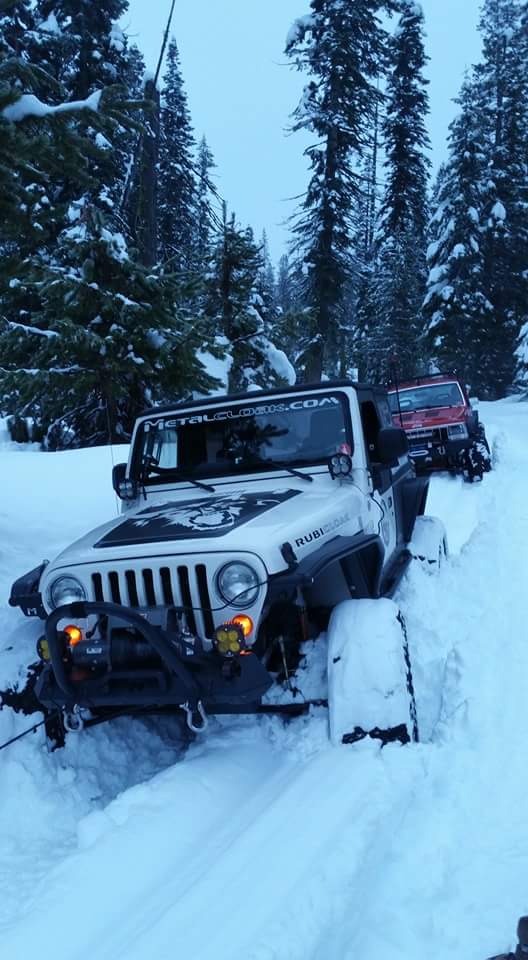 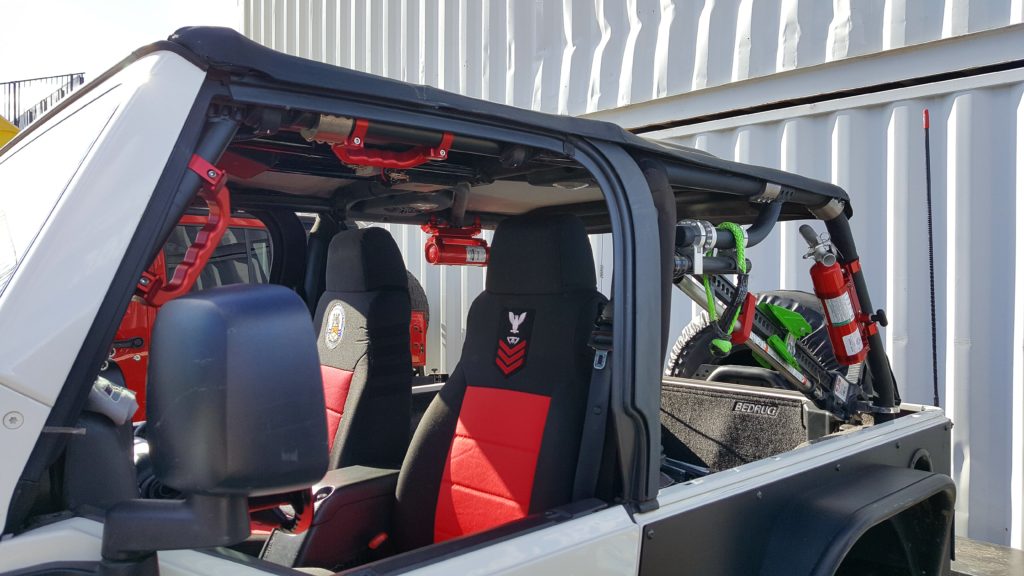 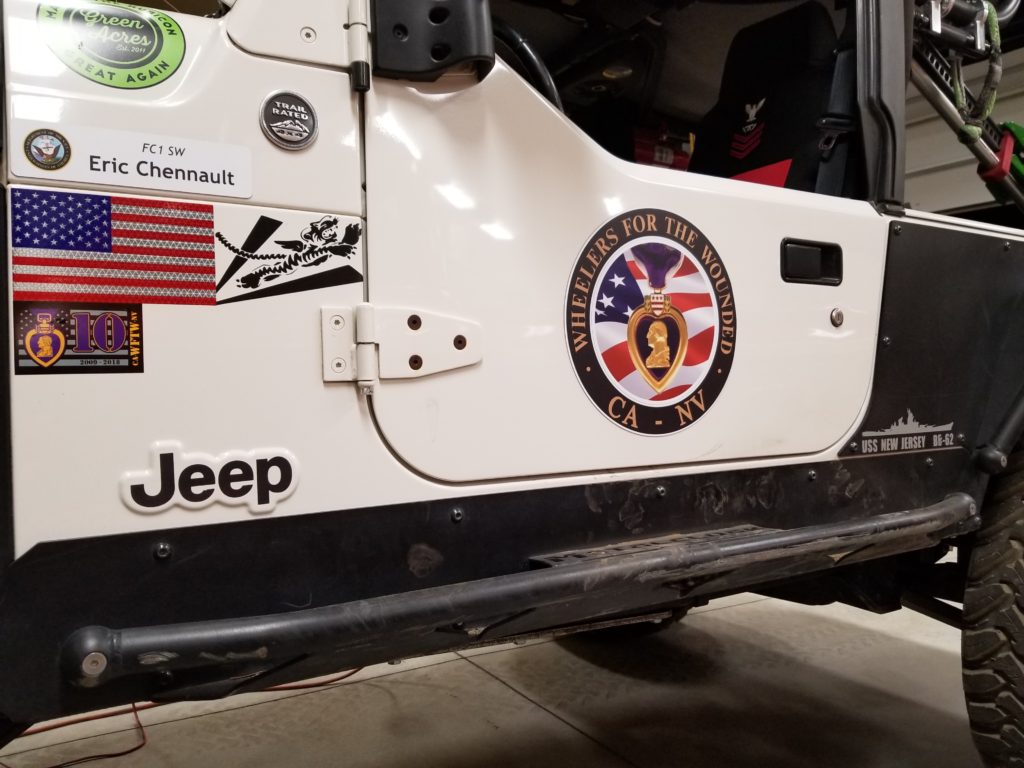 ModernJeeper salutes all the great Navy Veterans and the great work of the Wheelers for the Wounded of California/Nevada. God Bless you all!