Overlanding18
Editor’s Note: This is the third installment from our friend Dan Smarg. We have broken the story into multiple parts, and this is Part 2...

Editor’s Note: This is the third installment from our friend Dan Smarg. We have broken the story into multiple parts, and this is Part 2 of the second part. We want our readers to know that this plays into a larger “Epic Jeep Road Trip” story that we will publish as it comes available!

Bob opens the door and hops out to collect himself. He immediately winces at the rush of frigid air. This is just not his night. He’s never had to sleep in a car before much less on the side of a desolate highway. “What the hell, man?!! Why didn’t you fill up when we had the chance? Now we’re totally screwed. This is gonna kill a whole day or more. And I don’t even have a way to reach my aunt to let her know where we are or ask her for help!” “Dude, I had no idea there’d be no stations out here!” Bob just shakes his head and shivers while pacing around the Jeep.

So I take my trusty Carhartt off and hand it to him: “Here, bud, take this – I won’t really need it.” Always a good buddy no matter what, Bob hesitates. “Won’t need it? You’re from California; you’re gonna freeze your ass off!” “Hey, I’m not the idiot wearing nothing but a button-down in backwoods Wyoming – take it!” He puts it on and then I say: “C’mon over here. I got an idea.”

I walk around to the back of my Jeep and un-hitch the spare 5-gallon gas canister. “Hold this – I gotta pop the fuel cap.” I shove the thing in his arms and it takes a half second for him to register that I had this prank planned all along. “You f*cking crazy sonofabitch! You planned this thing!” I just bust out laughing and give him a hearty slap on the shoulder: “Like I said, Bobby, it’s a Jeep thing!” (Click this Jeep World link if you’re laughing right now 😛 ) 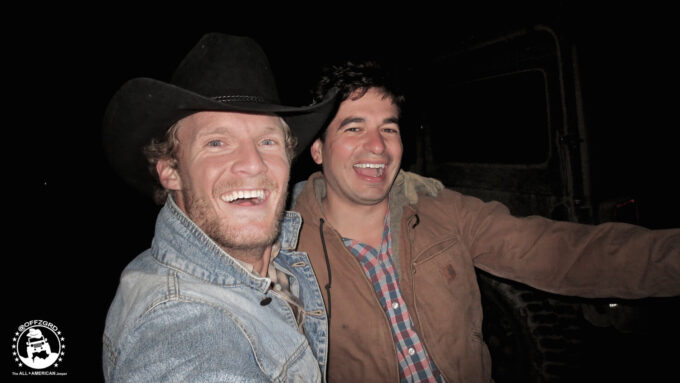 Even as you pull stunts like this, you know they’re gonna be the details in the gut-splitting stories that get told over cold beers around the campfire for the rest of your days. There’s a certain melancholy to it – you enjoy the fun in the moment, but you know it’s ephemeral. That’s definitely a Jeep thing too…

With our spirits freshly lifted, a tank full of fuel, and the wind at our backs, we drive the home-stretch to Lander. Bobby doesn’t know I have another surprise waiting for the morning, but at least for now, he gets to rest easy at The Ranch for the first time since he was five years old.

Pulling up to the place just after midnight, I can tell he’s giddy even in the dark. In the distance, I hear the rush of white-water swirling past exposed rocks now cloaked in the darkness beyond the lone, cob-web wrapped porch light. The wind picks up and catches one of the branches from a nearby tree, brushing it up against the side of the house with a thump instead of a snap. That can only mean one thing – the apples are even bigger than I’d imagined.

Inside, the house is like a heritage museum full of old Native American daguerrotypes and stuffed animal heads. 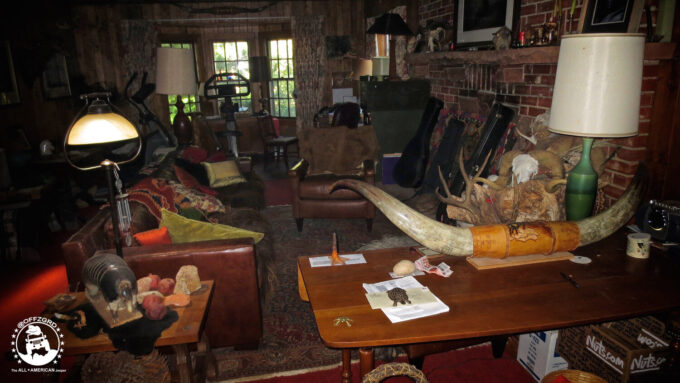 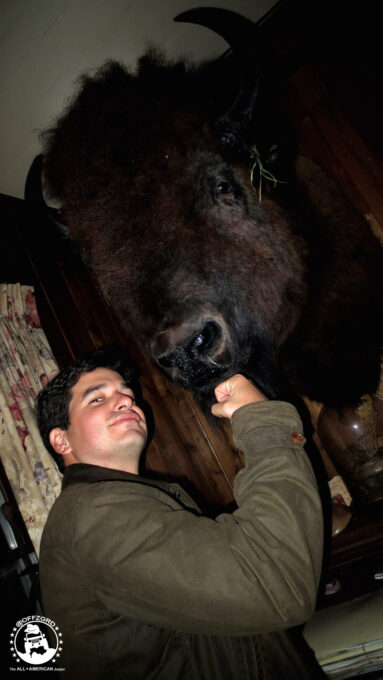 There’s something about this place that makes me feel like I am coming home. Maybe it’s because I’ve heard so many stories about it for so long that it seems familiar. Or perhaps it’s because this is the kind of place I’ve always wanted to build for myself one day that it’s almost like stepping into a dream if only for a split second.

The Welsh call this sentiment “hiraeth” – homesickness for a place you can never return to or that never was. I hope neither is the case as I fall asleep in a century-old hickory twin bed; my mind wandering through fields of green and gold into the adventures that lie ahead.

The soft morning light trickles through the windowpane and I am instantly awake. The normal heavy sense that there is always so much to do and so many things out of my control is non-existent. Nothing matters now but the crisp snow-melt water I have been longing to feel rushing around me for what seems like a lifetime. It’s one of those sensations that you think you know how it’ll feel, but you know there is no substitute for the real thing.

So I grab my trusty ORVIS fly fishing gear and head out to see if the legends about this river are as real as my imagination. 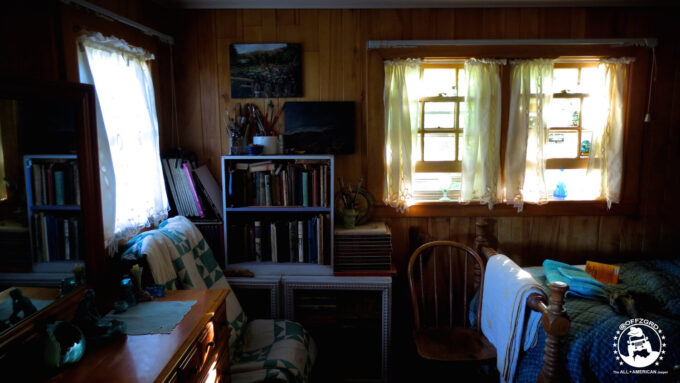 Stepping off the back porch, I’m greeted by a curious cast of characters – first a group of boisterous peacocks and then by Nell’s hospitable horses. I tell my four-legged friend I would take him with me up the river, but that kind of a thing would wear out my welcome pretty quick so he’ll have to wait until I get back to hear all the fish-tales. 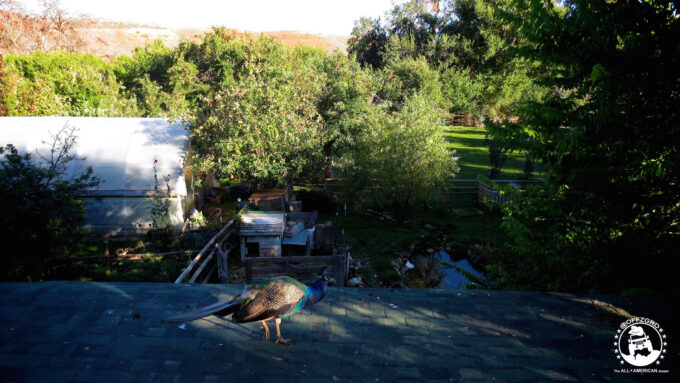 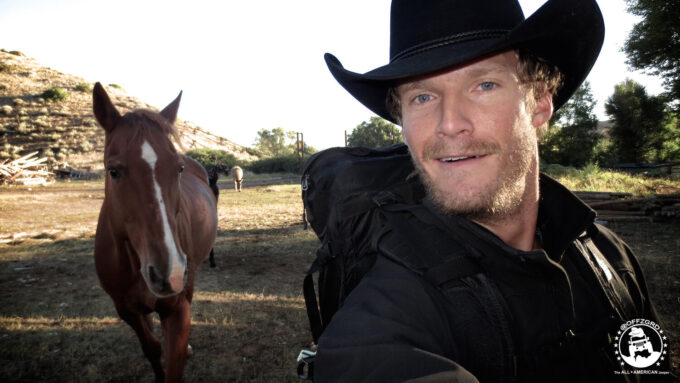 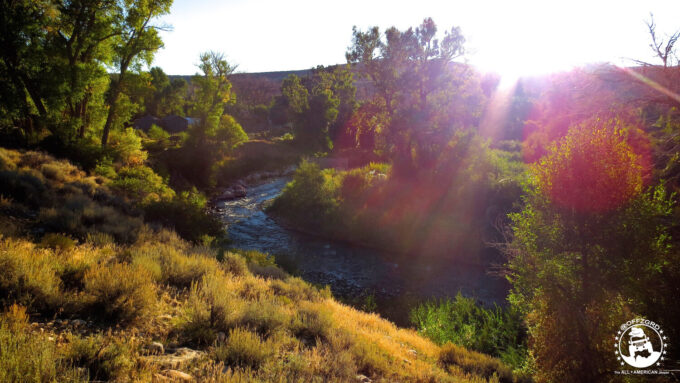 Following the sound of flowing water and hopping the old split-rail fence on the far side of the corral, I get the first glimpse of what I’ve been waiting to see for all these years…

This anonymous river, famously chock full of trout, but whose head-waters are protected by an inaccessible gorge and miles of private property, has allegedly never been leased out to hunters or anglers alike. The mere prospect of casting a line here, much less catching my breakfast, is a privilege in and of itself. 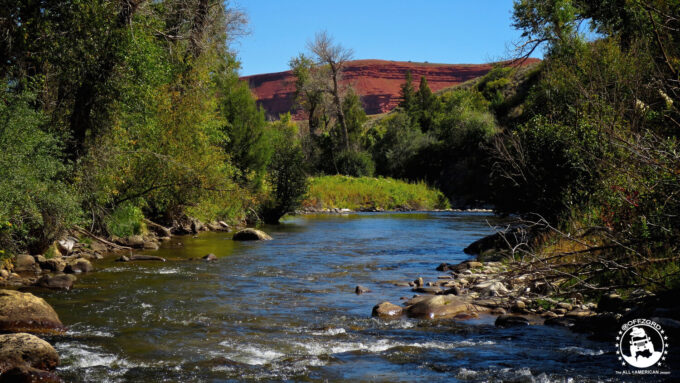 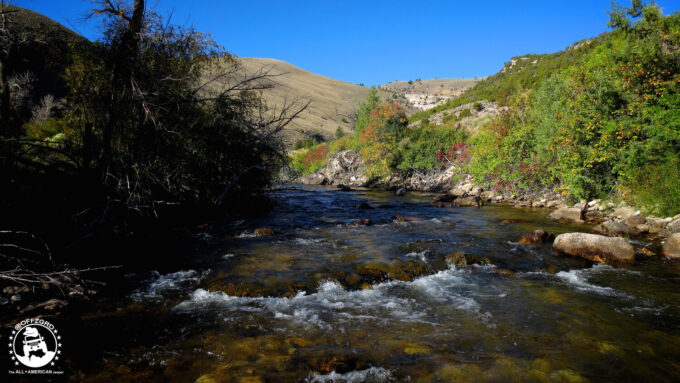 Crouching along the shadowed shoreline, I tip-toe upstream so as not to spook my free-floating query. I slowly make my way around several bends until I see exactly what I want:

A riffle stretches across the width of the river with a deeper pool located on the far side. I am extra careful not to disturb any of the loose rocks along the stream-bed. Even the slightest slip of a single stone can alert those googly-eyed mothers! Carefully turning down-stream to prepare my line without disturbing the water ahead, I slip into a time-tested mindset… 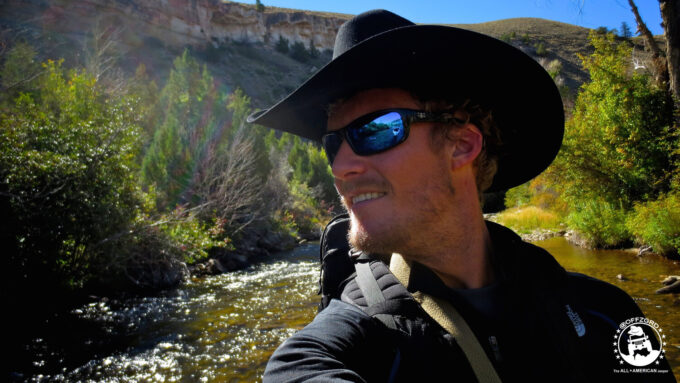 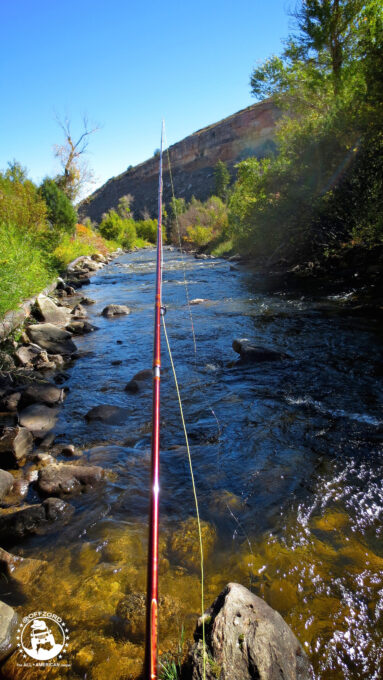 Having been an avid fly fisherman since I was a kid, I’ve learned over the years that you only get one pure cast per hole. Each river feature has its very own character and cannot simply be blindly thrust-upon. You must approach this first cast like an artist stands before a blank canvas or a sculptor surveys an uncut piece of rock. Your first stroke will either be one of shear genius or a total waste of paint; a meaningless chisel strike or mere mineral flake.

Years ago, I shot a fly fishing show in Ketchum, Idaho for Discovery Channel. Ketchum is one of those fly fishing meccas that has even drawn the likes of famous outdoorsmen, Ernest Hemingway and Teddy Roosevelt. The talent I got to work with was a private guide who introduced himself as “the greatest fly fisherman to ever loose the line.” I must admit, I thought this fella was full of shit! A real quirky personality, he could’ve been the real-life inspiration for the Big Lebowski. Guy even called himself “The Dude.” But he swore up and down he never saw the Coen Brothers’ Film. Yep – definitely full of shit.

Yet, instead of being a bumbling idiot, The Dude told me that the secret to his success was letting the river “speak to him” before every cast. Now maybe the voices he heard in his head had something to do with the fact that he’d smoke a big fat bowl of home-grown hash before hitting the water, but my opinion changed the moment we set foot in the river. I followed this self-proclaimed prodigy with a camera for the better part of a week and I swear, he never cast his line once without producing a fish on the end of it.

So in an effort to emulate The Dude’s ways, I settled for a moment and let the river speak to me. And believe it or not, if you listen close enough, the surging waters do indeed have plenty to say… 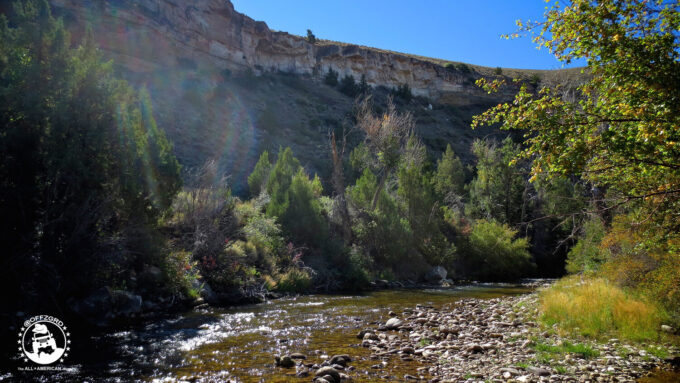 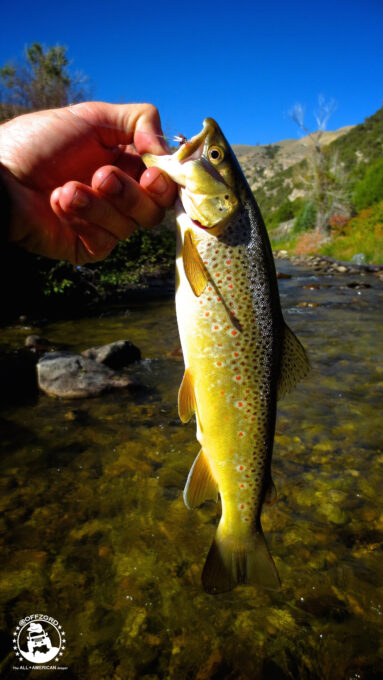 Call it a stroke of luck or perhaps it was the latter half of a lifetime spent preparing for this single moment in a place this pure, but my very first cast revealed the river’s abundance! There’s a saying that every true angler is a catch-and-release kind of guy because he knows the stories he tells are only as believable as the pictures he takes and the fish he leaves behind. Others say, sure, “I practice catch-and-release – I catch ‘em then release ‘em straight into my frying pan!”

Well, fact is, if it’s been a fair fight and neither of us are injured, I’ll return the favor of a great experience by letting my finned-friend go. But if I’m in the backcountry and have to choose between freeze-dried Mountain House or fresh-smoked fillet, you best believe I ain’t straddlin’ any existential fences!

Stay tuned for the next installment, Part 3 of Part 2, from the All American Jeeper, later this week…
You can reach Dan Smarg at: