Don’t Be Afraid! Give that Speech; Save that Trail

meetings5 public speaking1 speeches1
PUBLIC SPEAKING MADE EASY AND FEARLESS Having to give a speech in public is a scary thought to most people. In fact, recent polls...

PUBLIC SPEAKING MADE EASY AND FEARLESS

Having to give a speech in public is a scary thought to most people. In fact, recent polls by ModernJeeper and landuse advocacy groups rank public speaking as the number one fear for volunteers.

But as leaders of volunteers, access advocates, or club delegates there will be times when giving a speech to a group is part of the game.  In fact, there’s no avoiding it.

I’ll give you some ways to make this easy and mostly fearless.

Whether it’s a convention, a club meeting, a meeting of the local governing body, a driver’s meeting, or a leader is going to have to give speeches in public.

Let’s look at the proven tips that have worked for a lot of people to be successful in public speaking.

First, I suggest you accept the fact that it’s ok to be scared and nervous.  Accept it, admit it, and get over it. No one wants to take a chance on being in front of a bunch of folks and looking stupid, but we can’t let that fear hold us back from delivering our message.

Whether your community public service organization or a fishing club like this one, speeches are part of volunteer life.

Second, the best thing you can do is be prepared.  This means to practice your speech.  Stand in front of a mirror or a couple of friends and give your speech and let them help you fine-tune it.

To be prepared also means to do your homework.  Get your facts straight.  Make sure what you’re saying is what you’re supposed to be giving a speech about.  So at this point, you know you’re scared but you’re going to get past it; you know the facts and points you want to make; you’ve practiced and bingo!  You’ve got this.

Third, don’t be afraid to use note cards, either 3×5 or 5×7. Outline your speech (not word for word) on the cards and use them.  Refer to them as you’re speaking.  Be confident as you use your cards too. I like to keep my thumb (the one holding the card) on my talking point as I move through my list. 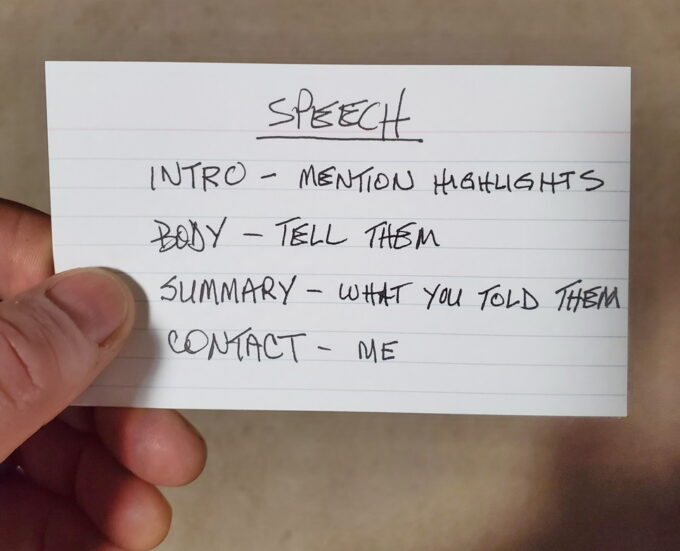 Use your thumb as a place marker as you move down your list of talking points.

Fourth, and this is probably the most important trick I can pass along to you, use this simple rule for outlining/writing your speech: Tell them what you’re going to tell them; tell them; then tell them what you told them. I cannot think of a case where this won’t work!

The first part of this rule, “tell them what you’re going to tell them,” is like your introduction.   It’s like the table of contents of a book.  It lays out what is to come so as to capture their attention and give the point of you giving a talk.

The second part, “tell them,” is the body of your speech.  This is where you deliver your message.  Make your key points.

The last part, “tell them what you told them,” is the summary.  Wrap it up and hit the key messages (short and sweet) one more time. 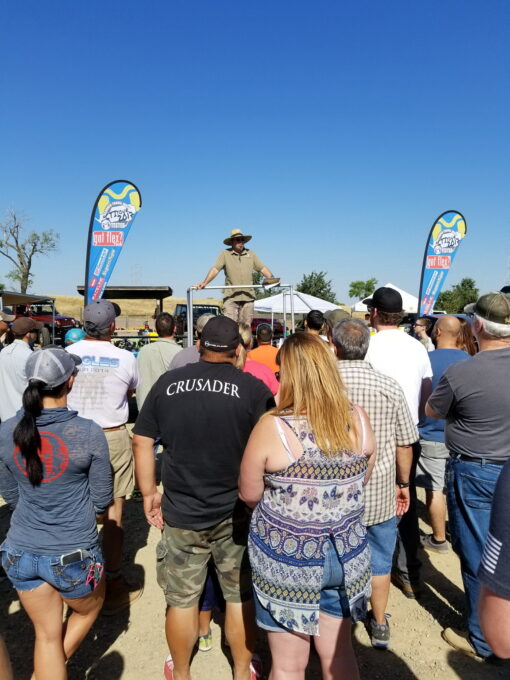 Example of a Speech…

Now let’s take an example of a speech to show you how this comes together. Assume I’m going to give a speech about how to give a speech.  I know how to do it, so I don’t need to do any homework as part of my preparation.

I also know I’ll be nervous but to get over it, I just make sure I practice my speech several times in front of a mirror before I have to give it. I also like to eat a light meal before giving a speech so my tummy has something to keep it settled down.

Now I outline my speech on my 5×7 cards.

Figure 1: Typical note cards for a speech (in outline form).

Here’s what the speech would look like written out:

“Good morning and thank you for having me here. I’m Del Albright, Modern Jeeper and I’ll be speaking today on how to give a speech.  I will give you four tips on how to successfully give a speech in public even though it may scare you worse than being audited by the IRS.

Successful public speaking boils down to 1) accepting being nervous; 2) being prepared; 3) having a good outline; and 4) using the formula.

Allow me to tell you a little about my public speaking experience.  I gave my first significant speech when I graduated from college decades ago and was chosen to be the Graduation Commencement Speaker.  Over the years, I have given over 3000 speeches in public, from groups as small as ten to crowds as large as a few thousand.  I feel I have mastered the techniques to successful public speaking and will share them with you today.

The first tip is to accept the fact you’ll most likely be nervous.  It’s only normal to be afraid of being in front of other people talking about something you’re supposed to be the expert on. Like any other fear, our best defense is to accept it and get over it.

The third tip is to have a good outline of your speech and to use note cards. (Blah, blah, etc.)

In summary, I can attest to the fact that these four tips of 1) find ways to get over and accept your nervousness; 2) being prepared; 3) having a good outline;  and 4) using the rule of “tell them what you’re going to tell them; tell them, and tell them what you’ve told them, will make your speech making duties a lot easier.”

Notice the first couple of paragraphs is the “tell them what you’re going to tell them” part with some introduction thrown in.  I’m also hoping to make a bit of a connection with the audience in the intro.   If I were speaking to a community service club, I might mention how I used to be in one and how much I admire people who volunteer their time for the good of the order.

If I were speaking to the local veterans club, I might mention that I am one, or that my Dad served during WWII, and how much I respect anyone who served their country. It helps to find connections like this during your intro.

But do not be phony!

During the “tell them what you’re going to tell them” part, try to always be sincere. Sincerity will nearly always win over an audience. Show them the real you.  If you can tell a joke, do so.  If telling jokes mostly fall flat for you, skip the joke and tell them something about you.

The next several paragraphs are my messages, key points that I want to deliver.  This is the “tell them” part. Here is where the facts come in.

Then the last paragraph is where I re-iterate my four tips for public speaking, so they go home with these thoughts in mind.  At least I hope that’s what they’ll remember.  Keep that in mind.  Your last paragraph when writing, or your last comment when speaking is what they’ll remember about you and your speech.  This is the “tell them what you told them” part.  Make it a good one.

My granddaddy told me a couple of things that I’ll never forget.  First, he always used to remind me that you never get a second chance to make a first impression. Second, he told me that when it comes to talking in public, the last thing you say is the first thing the audience will remember later.  So yes, again, hit them with a good quick summary.

So, what does this mean to a leader of volunteers?  Well, right off the bat I’m sure you’ve figured out that you need a good opening when giving a talk.  Be confident and tell them what you’re going to tell them.  Then, leave the audience with a good impression and your key messages.  Be confident.  Deliver a solid summary and thank your audience.

(Stay tuned for tips on speaking to the media/press).