Disaster! 10 Things to Do After a Desert Mine Shaft Eats a Jeep

recovery9 winching6
Special to ModernJeeper by Gordon Crowl, ModernJeeper Adventurer who traveled with us on the first annual Death Valley Adventure where he also entertained us...

Special to ModernJeeper by Gordon Crowl, ModernJeeper Adventurer who traveled with us on the first annual Death Valley Adventure where he also entertained us with his singing and playing the ukulele around our campfires.  His story here gives us a crucial reality check with our Jeeping.

Just another day wheeling in the desert with your wheeling buddy, or so we thought.

Ed is a very experienced off roader. He’s a retired heavy equipment mechanic and founder of many of the trails around Johnson Valley and Cougar Buttes. He does not take unnecessary risks and he is always prepared with his well equipped Jeep.

One week, when we were having a beautiful desert bloom, Ed and I went out the Lucerne Valley desert to explore. We had a great time exploring some mine adits.

One of the mines we saw was grated off to prevent people from falling in or entering. We kept driving on some decent desert trails enjoying the wild flowers. Ed had a warning light go off on his Jeep, a 2017 Willy’s Wrangler. Ed hooked up a monitor and it showed that he was having a misfire in the number six cylinder. He commented that he’ll have to have that looked at when we get back.

He jumped into his Jeep, but didn’t belt himself in right away, and we continued up the road. The road made a left turn and went up hill. We climbed the hill, me following Ed. We could tell a mine was near by as we were driving around some tailings.

As we neared the top of the hill, I saw Ed’s Jeep disappear. He didn’t hit his brakes but just went straight down. 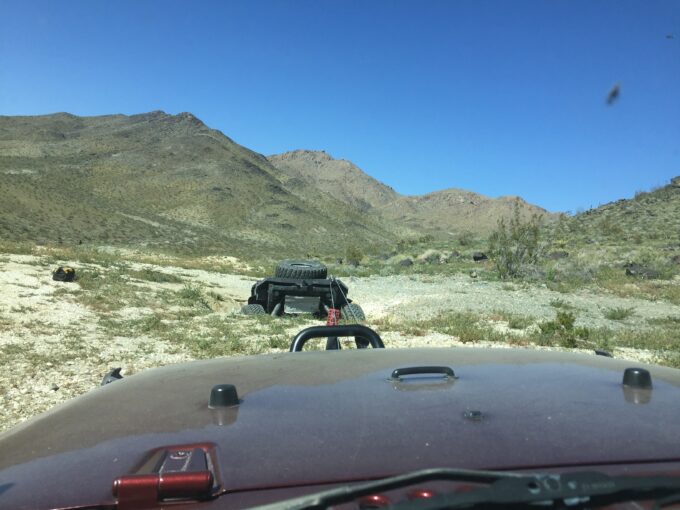 It took me a second to consider what just happened. Ed drove into a mine shaft. It was completely unmarked and unsecured. He didn’t even see it.

I shut down my rig, set the brake and ran over to Ed and asked if he was Okay. He said he was, though he said his head was bleeding. I yelled to him to stay put until i could get a winch line on his rig to prevent it from going farther down the shaft.

While I was getting my winch ready and getting shackles for Ed’s bumper, he climbed out. He said he didn’t want to stay in there any longer. I couldn’t disagree with him. 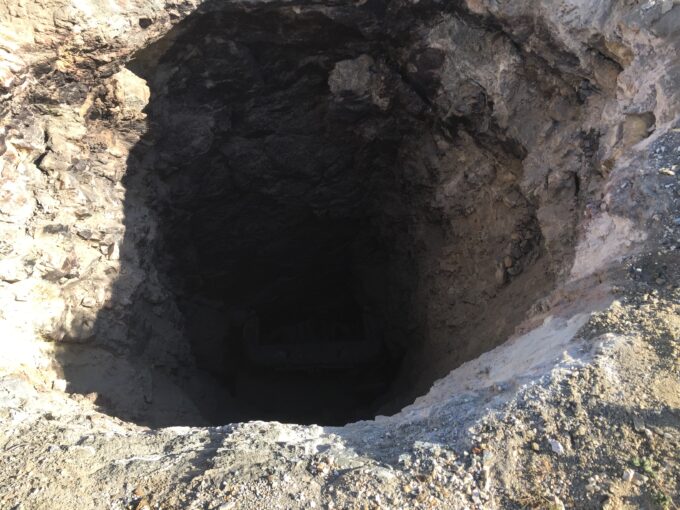 He had popped open the driver’s side back window on his 3-day old soft top. I got a winch line on his rig and put tension on it. I then got my first aid kit and tended to Ed’s small laceration on the top of his head. (He got it, due to not having his seat belt on).

After Ed was deemed okay, I checked and we had spotty cell service. I dialed 911 and spoke to the San Bernardino Sheriff’s dispatcher.

As I was talking to her she asked, “where are you located?” After a short “Um”, I remembered that I was running GAIA GPS maps and I gave her our coordinates. Within minutes a SBSD Helicopter was overhead.

He asked if we were okay and we signaled that we were. The dispatcher called back and inquired more as to what we needed. Ed’s phone had been in a cup holder and was now somewhere inside his now vertical Jeep.

We could hear rocks falling sporadically, signaling that his Jeep was slowly going farther down the shaft. All his off road contacts were in his phone and I would not let him go back into his Jeep to get it. I asked the dispatcher to please contact a towing company that could do an off road recovery. She asked if she could give my number to the tow company to call me and I said yes.

The tow company called and said they could recover Ed’s Jeep at $360 an hour, door to door, meaning the clock started when they left and stopped when they got back to their office. We agreed as we had no other option. I then gave them our coordinates and gave them a mental map, by giving the off road trail road numbers to follow.

After a couple of hours, they showed up, hooked Ed’s Jeep, pulled it straight up and then out. The tow company tow strapped Ed’s Jeep out as I led the way out.

Once out of the back country, Ed contacted his son, who would bring a trailer to trailer his Jeep home. (being vertical for a couple of hours, all the transmission fluid leaked out the transmission vent). Nine hours later we were home.

Ed ran some numbers and figured he could repair all the damage himself. That being the front fenders, front quarter panels, hood, windshield frame and window, both doors and his 3-day old soft top. 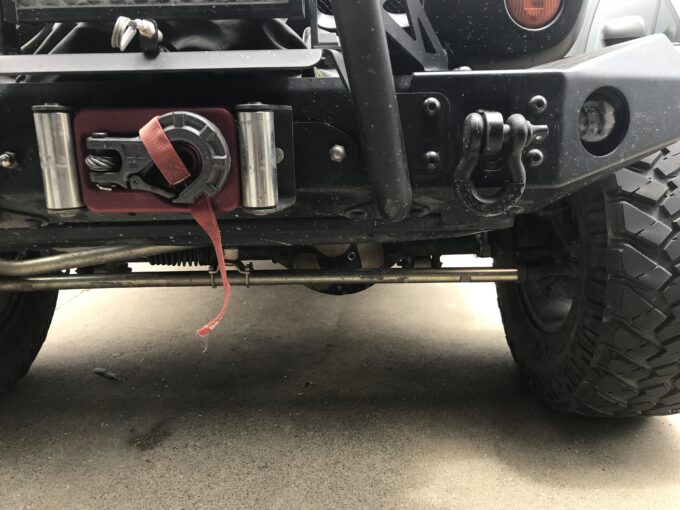 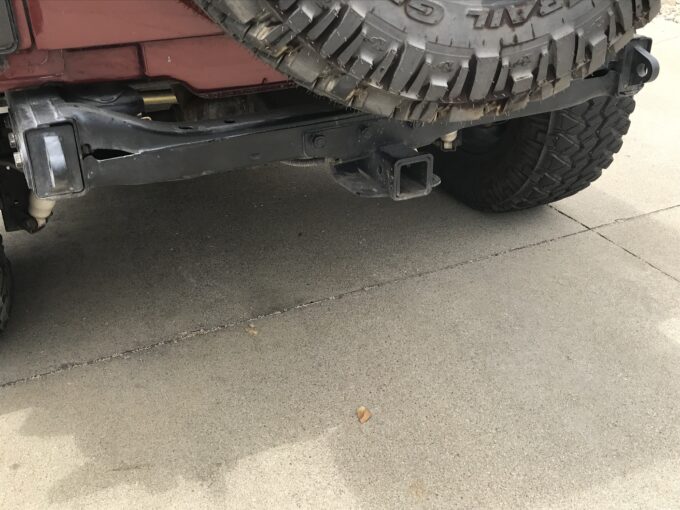 Oh, I forgot to mention that when The Jeep was lifted out of the mine shaft, there was an old truck stuck farther down the shaft. We were thankful that injuries were minimal and the Jeep could be repaired. 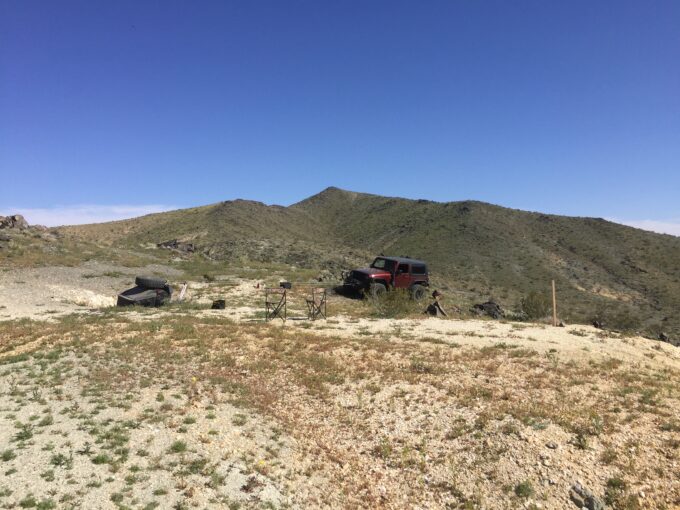 Afterward I was playing this back in my memory and then thinking how or what could we have done differently. 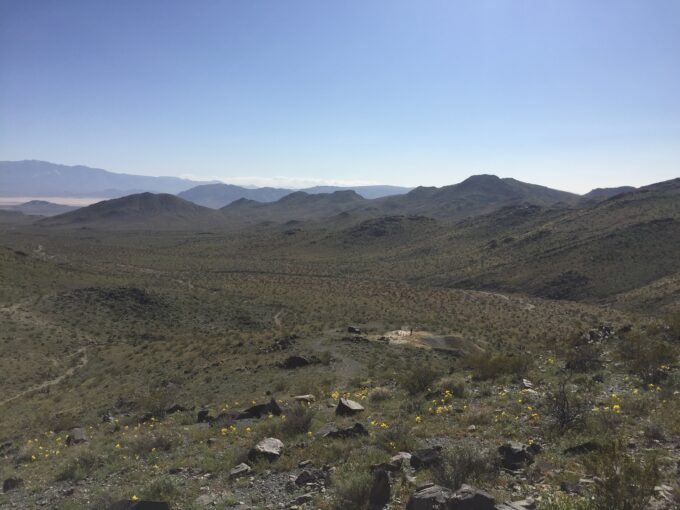 First, always wear your seat belt, even if you just jump in and move a few feet.

Second, have redundant recovery gear. Some gear I didn’t carry because I knew Ed did.  But we couldn’t get to it safely in his Jeep.

Third, have your shackles attached to your rig while wheeling. It took a few precious minutes to get stuff together, to put on the shackles and get his Jeep stabilized.

Fourth, have a sufficient sized hook on the winch cable. The hook on my winch seemed small and we had difficulty attaching it quickly. (I Have since put a Warn Epic hook on my winch line). it would have taken some extra time too if we were using something other than a hook.

Fifth, run a GPS program so you can tell where you are if help is needed. Thankfully that we did right.

Sixth, mount your phone so that it will not go flying in a roll over or vertical drop.

Seventh, have a good first aid kit. Thankfully I did. I now also carry splint material and recently have been carrying an AED (Automated Electronic Defibrillator) in my Jeep.

Eighth, have sufficient water and food. I have a water rotopax that is mounted inside my rig at all times.

Ninth, if cell service is not available I recommend a Garmin “In Touch” they work great when there is no cell service. It has texting capabilities and runs by satellite communications. I’m also considering a flare gun as an extreme way of showing our location and calling for help (the tow truck got a little lost coming in and I had to climb a peak and signal them) obviously you might not want to do this in a fire prone area. I also carry a fluorescent hot pink “frisbee” in my rig as a signal device and as a way to have a little fun, if needed.

Tenth, keep calm. There is always a way to get help. it just may take time, but if you are prepared, you can make it. 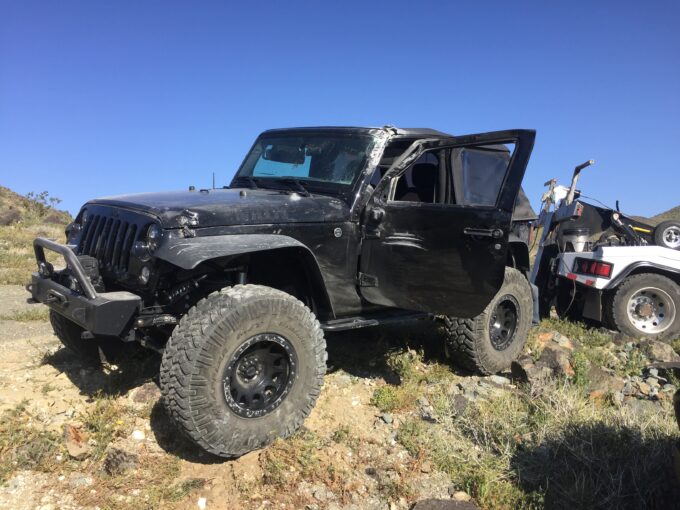 More on Being Prepared from ModernJeeper here.

The ModernJeeper Show, Ep. 77 – Scott Raflo of OCD Off Road – Building Jeeps and Wheeling the Cove