Overlanding21
10th Anniversary of an Incredible Jeep Overlanding Adventure Mexico to Canada, all dirt roads; two guys; one dog and one Jeep. Join me on...

Mexico to Canada, all dirt roads; two guys; one dog and one Jeep. Join me on this 10th Anniversary as I recap one of the most amazing adventures of my Jeeping times.

In 2009, noted adventurer and world traveler Chris Collard called me and asked, last minute, if I wanted to take a Jeep ride – a long Jeep ride, from the steel bars of the International US/Mexico border fence to the border of Canada. 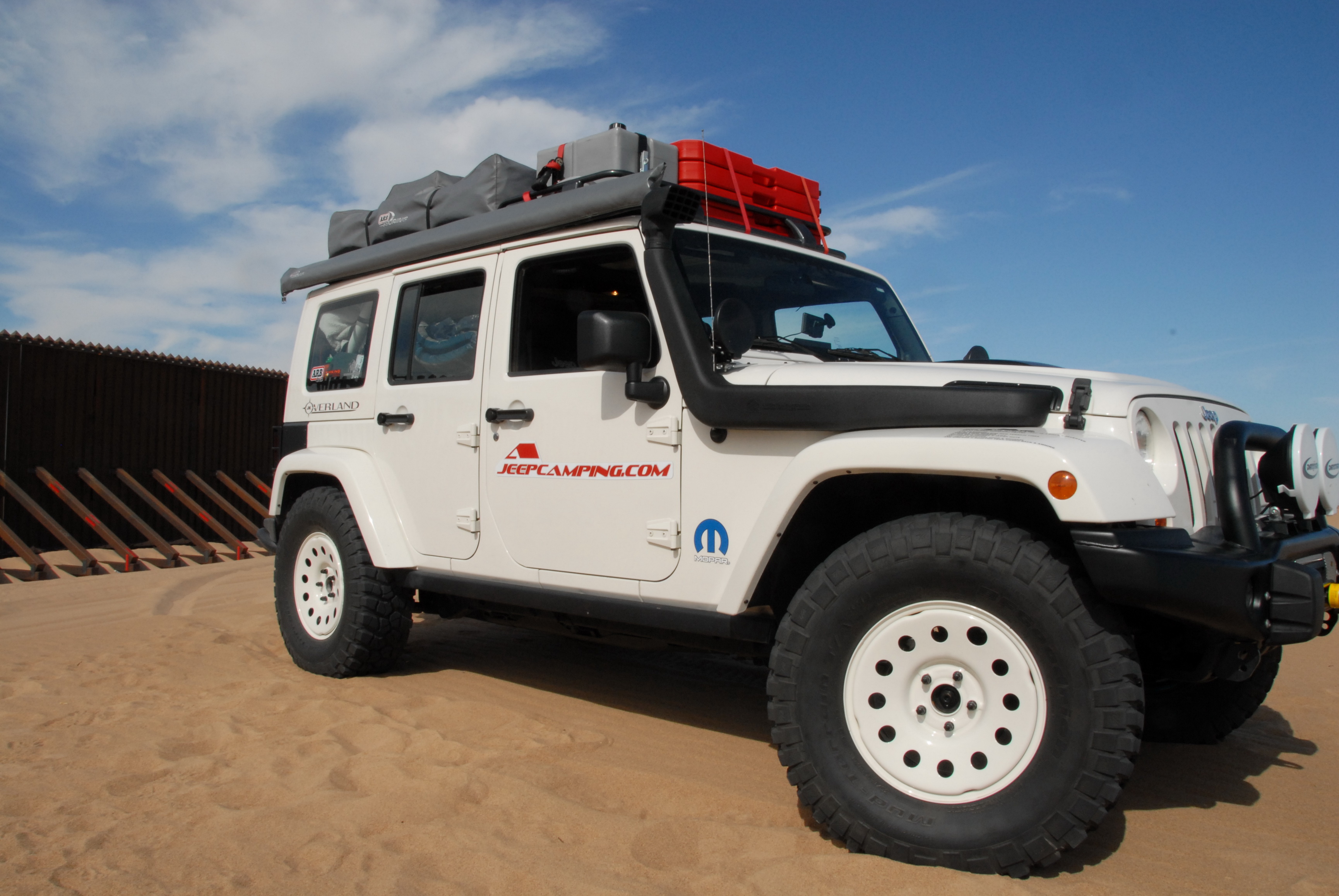 The amazing Jeep JK loaned to us from Jeep

This was to be overlanding at its very best – and worst! Chris neglected to tell me, more of an RV guy, that we would not have showers on the trail. Or that adult libations were in limited supply. Or that our days would be 12 to 14 hours long of driving while consuming energy drinks and granola bars.

Ha! I gave Chris a teasing hard time, but it turned out to be the most memorable trip I’ve ever taken.

I made it as far as Reno, NV then had to get out for a huge event. Chris’s wife Suzy jumped in at that point and finished the trip with him to Canada.

Oh, did I also mention that in the first two days we were nearly arrested by the Border Patrol, chased by a rattle snake, questioned by a BLM Ranger, and swarmed by bees?

As far as fuel, repairs and food shopping, we tried religiously to sidetrack and back-track on pavement to towns and such, but also return on that same pavement to where we left it – trying to neutralize any pavement time. For the most part it worked fine.

We set up tent camps all along the way; prepared our camp food; ate modest yet satisfying meals; always left out campsite better than we found it; stayed on designated trails and roads; and listened to a wide assortment of tunes as we bounced along for endless hours – laughing and joking the whole time.

You can read Chris’s version of the story as published in Four-Wheeler Magazine in September 2010 here: http://www.fourwheeler.com/events/129-1009-border-to-border-tour-part-1/

Enjoy the gallery of pics: 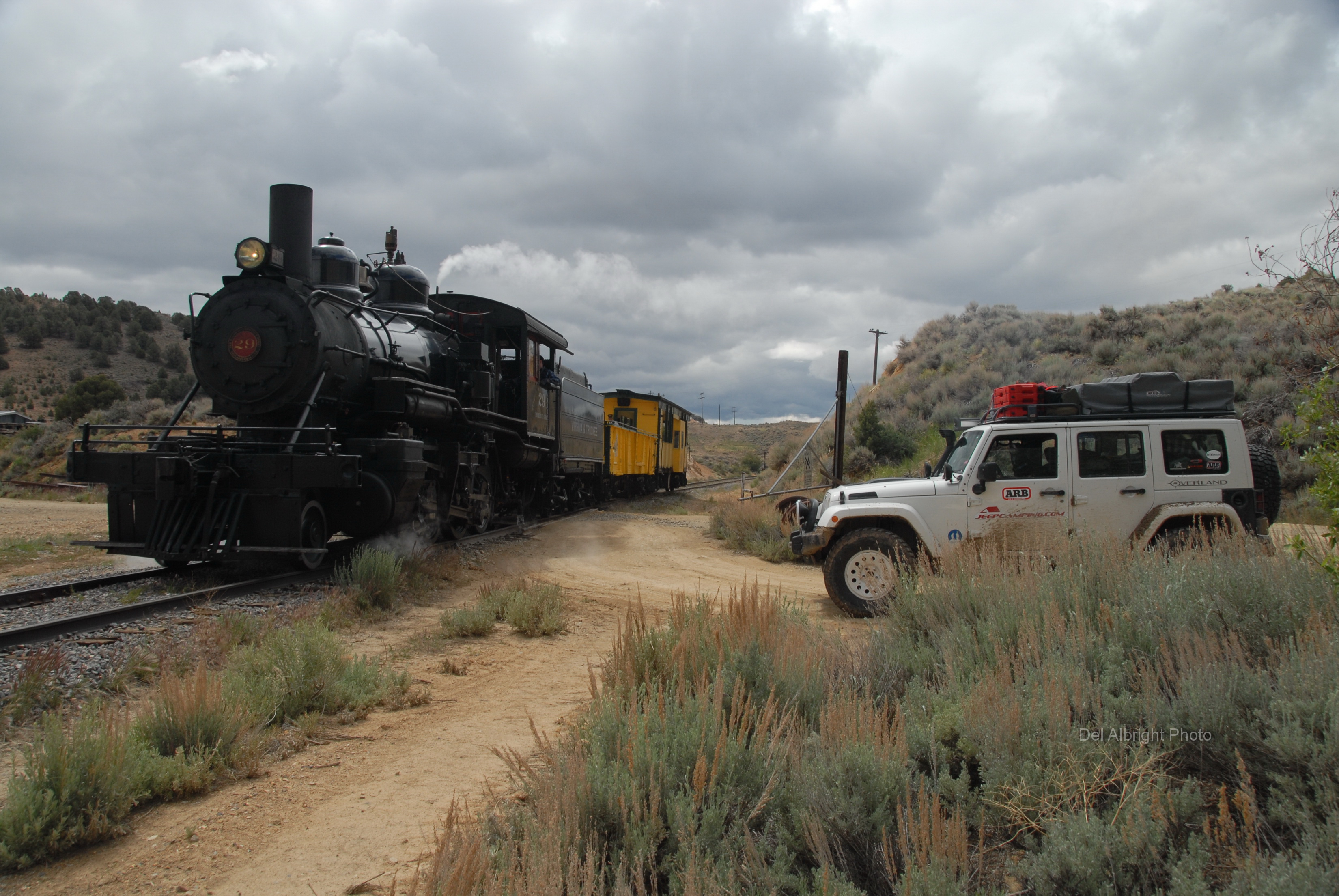 Even Jeeps stop for trains. 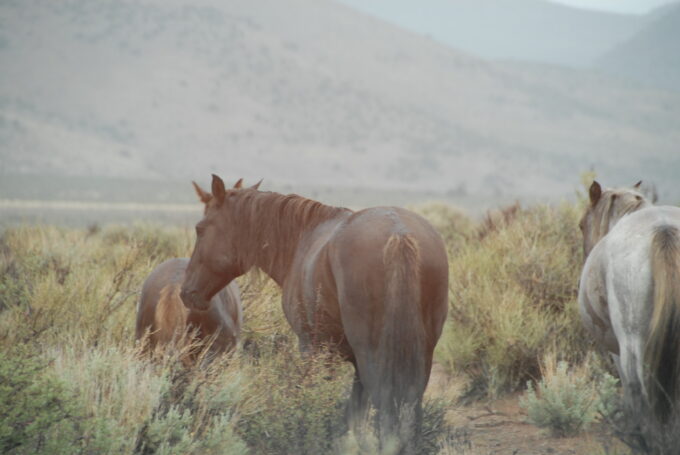 Not sure why I took a pic of this end… 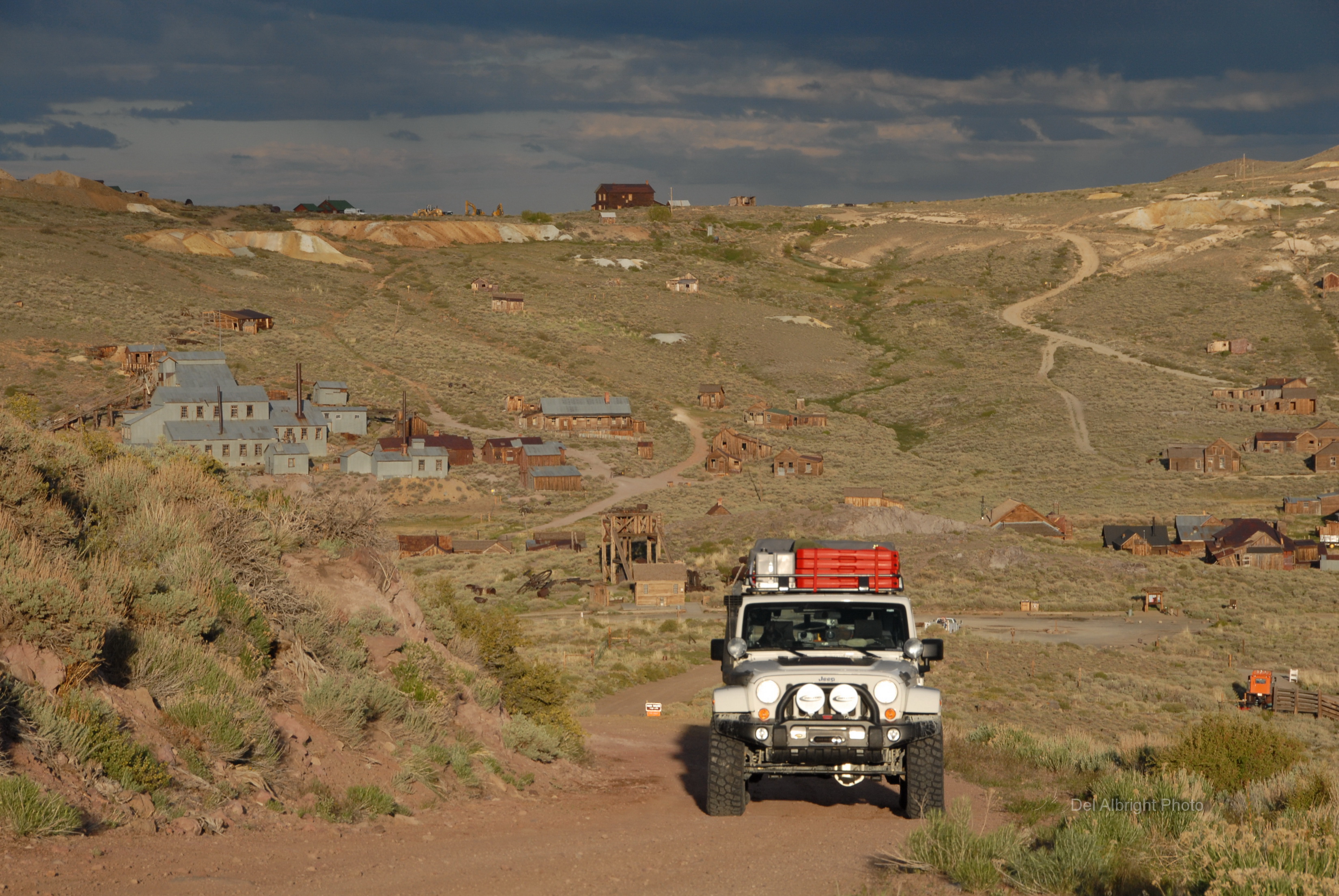 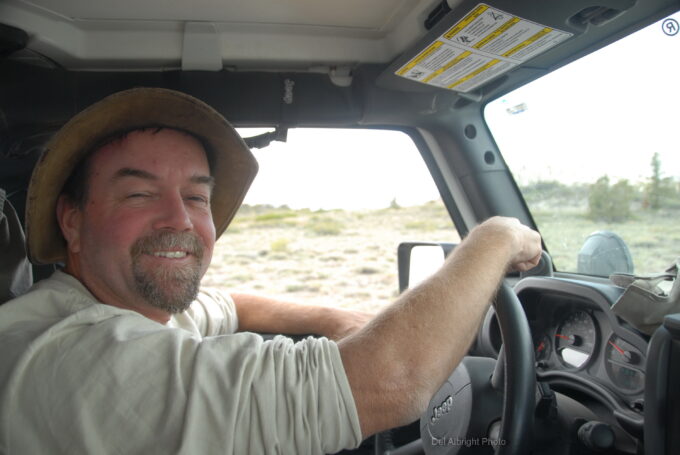 The famous, the only, Mr. Chris Collard — worldwide adventurer and explorer. 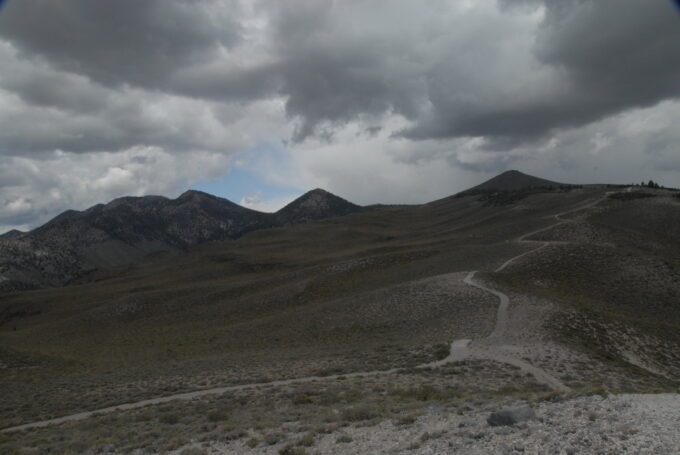 Weather was our friend for most of the trip. 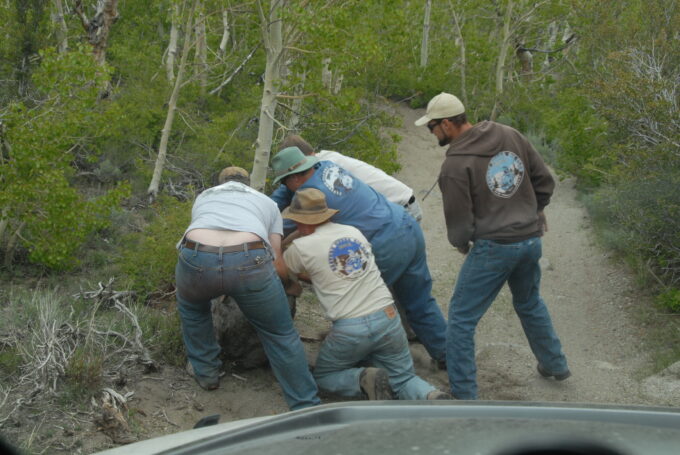 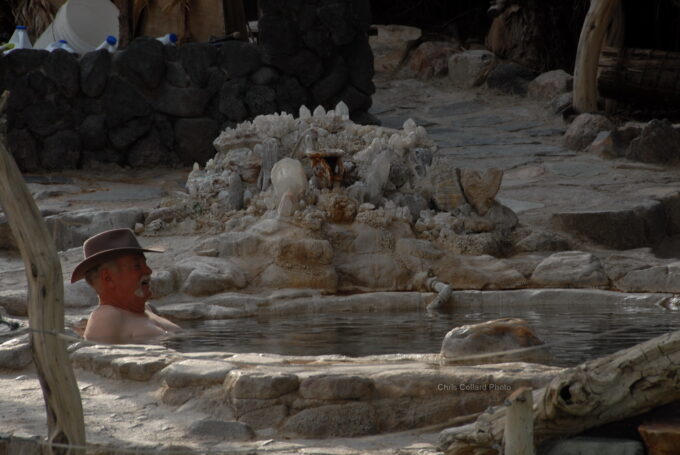 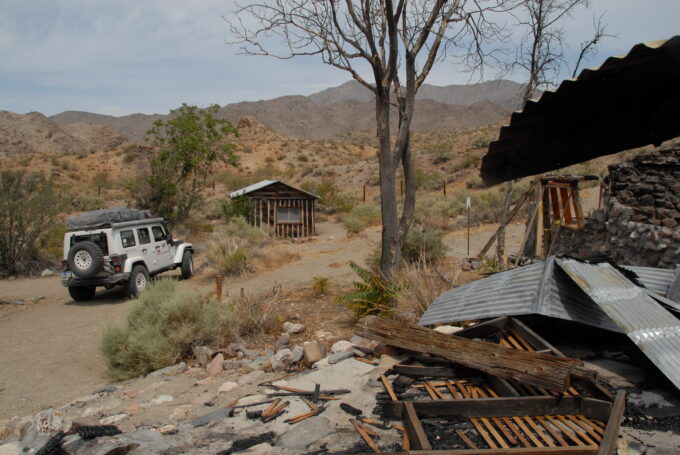 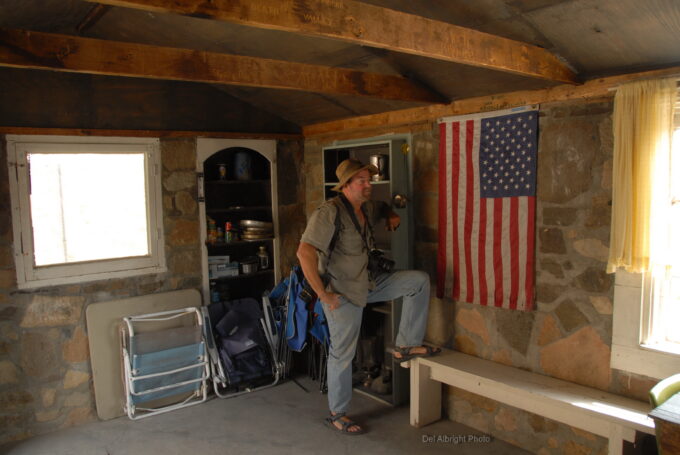 No matter how or where it hangs, it’s always a treat to find our flag in the back country. 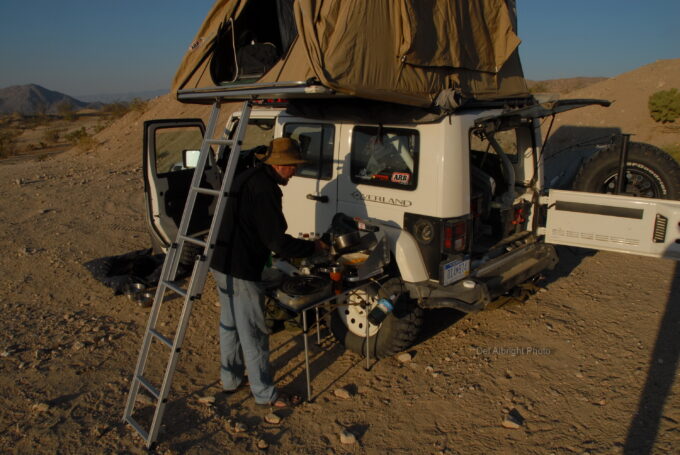 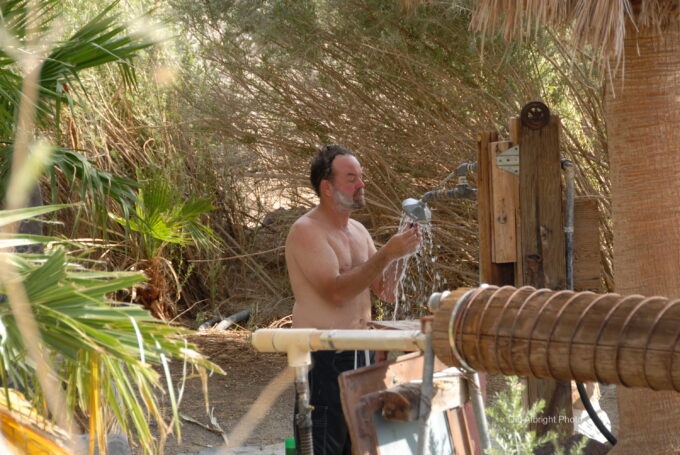 A natural hot springs in the vast desert — full of hippies and nudies (sometimes). 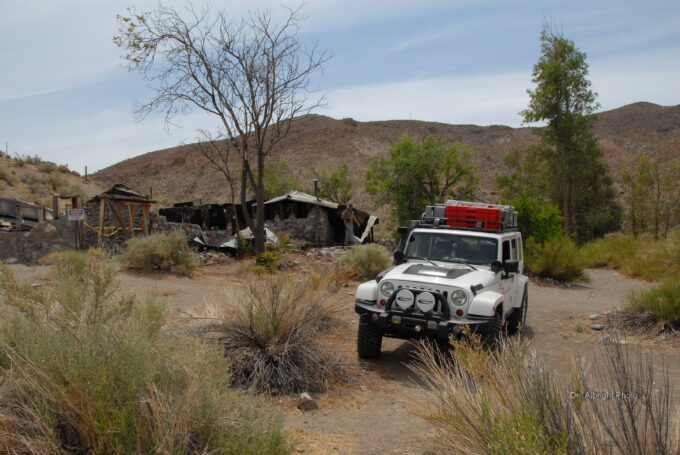 The Barker Ranch in  Death Valley where killer Charles Manson lived and was captured. 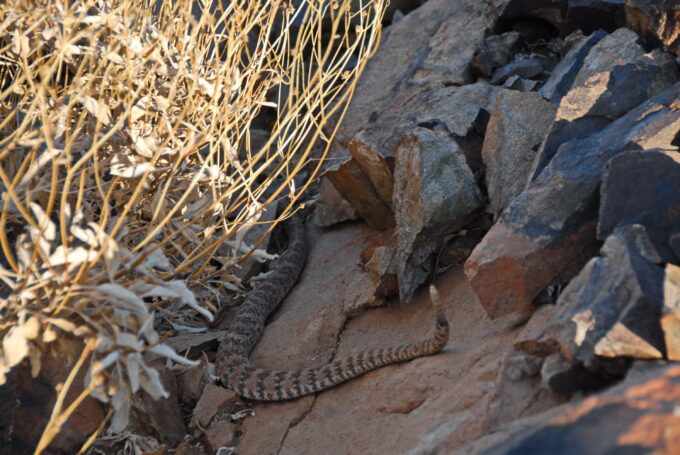 Yea, he gave Chris a good fright; but all ended well with everyone going their own way. 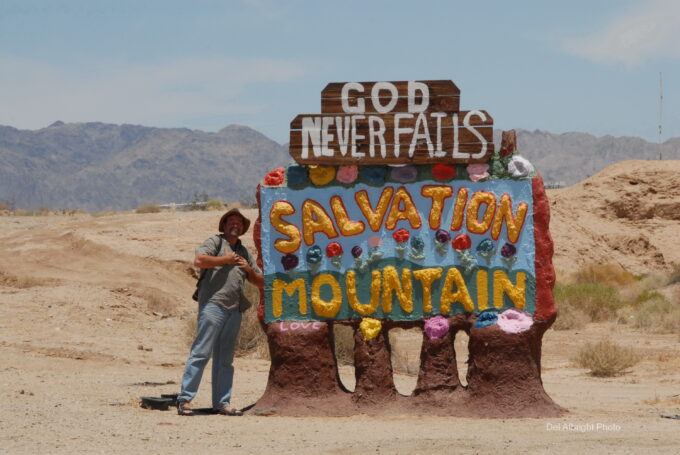 Part of the Slab City near the Salton Sea, CA. 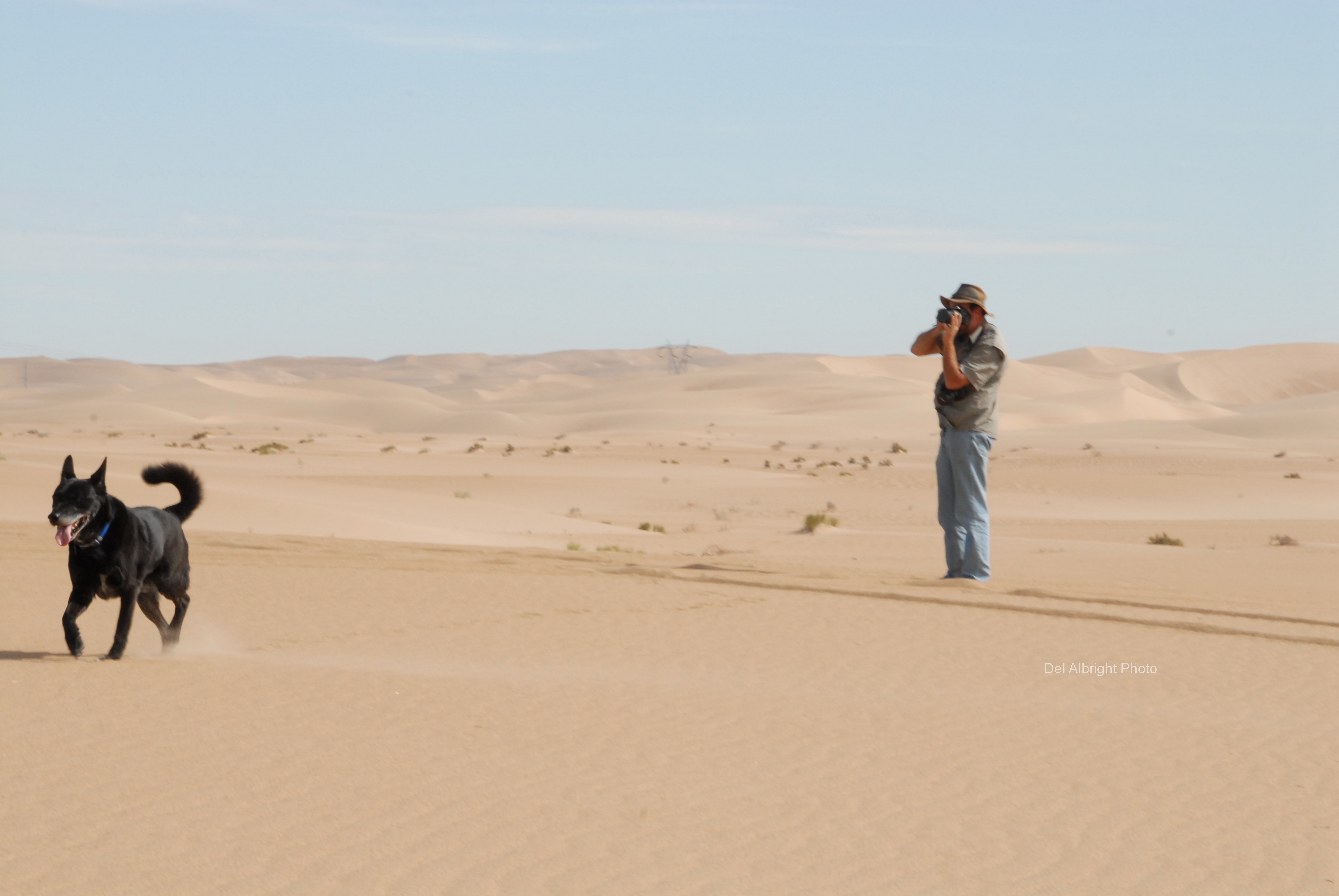 Chris Collard, the Crocodile Dundee of the Outback (in my words), and his traveling best buddy, Radar. 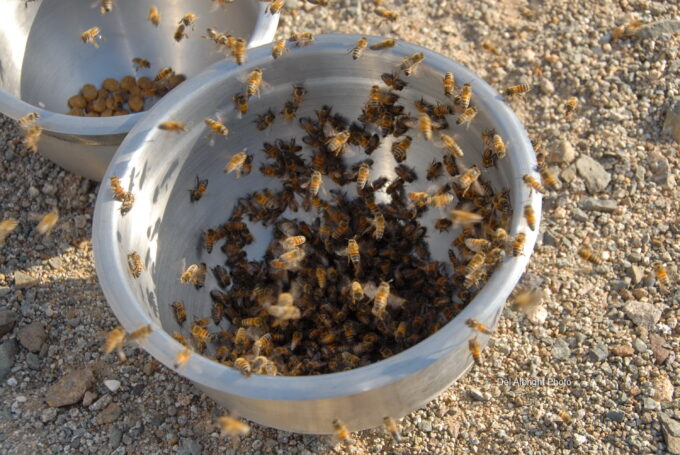 Desert bees starving for moisture swarmed the doggie dish and “drank” it dry.  They were even crawling down the boiling coffee peculator. 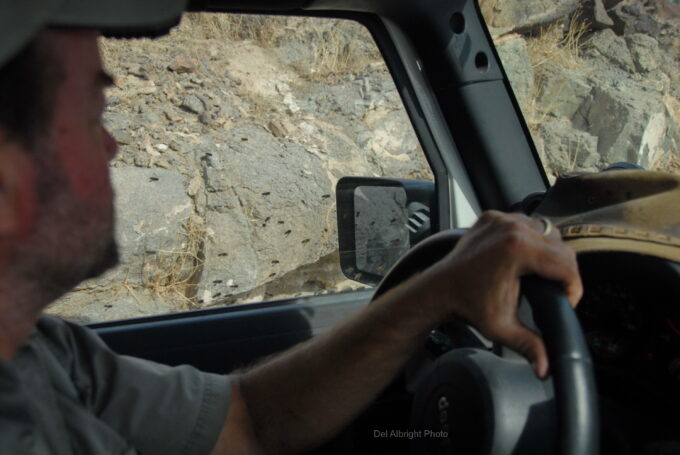 The bee swarm followed us (and our moisture scent) for 1/4 mile.  It was eerie. 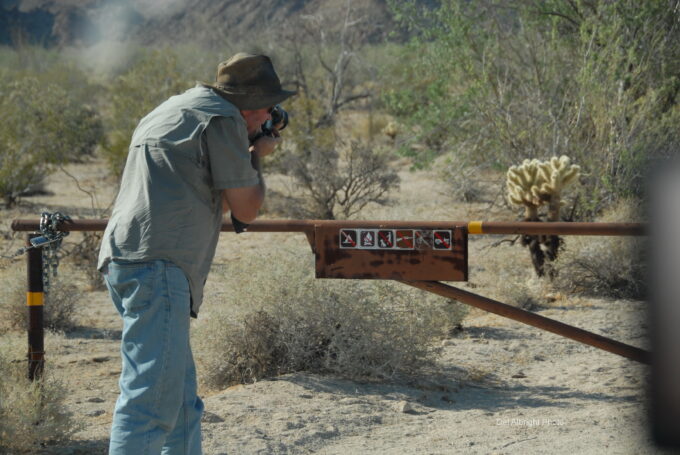 Too many times we came across closure signs and gates like this, especially in National Parks. 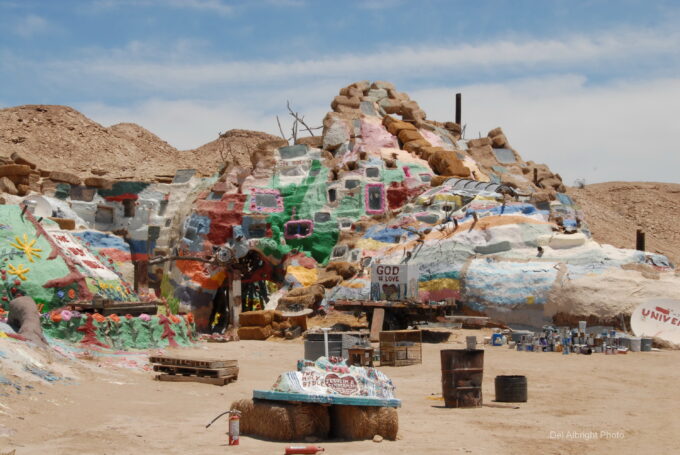 Slab City near the Salton Sea — hippies and artists in the desert. 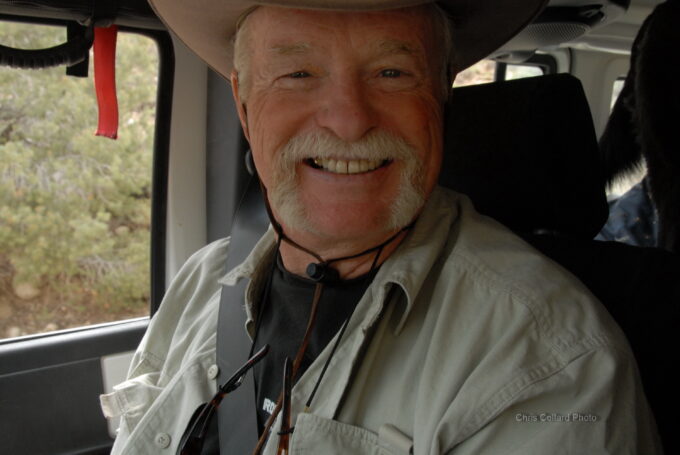 One happy desert, border to border, author and traveler.