rubicon trail8
Nearly two years ago, my good friend Sean Russel called me on a Sunday. Sean always seems to call me at the most inopportune...

Nearly two years ago, my good friend Sean Russel called me on a Sunday. Sean always seems to call me at the most inopportune time. I was elbows-deep into the engine bay of my Jeep trying to replace a leaking gasket, my hands coated in grease and grime, but I answered the phone anyway. Sean being Sean, he is always blunt and straight to the point. There is no fluff or beating around the bush when he talks. The first thing in my ear as I raised the phone to my head with my dirty hands was, “Hey man, I am writing a guide to the Rubicon Trail. I need you to write a foreword for me.” 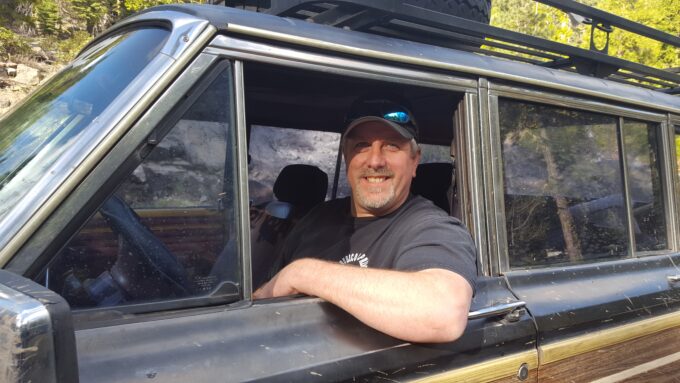 Sean is not normally this photogenic. Its just because he is sitting in a wagoneer.

The first thought in my head after hearing that, was that if a guide book were to be written about the Rubicon, Sean would be one of the very few people actually qualified to do it. Sean grew up in the mountains and grew up on that trail. His kids grew up on that trail. For many years, he had a guide company that lead groups from all over the world across the Rubicon. For a time, he was also president of the Rubicon Trail Foundation. No one person could possibly know everything about the Rubicon, there are only a “select few” actual experts on that trail, and Sean is one of them. He knows that trail intimately. It made perfect sense that he should write a guide book to the Rubicon.

The second thought that ran through my head, and the first thing I said to Sean on the phone was, “Am I getting paid for this?” Once again, Sean was straight to the point: “No.” Then after a short pause he added, “But I will float you some beers over the campfire on the club’s April trip.”

I cannot pass up free beers. I said yes. 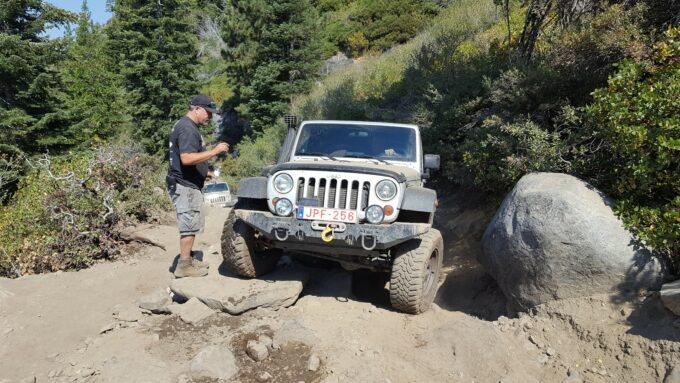 Sean guiding a group from Belgium up Cadillac Hill.

When I wrote the foreword, I had not even read the book yet. I didn’t have to. I just spoke about the trail and about the knowledge base that Sean has about it. I already knew the book would be a worthwhile read. When I finally read the finished product this week, Sean did not disappoint.

The book is entitled “Surviving the Rubicon trail: The Beginner’s Guide” and it is just that. An all-encompassing guide that empowers the reader with nearly everything they need to know in order to tackle the trail. While the book is mainly catered to beginners and first-timers on the Rubicon, even veterans to the trail can gain some knowledge from the book, especially from the detailed “equipment” section. 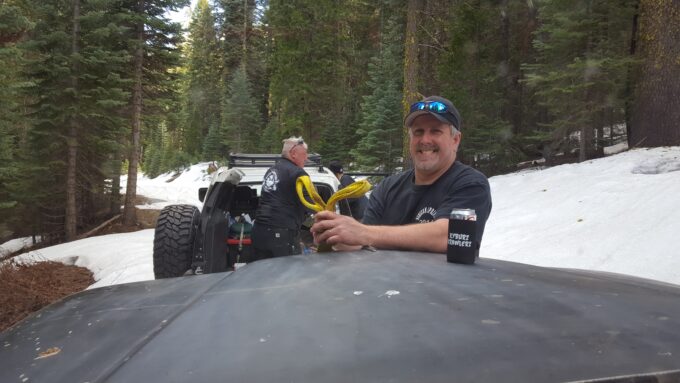 Although we would be working on a broken down rig for the next few hours, Sean was still all smiles.

Sean knows the priorities of the trail, and rightly so, the book starts off with a section on safety. The Rubicon is remote and it can be a dangerous and deadly place for the unprepared. Paying careful attention to this part, (along with many other parts in the book) can literally save your life.

One of the biggest highlights of the book, is the section on equipment. Sean lists in detail tools, equipment, parts and fluids that you will need in order to run the Rubicon. He has several key lists that make for great check-lists while loading for your tip, and breaks those lists into categories like “Repair Supplies,” “Mechanical Supplies” and “Personal supplies.” Admittedly, even I, after spending many years wheeling, had something to learn from those check-lists. I will go as far as to say that these critical lists are worth the price of the book in itself. 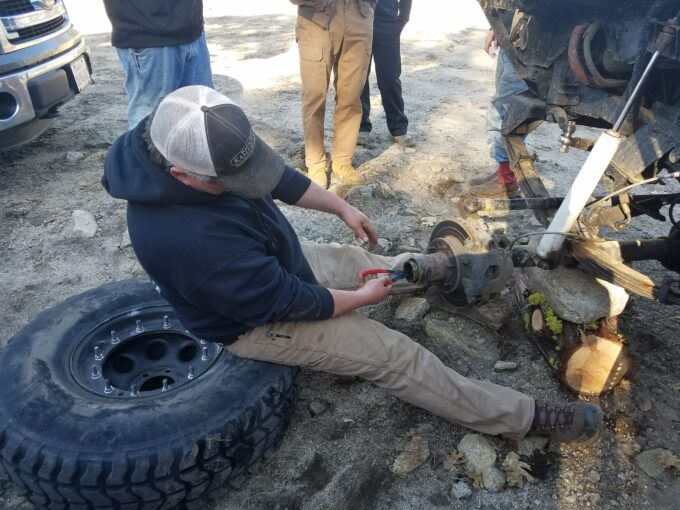 Sean is no stranger to trail repair.

One of the most common questions asked about the trail is, “Can my vehicle make it?” Sean tells you exactly what you need to know without having to get 20 different answers searching the internet.

The book then goes on to cover many different topics, some of which include: how to wheel responsibly on the trail, how to deal with emergencies and the wildlife, doing repairs on the trail, and even an in-depth discussion on our community on the trail. The book is really “all-encompassing” when it comes to what you really need to know.

The entire work finishes with a large section entitled, “Key Points on the Trail.” All of the major land-marks and obstacles are laid out for you in order and in detail. In this way, beginners to the trail will know what to expect while on it, and know what lies ahead. 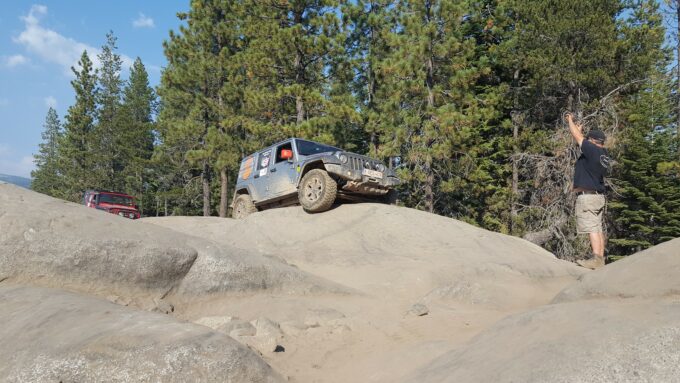 Either Sean is spotting this rig or surrendering to it.

Sprinkled throughout the book are little first person accounts, little stories from Sean’s personal experience on the trail. You can spot these easily in the guide because they are formatted in italics. In the end, I found myself wanting more of these stories, and I wish he had written more throughout the guide.

It is important to understand that Sean is a wheeler, not a writer. Everything in the work is in plain, easy to understand English and straight to the point. Just like Sean, there is no fluff. He wrote the book like he speaks. If you are a college English professor, you may want to bust out a red pen, correct some things and move some words around, but if you are wheeler that is new to the Rubicon trail and wants expert advice from someone who knows exactly what he is talking about: this book is for you. 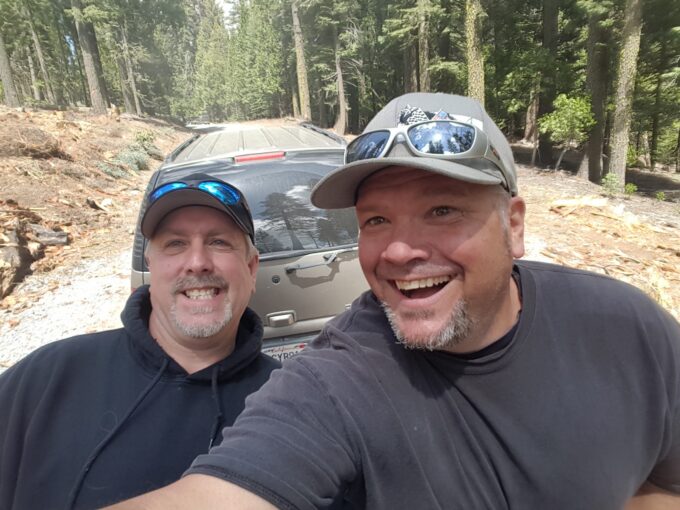 Sean can even make loading a broken rig on a trailer fun.

Yes, Sean is my friend. Yes, I wrote the Foreword to the book, and I may admittedly be a little partial here; but this guide with all of Sean’s knowledge in it, is a “must read” for anyone that is thinking of running the famed Rubicon trail. It is the most current, up to date guide book on the trail. I highly recommend it to all first timers to the Rubicon.

The book is available for purchase on Amazon.com at the following link: