What You Should Know About Your Mechanic/Off-Road Shop…

DIY3
DIY — IS IT WORTH THE TRIALS AND TRIBULATIONS? Have you ever asked yourself “Who do these guys think they are?”. Why do they...

DIY — IS IT WORTH THE TRIALS AND TRIBULATIONS?

Have you ever asked yourself “Who do these guys think they are?”. Why do they think they can charge you $95 an hour or even more!? I mean it’s not like they are attorneys or doctors! They aren’t working towards curing a disease or even helping you eat healthier! Why do these guys charge us so much money?!

We have all done it. We just bought our latest cool gadget and don’t have time to put it on ourselves…so let’s head to our mechanic friend to have him do it! Which turns into “What? How much? But it shouldn’t take but 30 minutes to install…I watched a guy on YouTube do it in 28 minutes….”.

I happen to have a case in point. An easy 60 minute job. Or at least that what it should be… 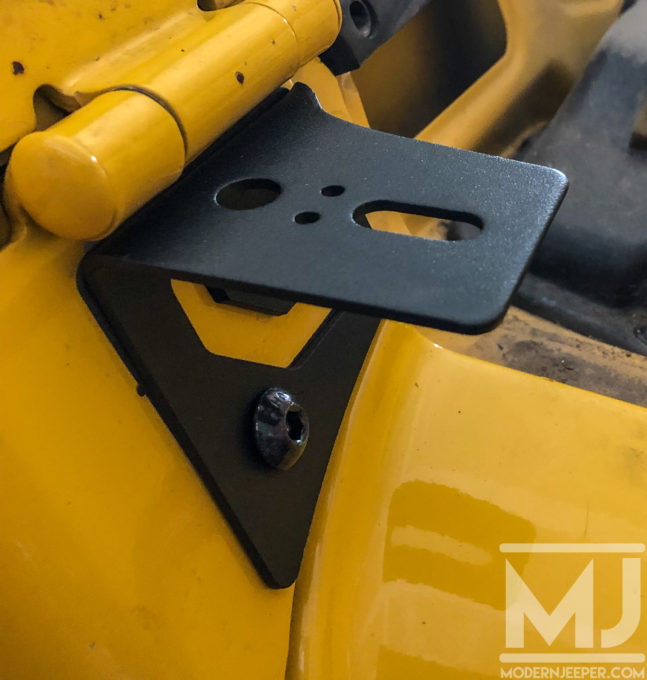 I purposefully bought some A-pillar light mounting brackets off of Amazon. Read some reviews and decided to spend a whopping $13 for the pair. These brackets allow the Jeep TJ or LJ owner to mount a set of off-road lights to just below the fold down windshield hinges on the outside of the windshield frame on their rig. Perfect. I’ve also got a set of high dollar, high quality “I’ll be able to light up the moon” set of lights. 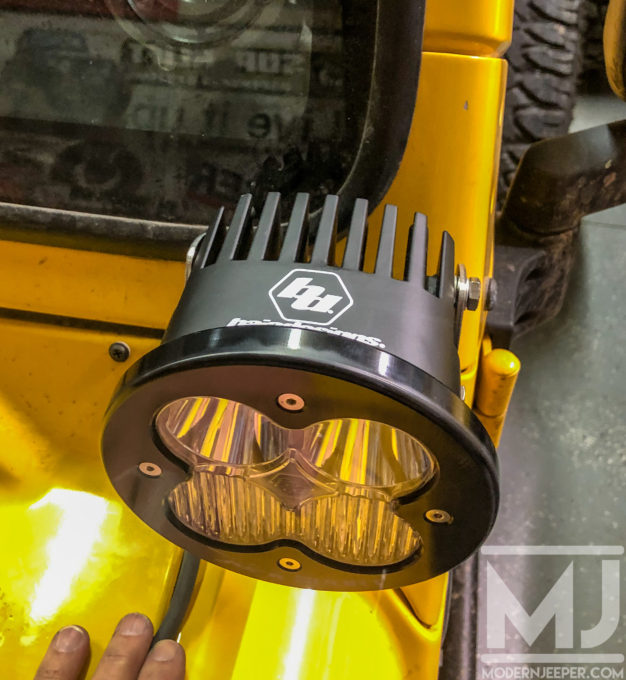 As folks that know me know, I’m not afraid to spend extra time and do a quality job…and this is just installing a set of lights. Pfffft…easy.

All I have to do is remove two torx bolts from the windshield hinges on each side, mount the new light mounts, bolt the lights to the mounts, run a few wires and I’m done! This is where your Off-Road Shop says “Well, we can do it for $1-400”. Pffft. An hour and I got this! So let’s start here: 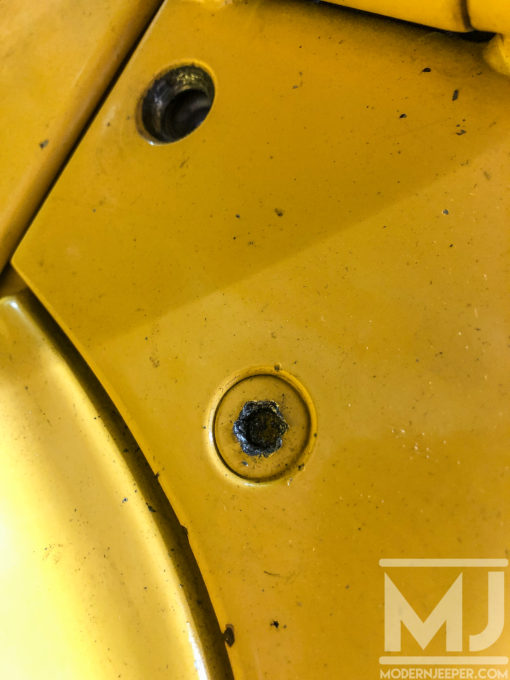 T-40 Torx bolt. Also installed with blue thread sealant on this LJ. I have good tools. Hard tools. Harder than the Torx bolt…and I was careful, this not being my first rodeo removing these. After getting the drill out…. 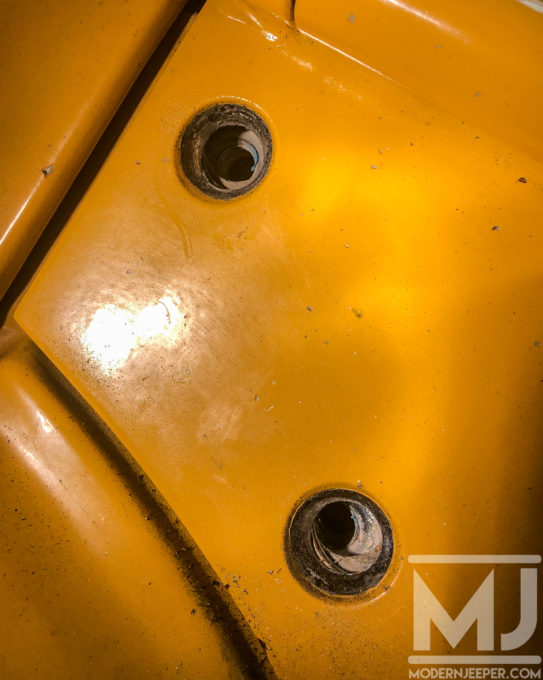 Easy peasey. I still might be done before lunch! Get the brackets bolted up using a couple of longer bolts I had lying around and a light mounted to the bracket…. 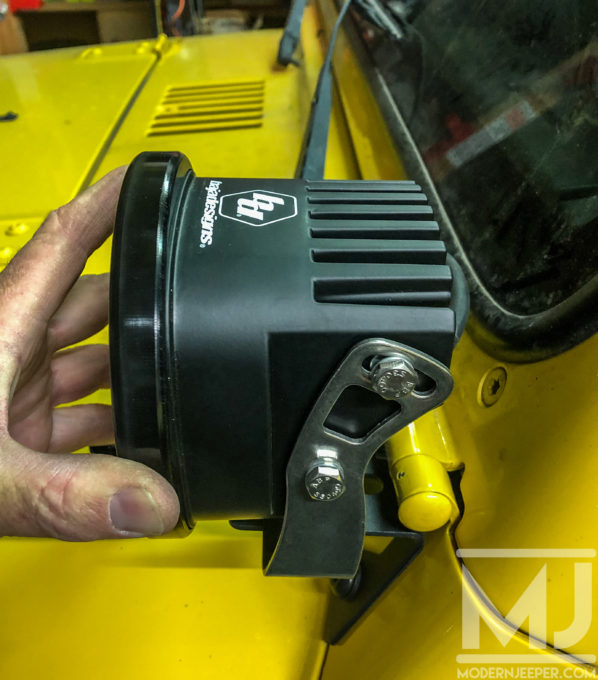 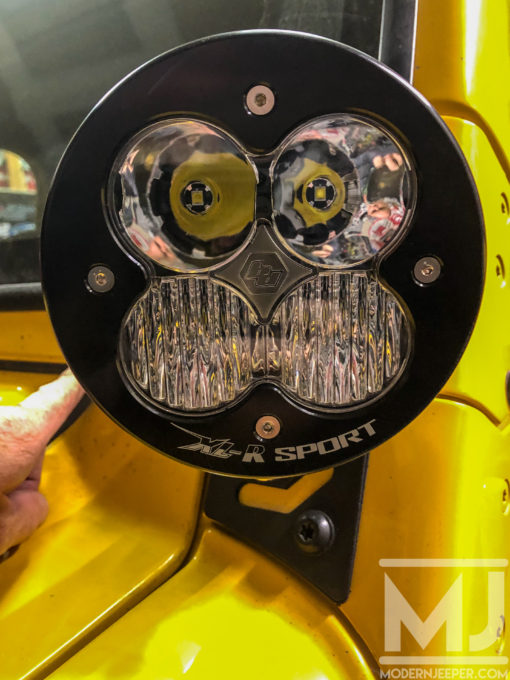 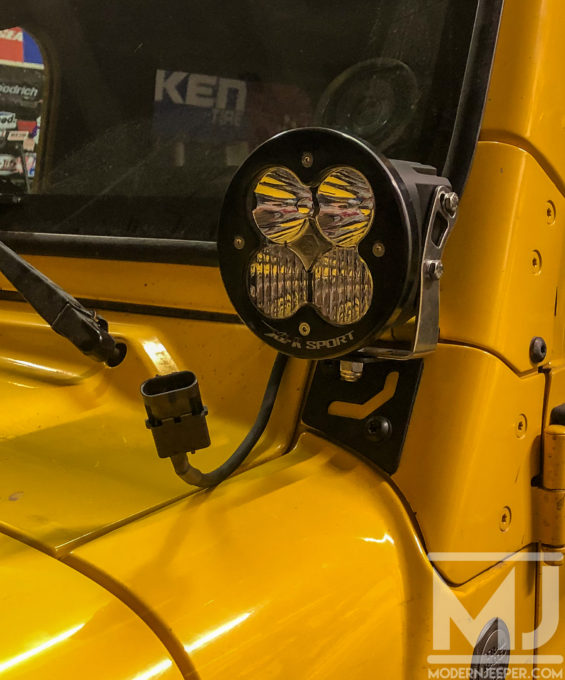 This is going super easy! Time for the passenger side…hmm… 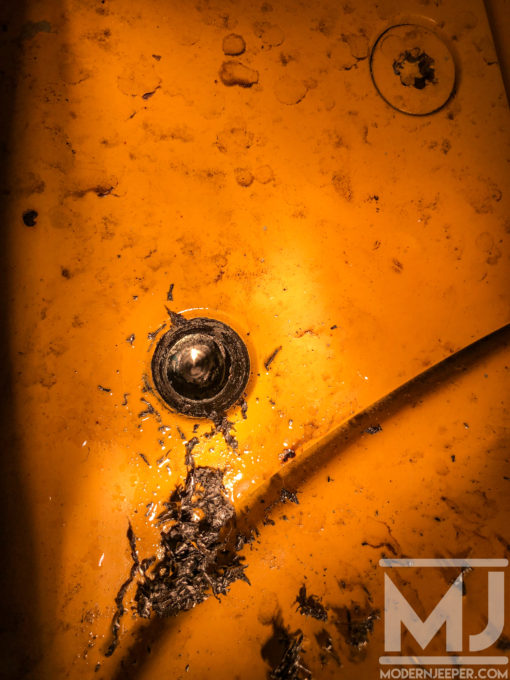 Well, this is feeling all too familiar. Stripped the T-40 Torx on this side too, and even the same location. No worries, I’ll drill it out and move forward. This side was a bit more fun as my angle wasn’t spot on hence drilling through half the nut retainer on the back side. But again, no problem. I’ll just drill and tap a new hole through the retainer plate and be good to go….said nobody ever. But it did work. Now to take off the cowl to run some wiring… 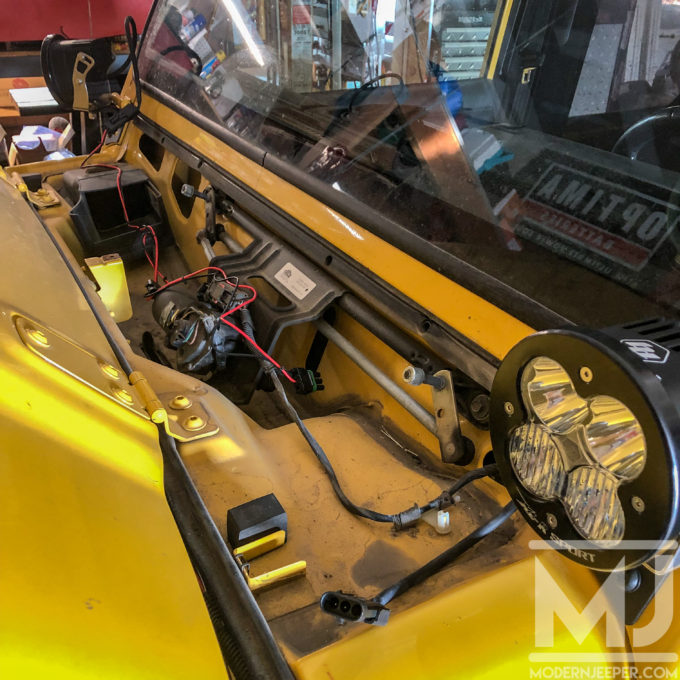 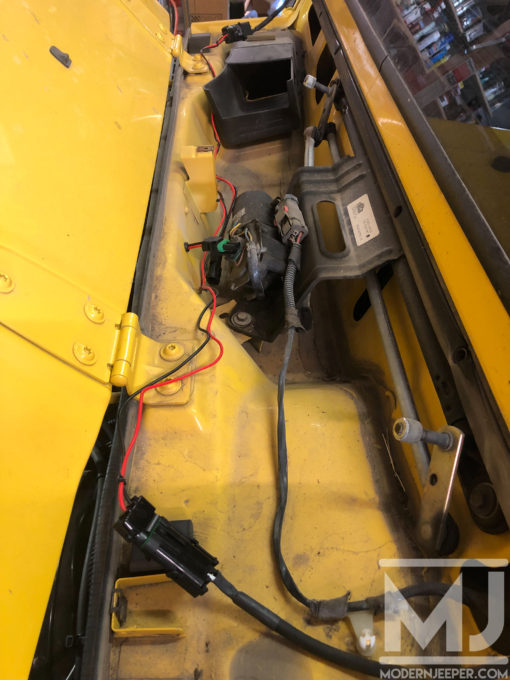 I drilled a 5/16″ hole and used a grommet to get wires into the engine bay. 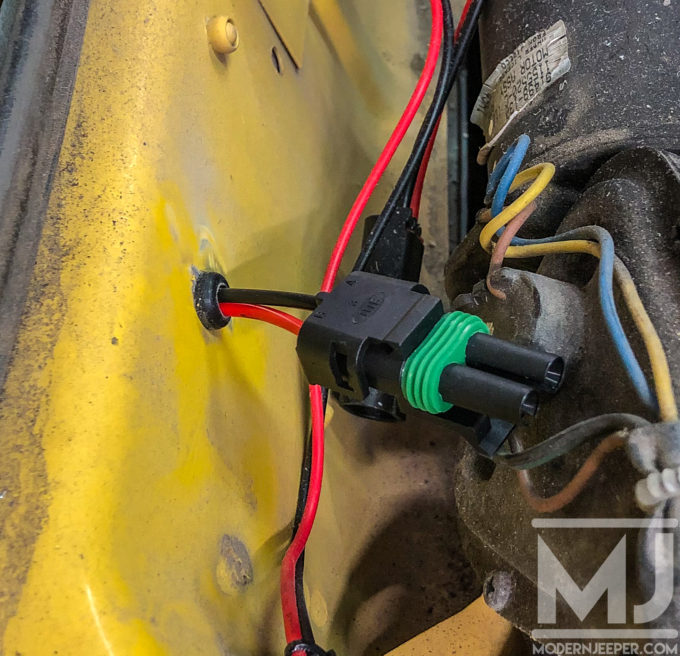 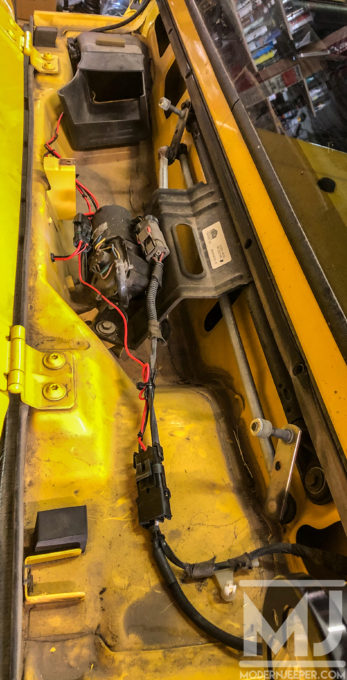 These lights won’t be operated by a switch inside the cab. They will be plugged into a port on the Warn Platinum winch. So it wasn’t necessary to run any wires into the cab which is cool. I notched a couple of the locations where the wires from the lights would run into the covered cowl area: 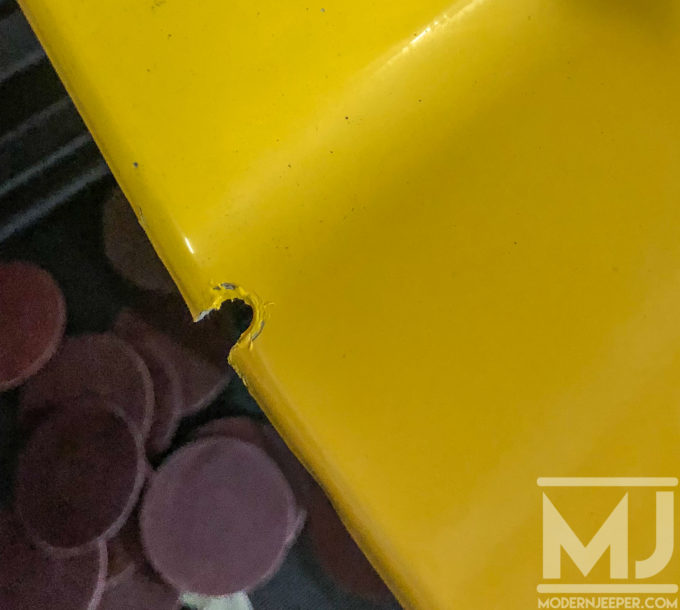 So at this point the lights are mounted on to the brackets and the wiring is run not the engine compartment nicely. Time to tighten the lights up… 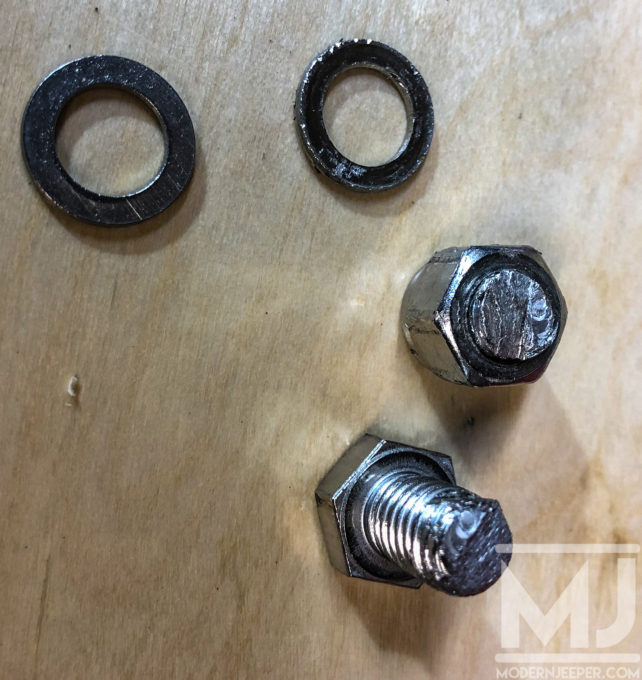 This is the mounting stud that was provided to attach the lights to whatever mount you chose. It threaded on just fine but once the nylock engaged, it began to cross thread. I continued to tighten it as the nut threads were fine…until the nut became too tight before engaging the bracket. No worries. I’ll nut back it off and find another bolt and nut…until the nut crossed up again on the way off. Ugh. A sawzall to cut the bolt in half was the only solution. A new bolt and nut made quick work of attaching the light to the new bracket. 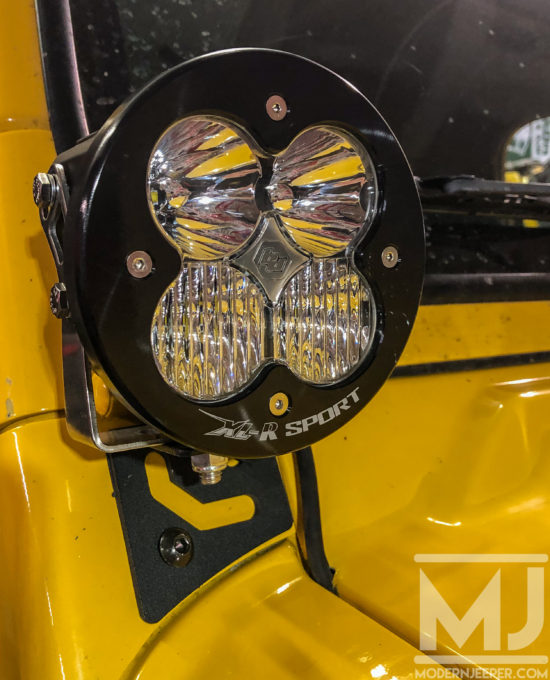 By the way, the $13 brackets were perfect and awesome.

As I look at my watch it’s 3:00. I started at 10:00 am. All I have left to do is wire them to the power port on the winch…but I think that I’ll call it a day for now. The next time your mechanic tells you it can cost between $1-$400 to install your lights….go with it…because he’s exactly right.

Stay tuned for part 2 where we power up these Baja Designs XL-R Sport lights through the Warn Platinum 10-S!