emergencies2 safety1
EVEN THE BEST LAID JEEPING PLANS CAN GO BAD One summer several years ago, my buddy Kris and I planned a four-night, weekday trip...

EVEN THE BEST LAID JEEPING PLANS CAN GO BAD

One summer several years ago, my buddy Kris and I planned a four-night, weekday trip on the trail with our kids. While the weekends can get busy, camping on the trail during the week ensures that few people are around and you can enjoy your camping and wheeling in the high Sierra in solitude.

Even the best laid plans can go South, and despite our goal of making it to the Loon Lake kiosk by noon, we did not start airing down our rigs at the beginning of the trail until the late afternoon. It was no big deal, we were not on a time limit, and instead of bombing down the trail to make Buck island which was our original destination, we figured we would just cruise and pull over wherever to camp a little before sunset.

We moseyed our rigs down the trail at a leisurely pace, enjoying the fact that we had the entire Rubicon seemingly to ourselves. As the red glow of the setting sun lit up the western skies, we pulled off the side of the trail, re-built the fire-pit, unloaded our tents and gear, and began making dinner. 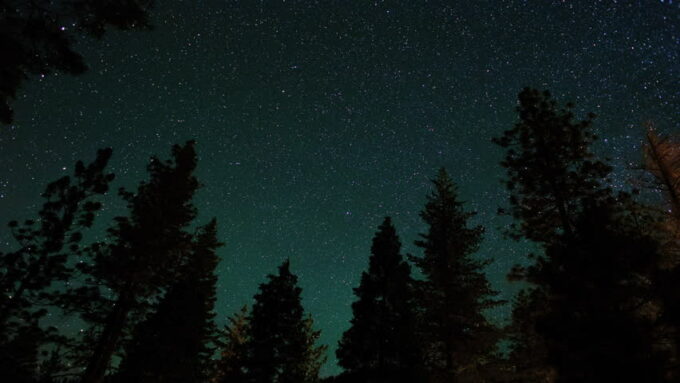 It was the a quintessential high Sierra Nevada night. We were surrounded by towering pines that were back-lit by a gorgeous star-filled sky that is impossible to see anywhere near civilization. We leaned back into out camping chairs and enjoyed our small, crackling campfire in comfort.

About an hour after sunset, we heard several rigs rumbling slowly down the trail towards us. It was almost as if we had went back into time into the 1980’s, as a small group of moderately built, “old guy” CJ’s rolled past us, driven of course…..by old guys. They smiled and waved along with their wives as they slowly made their way past us headed father down the trail. The rumble of their rigs slowly faded away as they put distance between us. It looked as if Kris and I were not the only ones getting a late start.

A good forty-five minutes later, Kris and I were contemplating crashing out and going to bed to get an early start and make the Springs the next day. Suddenly Kris kind of perked up in his chair and said, “Did you hear that?” I had heard nothing but the cracking of the burning pine logs in our fire. “I hear yelling or something” Kris exclaimed.

We walked out onto the trail farther away from the noisy, sap-ridden fire to try to hear better. Sure enough, off into the distance down the trail, in the direction the old-guys had went, was a female voice. Not screaming….but wailing. Something was not right.

“Let’s just go check just in case” Kris said as he grabbed his medic kit and tossed it into his rig. We hopped in, and bounded down the trail much faster than we had earlier in the day. Things got weirder as we rounded a bend in the trail, and I saw a figure in a red shirt with a flashlight running past us in the woods, headed back towards the start of the trail.

Nearly a half-mile down the trail, the headlights of our rig lit up a scene that no one want to see. One of the CJ’s was on the side of the trail flopped, laying on it’s driver’s side. On the ground next to the rig was a man in his mid 60’s, on the receiving end of CPR, by a man who we would later find out was his son. Over near a fire-pit and several tents were two woman trying to console a panic and grief stricken lady who was the source of the wailing that we had heard.

As my brain took all this in, I froze with inaction, unsure of what to do. A medic by trade, Kris reacted differently and instantly hopped out of his rig with his medic kit, yelling at me to get on the ham radio and call for help. Before I knew it, Kris had taken over doing compressions on the man.

One of the older gentlemen tearfully informed us that they had sent someone running out the trail with a cell phone to hopefully find a bar of cell service, or someone at the trail-head with a vehicle that could drive him far enough to get service an call 911. This was obviously the man who we had passed a little father back down the trail. They did not have a ham radio – about the only reliable way to call for help on the Rubicon Trail because of the repeater installed by Friends of the Rubicon and RTF. 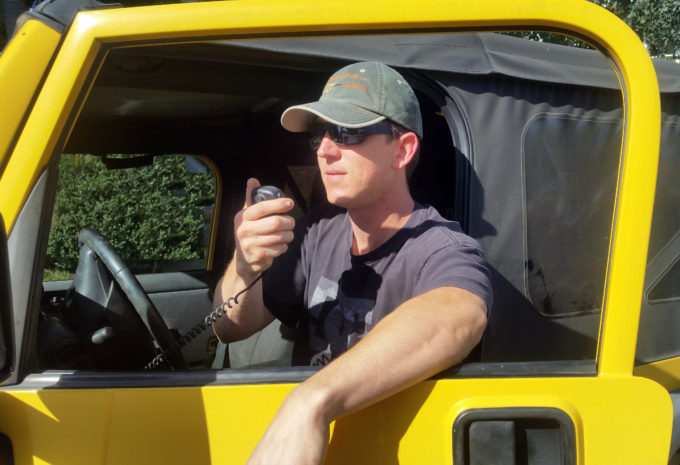 When disaster calls, ham radio answers on the Rubicon Trail

We would find out later, that after they had unloaded their rigs and set up camp, the man who was hurt wanted to pull his rig forward just a few feet to make more room for a tent. Unbeknownst to him, sometime before they made it to camp, his passenger side front shackle must have hit a rock, and was pushed back up against the frame of the rig. This in turn, super-arched the leaf spring, not allowing for any up-travel. Since he was only moving his vehicle a few feet, he hopped up onto his seat and pulled forward without bothering to buckle up.

Normally his rig would have just crawled over the boulder in front of his passenger front tire with no issue, but with no up-travel from the over-arched spring, it flopped the rig on it’s side. Without doors on the vehicle, he slid off the seat as the Jeep slowly tipped. Still holding on to the steering wheel, the lower half of his body hit the ground first, then his Jeep slammed onto him with his body at a weird angle, crushing his pelvis and his legs and pining the lower half of his body between his vehicle and a slab of granite. As the others in his group rushed to lift the Jeep just enough off it’s side to extract him from under it, he went into cardiac arrest.

Kurt and Kris: Always belted up!

As I stood off to the side trembling and holding the HAM radio after making the call for help, Kris shot me a knowing look as he was doing chest compressions. His eyes told me everything without Kris saying a word. The man was not going to make it. His body was cold by the time the life flight landed.

It seems like wearing a seat belt is a common sense rule that everyone follows. But not everyone does. Especially if you are just rolling really slowly down a mild trail or moving your vehicle in camp like this gentleman was. when it seems like nothing will happen. Many newer off-roaders incorrectly assume that the slow speeds we crawl on the trail equate to less of a chance of a fatal wreck. Nothing could be further from the truth. You never know what could happen, and you ALWAYS need to be belted in. Had this man worn his seat belt, it may have just been a minor flop as opposed to a total tragedy.

While five point harnesses are much safer in 4×4’s on the trail, the major problem with these types of belts is that most people who have them do not wear the entire harness when trail riding, they only wear the lap belt. It may be a comfort thing as 5 point harnesses do not allow you to lean forward, or it may be a lazy thing because it takes longer to strap yourself into one, but if your vehicle is equipped with them, make sure all your occupants and yourself are wearing the entire harness. 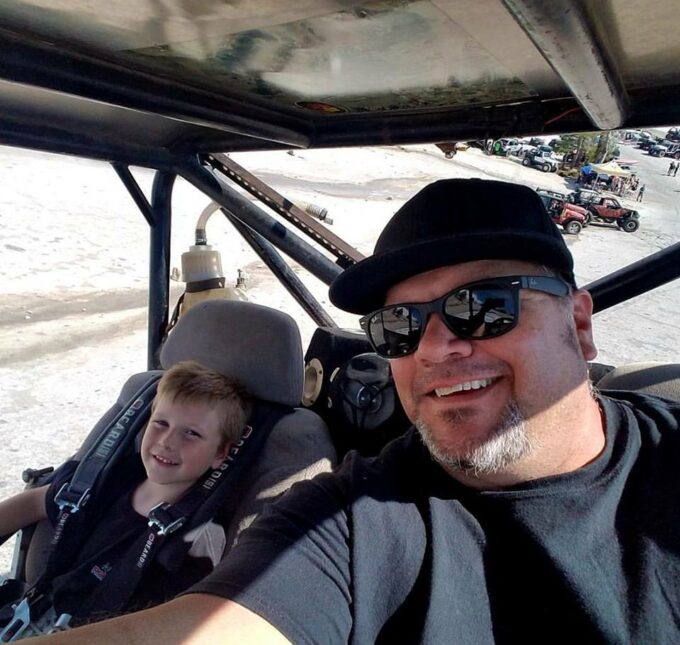 Make sure your little ones are belted in before you are!

Not only do you want to make sure that everyone is belted in correctly, make sure that everything in your rig is strapped down so you do not yard-sale your gear in a roll or a flop, or even worse have something like a loose Hi-lift whack you in the head. NEVER grab a roll cage if you are a passenger, you could loose your fingers. If your vehicle does not have interior “oh-shit” handles, you will want to fab them up or have your passenger hold onto the harness belts. When passengers do not have something to hold onto, a common reaction is to stick their arms out the vehicle to “stop” the roll. I have yet to see that work. 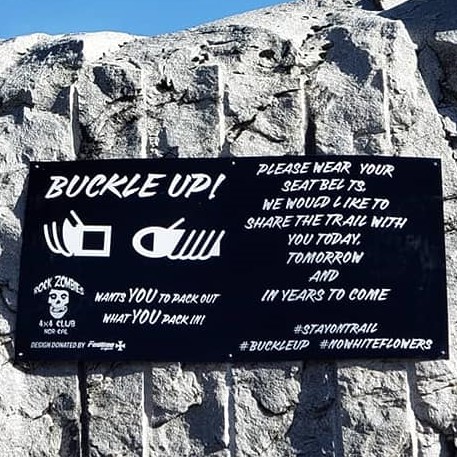 This past weekend on the Rubicon one of the premier hardcore 4×4 clubs in the world, The Nor Cal Rock Zombies, hung a banner in the spillway at the beginning of the trail imploring people to belt in. Maybe if all of us could support our sport like the Zombies by being active in land-use issues and educating people on proper use, we would have more trails and more people alive.