Professional race car driver, 2009 King of the Hammers, Ultra4’s 2016 National Champion, and a Modern Jeeper, Jason Scherer, didn’t even have a car to race on day one of the 5th Annual Metalcloak Ultra4 Stampede held May 9 & 10 at Prairie City SVRA in Northern California. While getting ready for his afternoon practice, the new motor in Jason’s race buggy decided to hydro lock leaving Jason without valuable seat and practice time before the main races on Saturday.

Making the switch from a desert race car setup to a short course race car setup takes more planning and wrenching than one may think. An effective game plan may require a last minute (and sometimes) demanding performance by the many dedicated folks who are a part of Mr. Scherer’s race team, Rage 4th! Jason’s crew chief, Adam McGough, knows just how unpredictable race prep can be, “It never fails, no matter what type of racing or how big your team is, you always run short on time.” Certainly not Jason’s style by any means and waiting on parts slowed the important prep process. The day before the race, Jason and Adam trailered the car 6 hours away to Southern California to dyno tune the new tall deck LS7 engine tucked inside. After visiting the guys at Redline Performance, builders of the engine, Adam shared that “although you can never have too much power, we left far from disappointed. Not only did they (Redline Performance) build a strong engine but they have the ability to make it run well.” 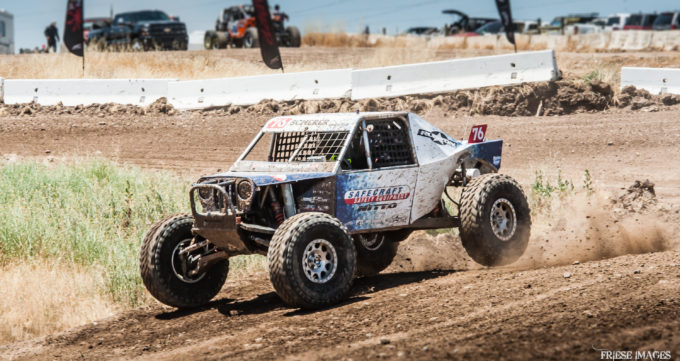 The Metalcloak Stampede runs a tight two day schedule – day 1 includes practice runs and the all important qualifying runs.Jason’s car showed up at the racecourse that day around noon – missing any opportunity for a practice lap before the qualifiers.

After a few casual laps around the pit area, Jason returned to his pit to get suited up. Roaring to go, he jumped back in the driver seat, hit the starter butto… and… thud! “We attempted to restart the engine, and it was obviously hydro locked. My crew pulled all the spark plugs and found cylinder #1 full of water” Jason explained.

With the unfortunate surprise, the team decided to pull the cylinder head off the engine and, after isolating the failure, Jason articulately applied the perfect amount of JB Weld inside the intake port where the water was leaking through intending for it to dry overnight. Five guys from the team including Jason tackled the tedious task… in the dirt… until 3 in the morning (around 1 a.m., the team insisted Jason go to bed). “They let me stay somewhat rested,” he stated, “and that was rad! I know I have a really good team… the difference is in years past, between what’s happened with Ultra4 and the team being so awesome and what it was when we started, those guys know that my work is done on the track, not wrenching on the car. Come Saturday morning, the guys were all wasted but they did their job on Friday night and I got to do my job on Saturday.” The team put everything back together Saturday morning… and fired it up. 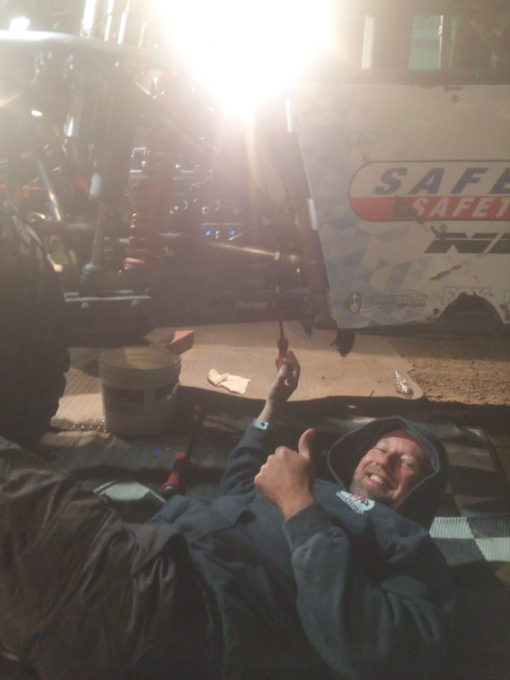 RACE DAY – HEAT 1: Jason started dead last in his first heat on Sat. “The motor was running great!” he said. So great in fact, that by the end of only his second lap, Jason moved up to take the lead! Having missed practice the day before caused a little uncertainty and disorientation on the course. Jason drove his first 2 laps concentrating and focusing so hard on picking off cars, that once he got the lead, he didn’t know which way the course went. “It made it really funny” Jason hysterically recalled. Winning his heat race, Jason will start 3rd in the main.

RACE DAY – THE MAIN EVENT: Starting in third place, Scherer knew he only had to pass 2 guys to complete his goal for the day. And by lap 5 he was holding a commanding lead on a field that included the incredibly speed of Levi Shirley in second place. Unfortunately, with only 3 laps remaining, Jason’s car suddenly lost oil pressure, forcing him to pull off the track, much to the crowd’s chagrin. Levi Shirley would go on to get his first Ultra4 win that day. Later that day the team would discover that the oil pump belt system had failed. “It was a pretty big bummer, we spent a lot of time doing R and D (research & development) on a dry sump belt system. The problem with new parts is sometimes they fail.” Though not anticipated, Jason and his team are focused on finding a solution for the next race. “We’ll get that belt drive system figured out.” he says. “Bummer… but… we did everything we needed to do.” 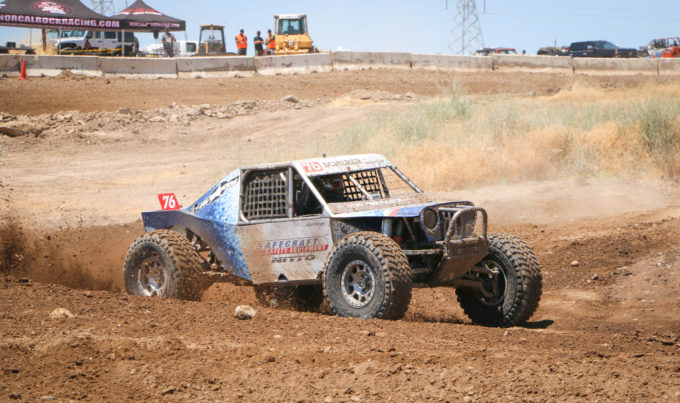 “We put together a good team, got back up to the front of the race, we lead the race, and we had the fastest lap time.” Even though Jason didn’t finish the race, he explains what makes these facts important – “It keeps a team motivated.” On Friday afternoon, the team couldn’t help but be discouraged. But with hard work they went from the back of the pack, to the front, had the fastest car, tried some new things and one of them failed. Jason stated, “No one put their heads down after that race. We all felt like… ‘hey, we ran a great race, our team is awesome,’ and they’re the best guys in the business you could ever ask for! The car is fast! The motivation is still there.” Jason obviously puts a lot of trust in his crew. “In this sport, we’re switching from a hobby to a professional level race team and its happening right in front of us!” Jason reminds us of his fellow Ultra4 drivers in his class who have chosen to race full time now, like Eric Miller, and Loren Healy. “Even when the cars get better, the competition has gotten stronger every step of the way. Winning the championship last year, we were burning the midnight oil, and at some point you kind of run out of that steam to do it unless you get more help.”

It appears Jason and his Rage 4th team have all the talent and tools needed for success… which in this case… you can never have too much of!