The Company ranked second in the EU30 market for BEV and LEV sales (less than 1k vehicles gap with LEV leader) and third in the U.S. market for LEV sales(6). Stellantis’ global BEV sales were up nearly 50% y-o-y to 136k units in H1. The Company now offers 20 BEVs, with an additional 28 BEVs to be launched through 2024.

Transformational Partnerships: Announced global, multi-year agreements with Amazon and Qualcomm that will transform the in-vehicle experience for millions of Stellantis customers.

Enlarged Europe: Achieved AOI margin of 10.4% up 160 bps, EU30 market share at 21.2%, down 190 bps. The Fiat New 500 was the number one selling BEV in Germany and Italy and the Peugeot e-208 was the best-selling BEV in France. Jeep Compass and Renegade were the number one and number two best-selling LEVs in Italy. Peugeot 208, Opel Corsa, Citroën C3, Fiat Panda and Fiat 500 represented five of the EU30 top 10 selling vehicles.

Other Regions: All three regions achieved double-digit AOI margins. South America: more than tripled AOI to €1.0 billion, with 13.9% margin. Market leader in the region with 23.5% share. Fiat was the top-selling brand in the region and Jeep top-selling SUV brand in Brazil. Middle East & Africa: record AOI margin of 15.5% up 580 bps and AOI of €472 million; market share up 20 bps to 11.9%. China and India & Asia Pacific: AOI margin of 13.4%, with AOI up 40% to €289 million. The all-new Jeep Meridian and Citroën C3 launched in India and deliveries began in June and July, respectively.

Maserati: On the path to double-digit profitability, with AOI margin of 6.6%, up 330 bps. AOI more than doubled to €62 million. All-new MC 20 Cielo unveiled in May; launched all-new Grecale with first deliveries in Europe at the end of June and unveiled limited edition Supercar in July. 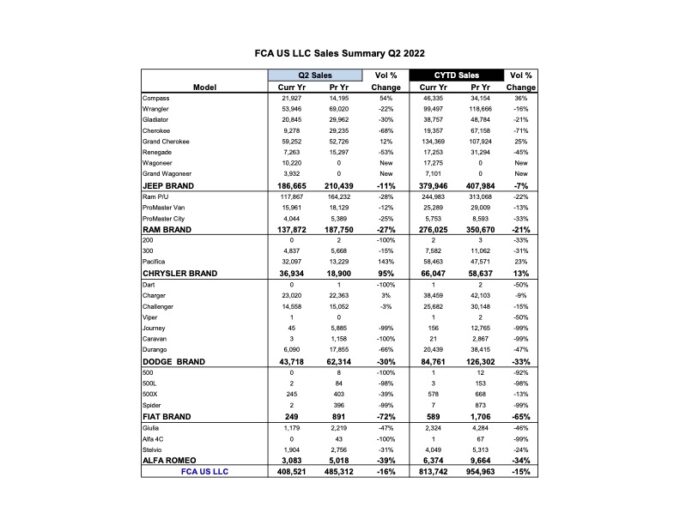