ethics3 rockcrawling8
So you just bought a Jeep are are itching to test it off-road. Before you chunk that thing into four wheel drive, there are...

So you just bought a Jeep are are itching to test it off-road. Before you chunk that thing into four wheel drive, there are many things that you need to know in order to not only be successful on the trail, but to keep your vehicle and even yourself from being damaged.

While this article is catered to mainly beginners, veteran wheelers may also want to review it and re-visit some of the basics of rock crawling that many seem to forget.

Don’t think of this as a “tips” for off-roading article; a tip is something extra to help you out. These are more like commandments, they are the basic things that all off-roaders should know.

Yeah, I realize that title at first sounds dumb, but it is not. This is where nearly every new Jeep owner makes their first critical mistake, especially the younger ones. You are driving down the road and see a lot full of mud, or some dirt road or trail leading off into some woods, and think “Oh! I am going to drive down THAT!” 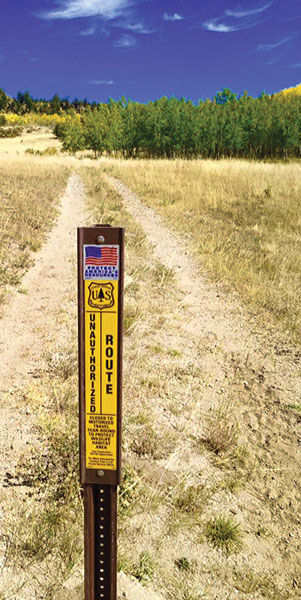 Only drive on authorized routes!

Whenever a land manager (like a Forest Ranger) finds tracks off designated routes and trails, they document it and use that information as ammo to close down even more areas for off roading.

Bottom-line: DO NOT WHEEL ILLEGALLY.  All public lands like National Forest have a “Motor Vehicle Use Map”. Make sure you get one of these maps an stick to the legal routes. You need to stay on the designated routes and trails, don’t just drive anywhere, especially on private property when you don’t have permission.

2. Know how to sit in your vehicle.

Rock crawling is much different that driving down the freeway doing 70 mph. You will find yourself leaning forward in the seat looking down directly in front of your vehicle to find the right line.

You will also need to lean your head out the driver’s side window to see your driver’s front tire on the rocks. Vision is key. Move your seat back up, and it can be very beneficial to move the seat higher if you can do that in your vehicle. You want to be sitting straight up and close to the steering wheel like you were taught in Driver’s Ed. 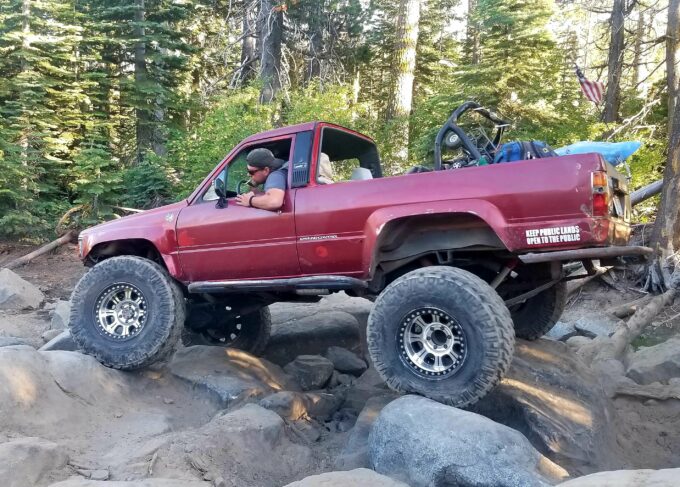 “Alaska Jay” is actually admiring himself in the side-view mirror here. But he looks like he is picking his line, so I used this picture anyway.

If your vehicle flops or rolls and your arm is outside the vehicle, you will sub-consciously stick your arm out in a vain attempt to stop the roll. I have seen that happen multiple times, and I have never seen that technique work. I have only seen broken arms.

Another common mistake is for passengers to grip the roll cage. NEVER do that, otherwise you or your passengers could lose a few fingers if you roll. 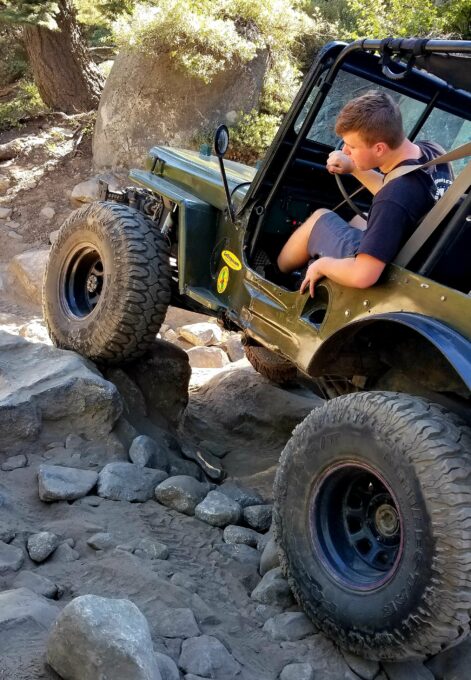 Put your tires ON the rocks, not around them.

Seat Belt Note: Believe it or not, many newer off-roaders tend to think, “Hey! We are only crawling at 3 mph, I don’t need my seat belt!” Nothing could be further from the truth. I once saw a guy roll his Jeep in camp just moving it five more feet away from the fire pit. He didn’t have doors on his rig, slid off the seat and then the Jeep landed on top of him. Wear your seat belt at all times.

This does not mean have someone in the passenger seat. It means having another vehicle with you while wheeling. You never know when you may need to be extracted with a tow strap. Make sure that other vehicles is just as capable as yours so they can keep up with your Jeep, and if they are not, only drive as far into the trail as they can get. Also make sure that you always have the proper recovery gear in case someone does get stuck or breaks down. 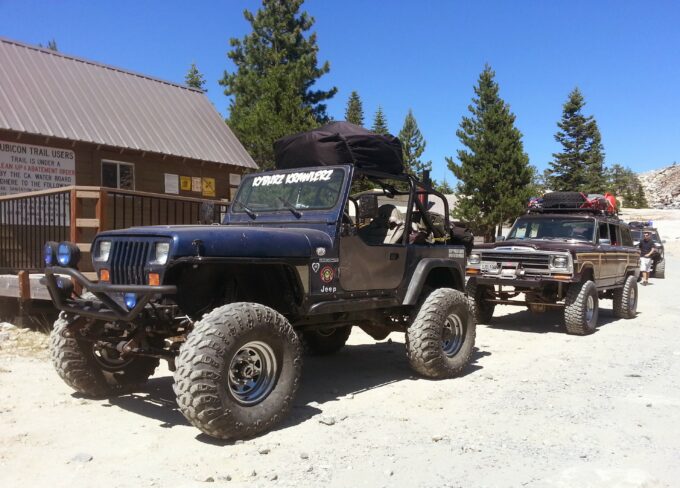 Thankfully this YJ had a much superior, totally reliable, Wagoneer following it.

Another critical part to wheeling on public lands, is to make sure someone back at home knows where you are going and when you are expected to return. Many trails on the west coast do not have cell service, so if you break down or get hurt and no one knows where you are, you could end up in a very bad situation. Many experienced trail-users have become ham radio operators to insure they always have communication on the trail. (More on ham radio use here.)

Airing down your tires so they have more grip on the rocks makes ALL the difference. I will not mention any names, but I know a certain Off Road Motorsports Hall of Famer that was having a hell of a time getting up a granite slab on the Rubicon one day. I walked over to his rig, just let a couple PSI out of his rear tires and after that he walked that rig right up that slab without a hiccup.

You would be surprised just how much better your Jeep will rock crawl with the tires aired down. 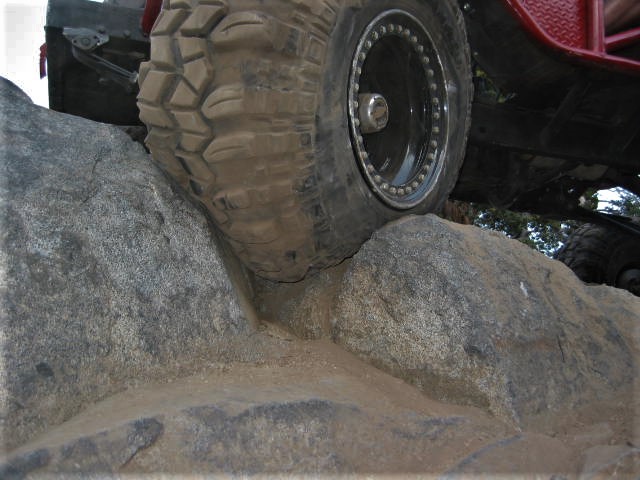 Airing down will give a better footprint on the rocks

I hesitate to tell you exactly how much to air down. A lot of that depends on your wheels and your tires. As a general guideline, the average Jeep with normal wheels and tires should be aired down somewhere around 15 to 20 PSI for rock crawling. You need to be careful however, if you air down too much, you can bust a bead and let ALL the air out of your tire.

5. Go As slow as possible, as fast as necessary

Now you are ready to start heading down the trail. Shift your Jeep into four low, disconnect the front sway bar, turn on your rear locker, and let her crawl. That is the key word: crawl. It’s called rock crawling for a reason.

If you have never driven a vehicle in four low before, the throttle will take some getting used to. It is going to be way more responsive and your vehicle will have much more torque, so go easy on it. 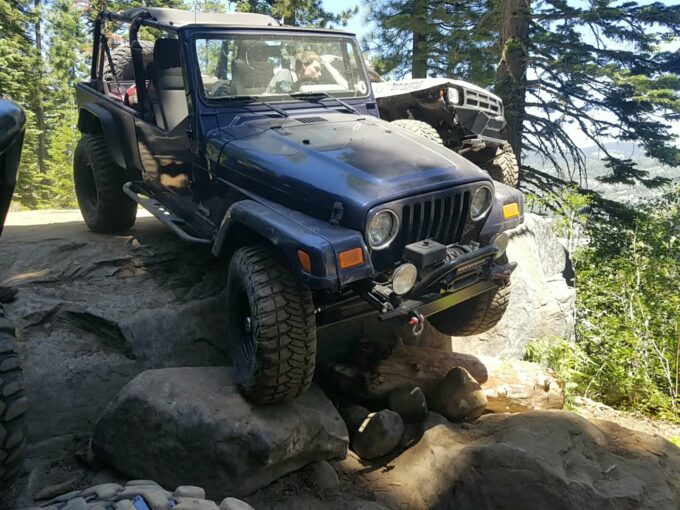 Always remember this mantra: As slow as possible and only as fast as necessary. Be patient. If your Jeep will not make it over an obstacle, engage the front locker and try again. If that does not work: back up, take a different line, and try it again. But CRAWL it.

You have to remember that your Jeep is not an Ultra4 car racing the King of the Hammers, or a rock bouncer built with a bullet-proof driveline and axles. Pounding the gas pedal will only get you in trouble and will lead to broken parts. Doing that over an obstacle in a stock to moderately built Jeep is the most common rookie mistake seen on the trail and it is the number one reason for broken parts.

If your Jeep starts hopping or bouncing up and down while trying to make it over an obstacle, you are using to much gas, have entered the danger zone, and could very well break an axle shaft. Patience is key, especially if you do not want broken parts and body damage.

To the uninitiated, just crawling the trail at two to three miles and hour may sound boring at first, but there are few things in life most satisfying than the feeling of having your Jeep chunk slowly over an obstacle that seemed impossible. You would be very surprised at what your rig can do and what it can crawl over using the proper method.

6. Use a spotter and pick the right line. 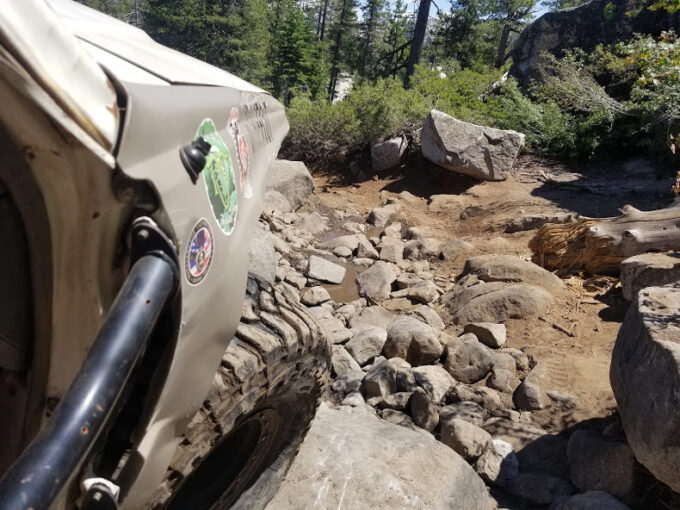 Look ahead with your eyes and pick your future line.

Rock crawling is ALL about tire placement. One year on the Rubicon, I watched a guy in a fully built JK on 37 inch tires attempt an obstacle over, and over and over again. When traffic on the trail caught up to him at the obstacle, he did the right thing and pulled over to the side of the trail to let them pass.

The vehicle right behind him was an near-stock, old flat fender Willys on 33 inch tires driven by an old guy. That $80,000+ JK owner watched on in disbelief as that old guy in a $4,000 Willys with open differentials (meaning no lockers) crawled right up that obstacle like it was nothing. 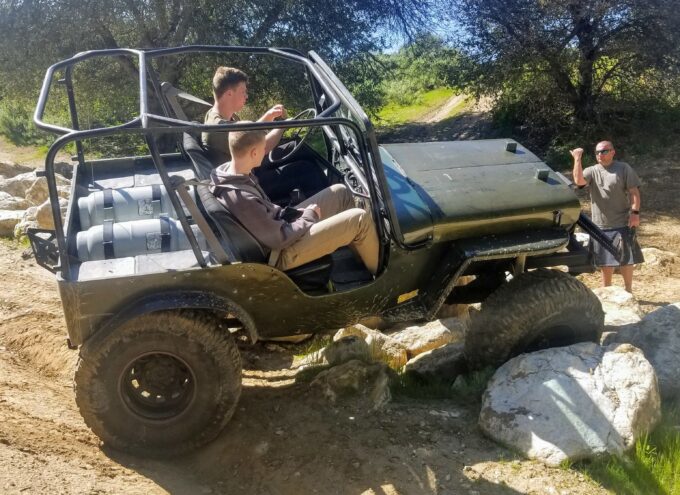 The kilted man says turn driver. Or he is pointing to the BBQ grill where the propane will be delivered.

So how do you pick the right line? Put your tires ON the rocks, don’t go around them. Most rookie wheelers try to avoid the bigger boulders on the trail. You want to do the exact opposite. By putting your tires up on those rocks, it raises your axle and gives you more clearance under the vehicle.

Know where your pumpkins (differential housings) are on your axles so they do not get hung up on rocks. 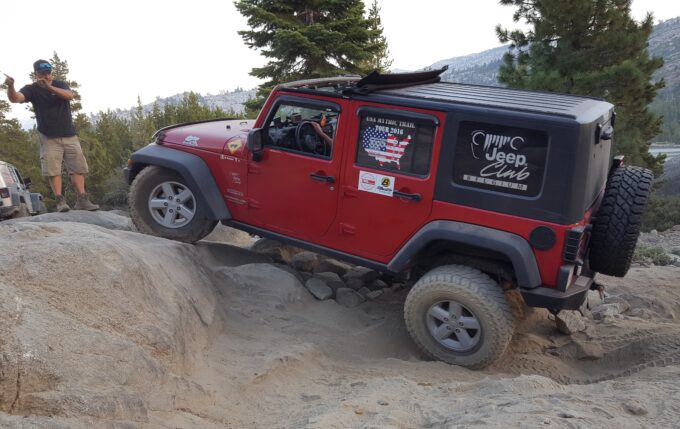 You can only see so much from the driver’s seat, so having a spotter that knows what they are doing out in front of your vehicle is very beneficial. Instead of saying turn “right” or “left”, spotters should say “passenger” or “driver” to avoid confusion.  (even the most level-headed spotter will sometimes forget the driver’s perspective and say “right” when they mean “left”) 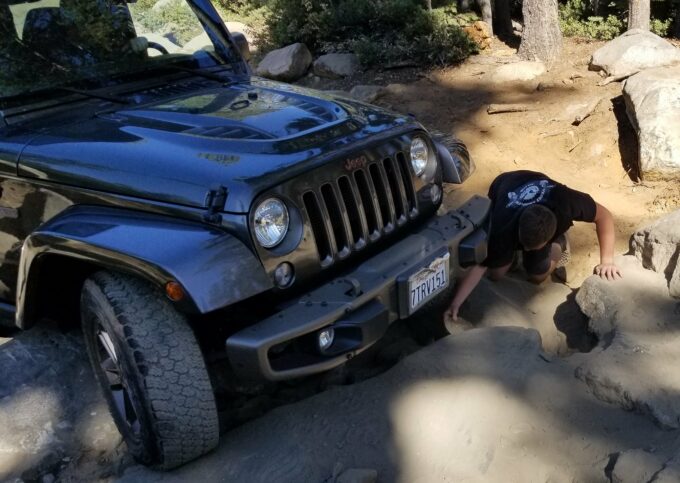 One of the greatest (albeit expensive) upgrades you can add, is a 17 year old rock-stacker.

A spotter can also stack rocks if need be for you to get over an obstacle. Just make sure you stay on the brake or are in park when they are doing so, and ALWAYS un-stack the rocks when you have cleared that obstacle. It is very bad form pave the trail for the next guy.

7. Understand that is it NOT just about wheeling

If you just wheel for wheeling’s sake, you are missing out on a huge part of our off-roading culture. If rock crawling was just about rock crawling, we would just be doing it on rock piles in someone’s backyard. There is a REASON most of it is done on high mountain trails or out in the woods. 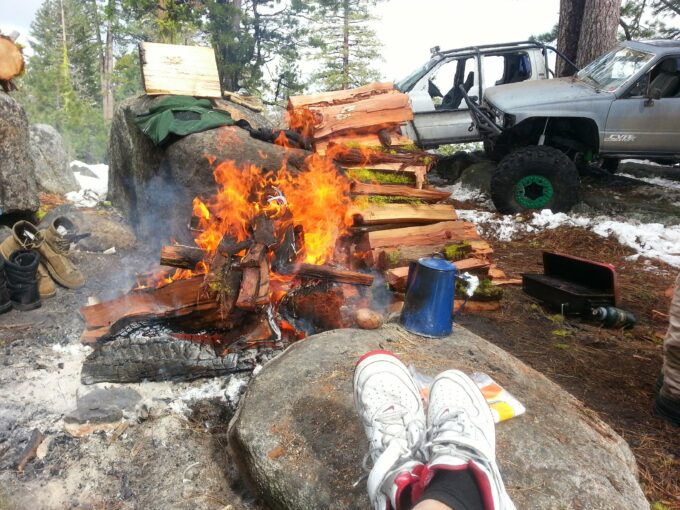 All types of wheeling, not just rock crawling, is MUCH more than just driving your vehicle over obstacles. It is about exploring. It is about getting out into nature. It is about seeing places that most people do not get to see. 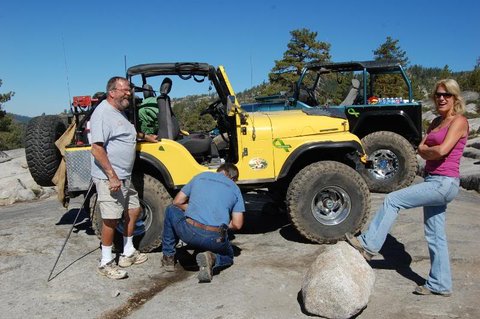 A broken down rig can also bring smiles and memories that last a lifetime.

Some of the best times that I have ever had on the trail is actually when someone has broken down. Everyone gathers around that person’s disabled rig, working together to figure out the issue and solve it. Generally that also involves, giving the owner a hard time, and a bunch of laughs.

Now that you have learned the basics; load up your rig with a cooler, camping gear and recovery stuff, and hit the trail!