[pics] Utah’s “The Maze” and Orange Cliffs by Jeep

canyonlands1 utah4
We appreciate this Special to ModernJeeper by Pete Kaufman The Editors The Maze district of Canyonlands National Park is in South East Utah. The...

We appreciate this Special to ModernJeeper by Pete Kaufman

I had not visited the Maze before and it had been on my bucket list, so earlier in the year, some friends and I decided to plan a trip.  We got together to check our schedules and reserved campsites for six days, three nights in Dollhouse 3 and three nights at the Wall.  There is a limit of three nights in a campsite and there are not many sites so early reservations are required.

So, Sunday May 26 we took off early with three vehicles and six people total for our drive into the Maze.

My friend Dave is a member of NABS, (National Arches and Bridges Society) and had information on how to located many of the arches that we wanted to visit.

An aside, since there are no facilities or water at the campsites, we brought ten gallons of water per person and well as all of the food, extra gas and supplies we might need for a week in the wilderness.  Also, we had to pack out all of our trash and poop.  Luckily there were no worries about bears getting the food.

We left our homes in Moab about 8:00 AM and drove the pavement to Hanksville where we topped off on fuel.  We then drove to Hite and topped off for the final time.

Shortly thereafter we started down the unpaved road to the Maze.  This road was fairly good except with some muddy spots from recent rains and some minor rough spots.  After we got further in the road got rougher and there were about half a dozen serious obstacles that we needed low range four-wheel drive to get through.  My 2013 Unlimited Rubicon loaded with Metalcloak goodies had no trouble where as our other vehicles didn’t have as much articulation and had an occasion to have wheels in the air limiting traction. 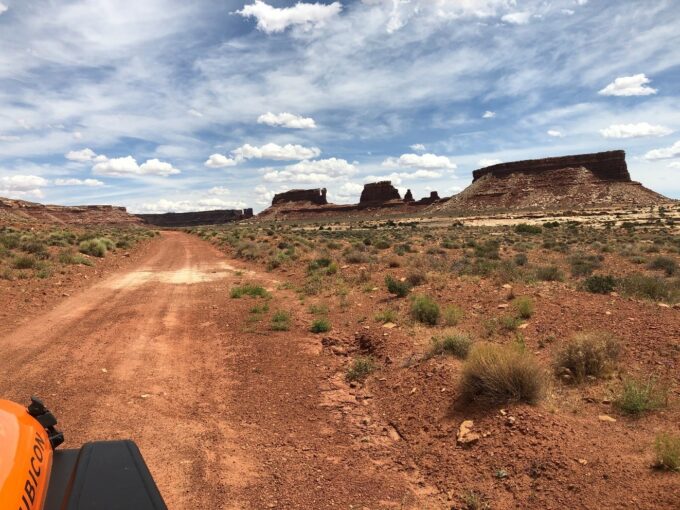 Enjoying the drive in to The Maze.

The last leg from the Wall to Dollhouse 3 was about 6 miles and took about an hour.  All told we arrived at camp at 6:00 PM for about ten hours on the road.

We set up camp quickly and heated up a delicious dinner prepared previously as the end of light was approaching and we were tired from the long drive in. 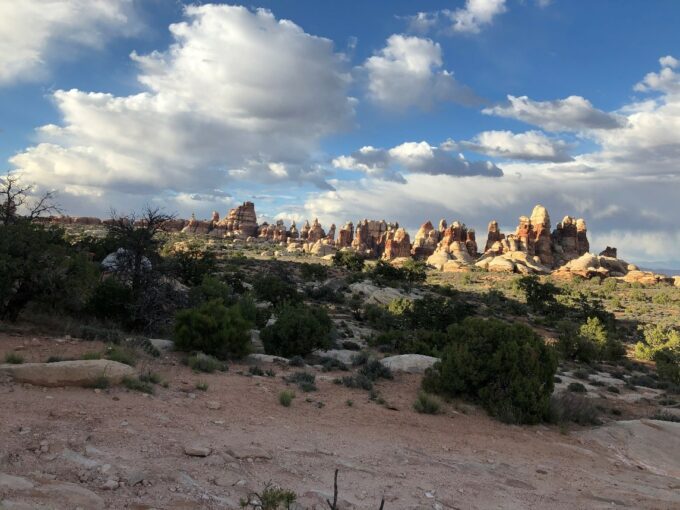 Picturesque view of the Dollhouse from our camp site.

Since we had two people per vehicle, I let my passenger drive the non-technical sections and we rotated people between vehicles, so many got to drive my Jeep.  Our first full day, Monday, we did a series of short hikes first to a rock art panel and the subsequent hikes to some unique arches and an ancient granary.  We did get some rain and wind heading back from the last hike, and I hung out in the Jeep until the rain stopped 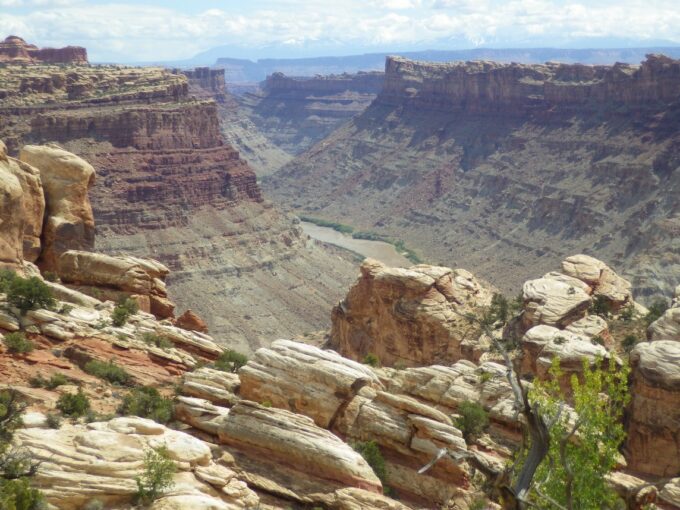 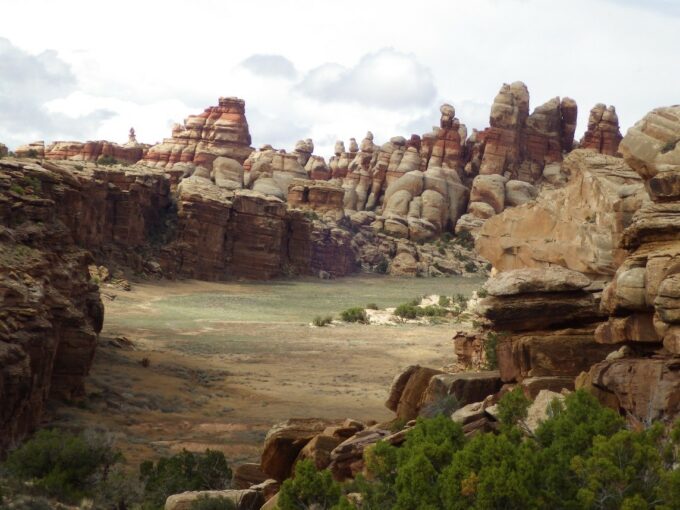 Tuesday, we did a long hike from the Dollhouse past Beehive arch, to a side canyon to look for a number of other arches.  Some of the arches were quite large and very photogenic.  On the way back Dave and I went further on, on another trail to visit another very scenic arch while the rest of the group headed back to camp.  We found one other larger arch on the way back but it wasn’t particularly noteworthy. 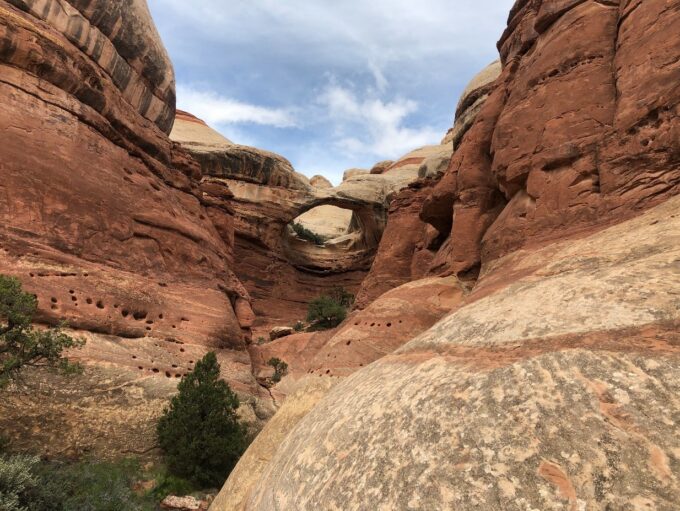 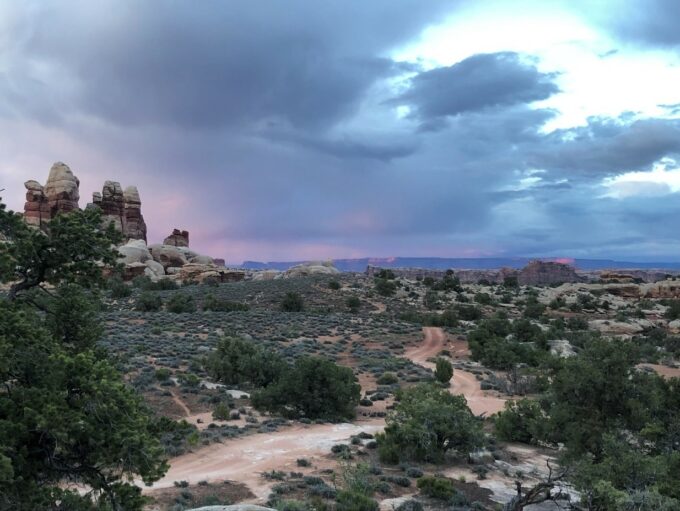 The end of the day at camp 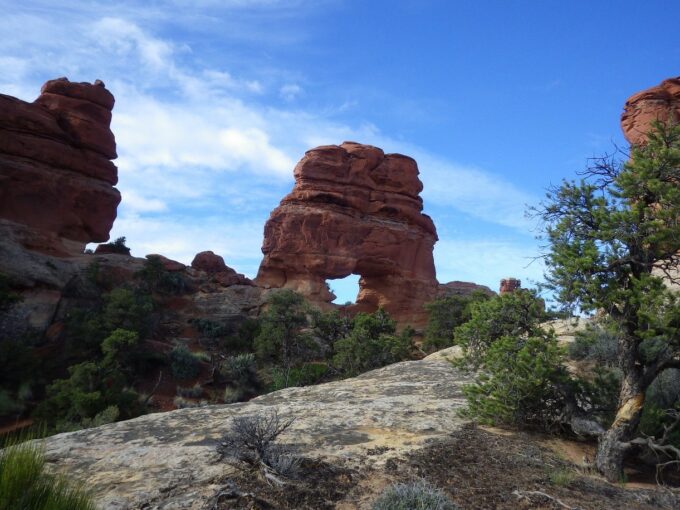 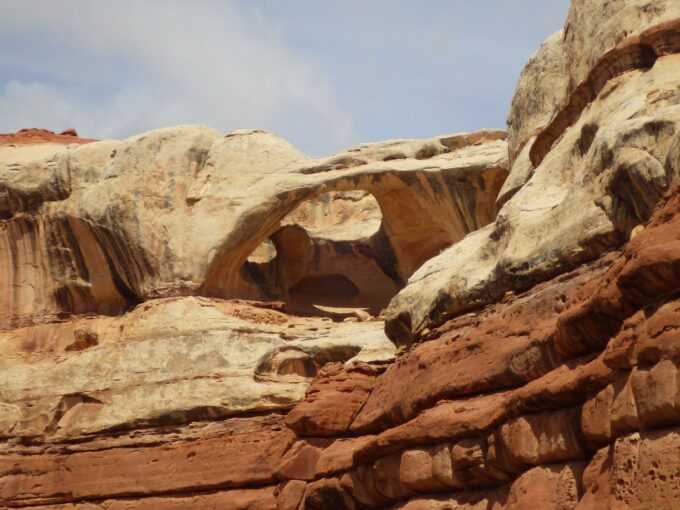 You can find plenty of Arches 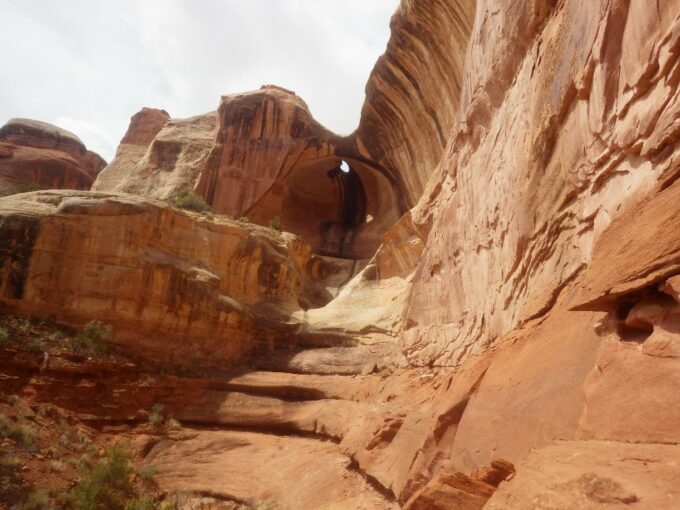 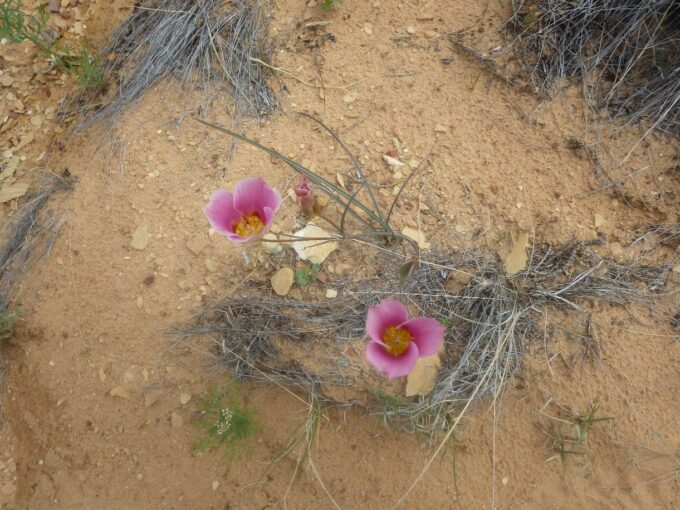 Wednesday, we packed up camp at the Dollhouse and drove to our next campsite, “The Wall”.  This was a wide-open space with tremendous views in all directions.  After we set up our tents, we took a short drive to do some more hiking to view some more arches.  We did find some and were able to get right up to one, but another we could only see from a distance.  There was just no way without technical gear to get there and get back. 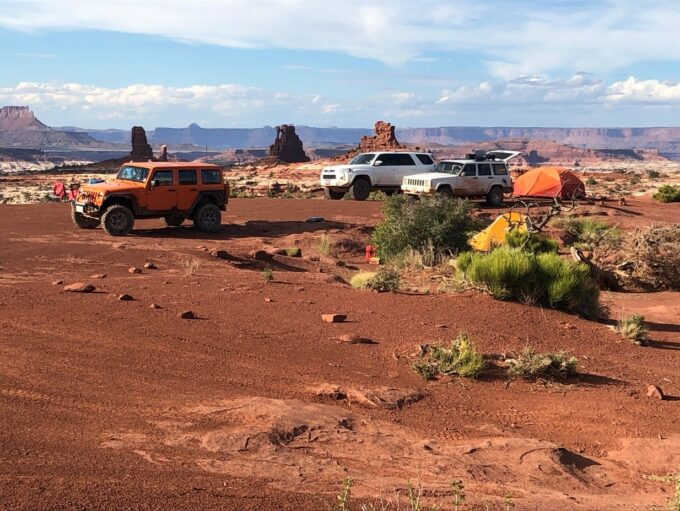 Camp at “The Wall” 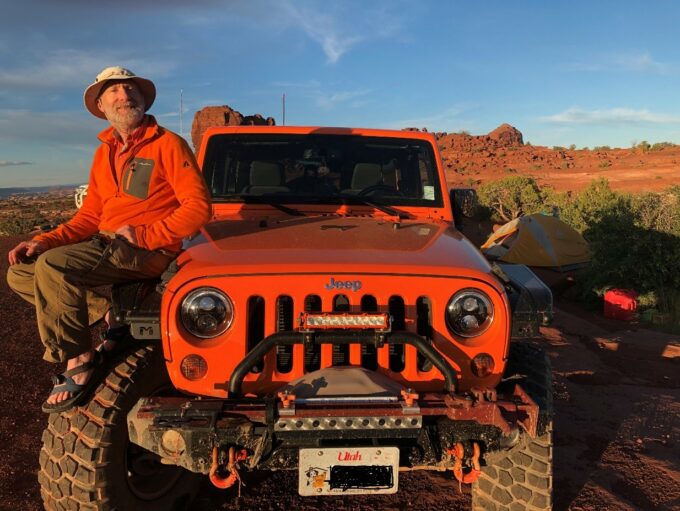 The author and his Jeep 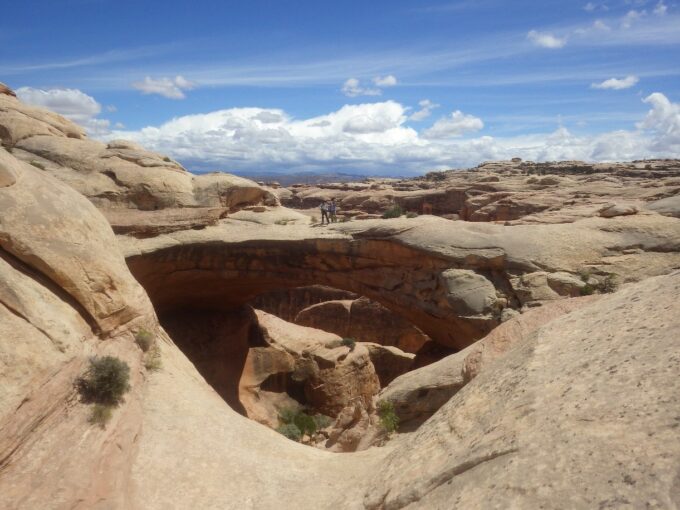 Large arch with hikers for scale

Thursday, we did another long hike starting from Chimney Rock.  We descended down into a canyon by an improbably route that switch backed down the various layers of the canyon until we reached the floor.  We saw some very nice rock art panels, including the “harvest panel”.  Naturally we saw some unique arches including Abbey’s triple arch.  Once again Dave and I split off to see a couple more arches while the rest of the group headed back. 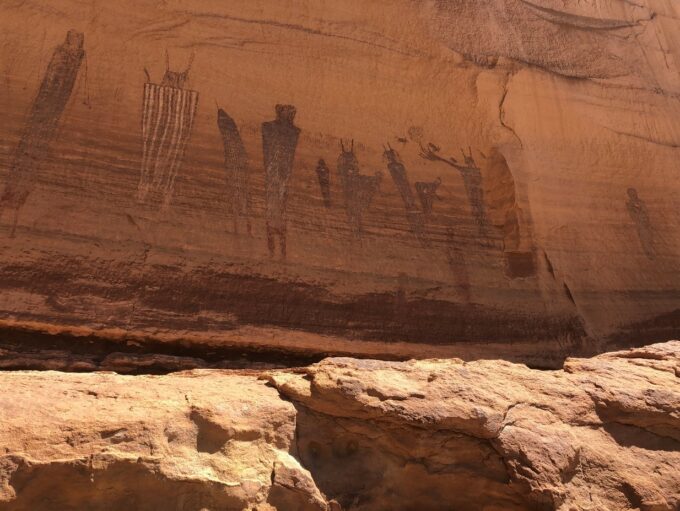 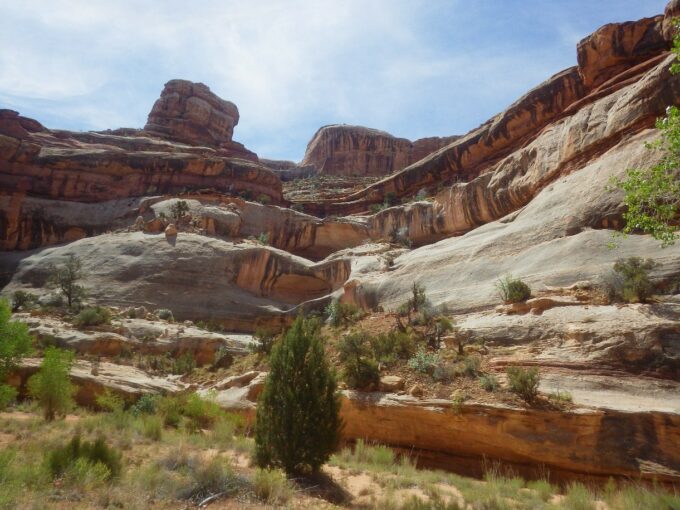 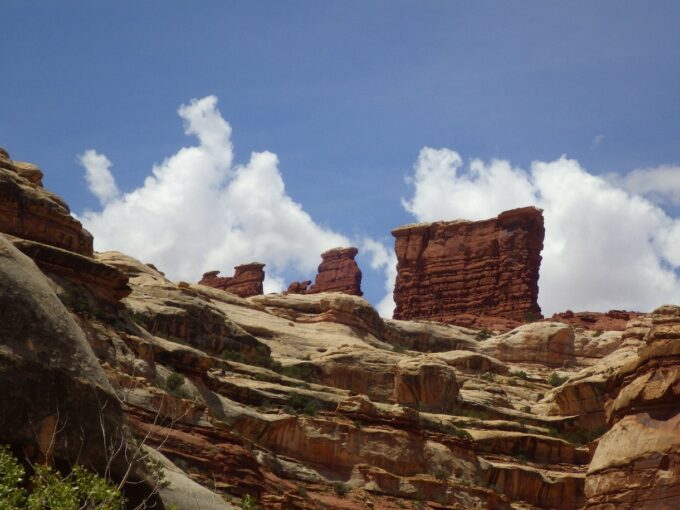 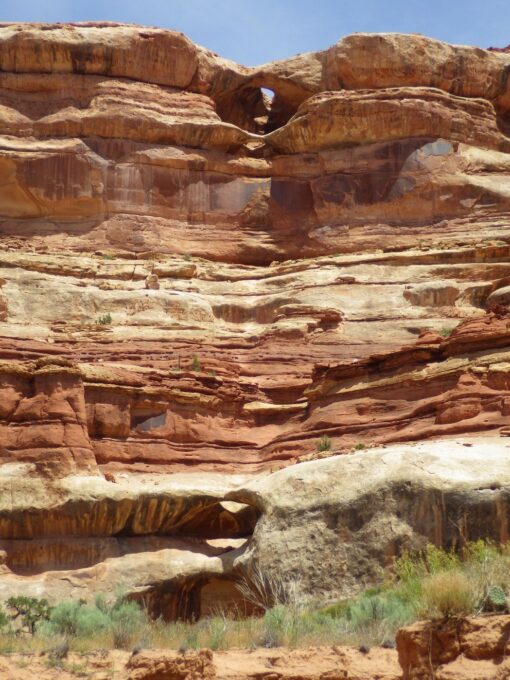 Friday, our last full day we did two shorter hikes, one from Standing rock and another from the area around Lizard rock.  Again, we saw many arches and interesting rock formations as well as more wild flowers than have been seen in many years. (the wet winter and spring really made the flowers bloom this year) Tibbett arch was a very large arch that you could see from the road, but once again we couldn’t get as close as we would have liked. 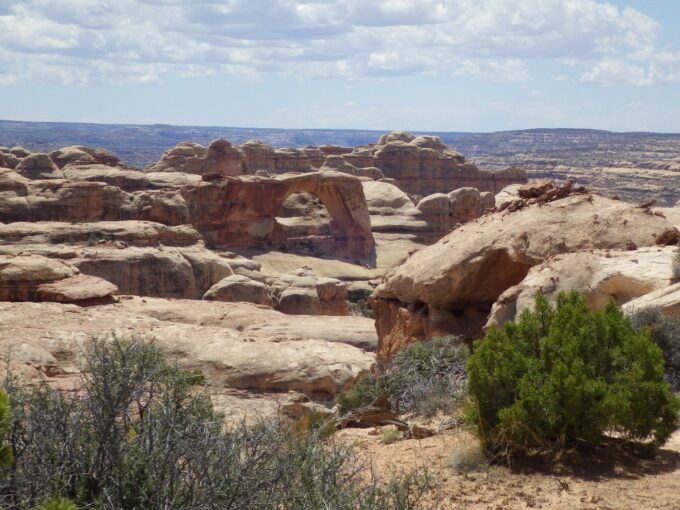 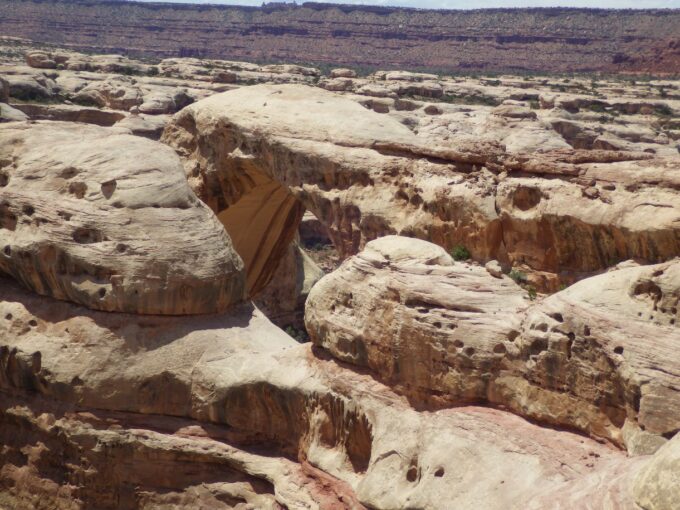 Saturday, packing up camp in the morning for the long drive back to Moab, was bittersweet.  It was sad to be leaving the Maze, but the thought of a hot shower and the other amenities of home were something to look forward to.  We stopped at Clearwater canyon on the drive out to see another rock art panel which was pretty spectacular.  It was nice that after the difficult sections of the drive that we swapped passengers and they got to drive my Jeep on the “improved” dirt road.  It gave me a rest and we got back to the pavement and went back via Blanding.  We also stopped in Monticello for dinner and since I was going to be a passenger again, I had a nice cold beer with dinner.  After dropping off the group and their gear back in Moab, I got home and had a nice long shower, well needed after six nights without one.  I didn’t think about unpacking the Jeep until the next day. 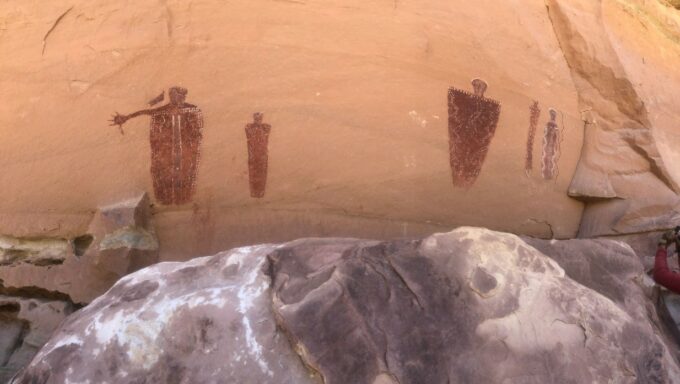 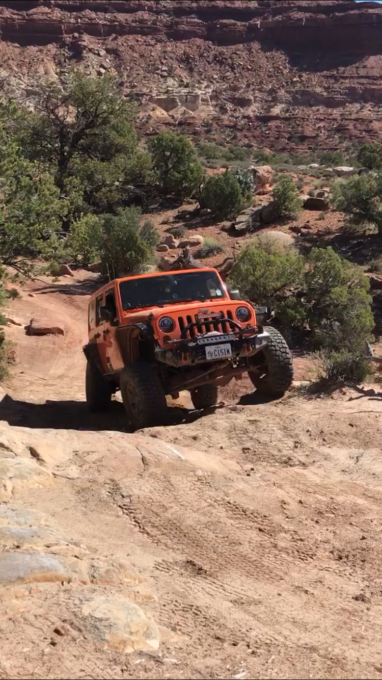