[pics] The Race is On! Some Jeeps of Ultra4 and the Nationals

racing9 Ultra49
Lona Scott of Scott’s Designs, action photographer and designer continues her special report to ModernJeeper of Ultra4 racing, this time focusing on some of...

Lona Scott of Scott’s Designs, action photographer and designer continues her special report to ModernJeeper of Ultra4 racing, this time focusing on some of the Jeeps — something all ModernJeepers love to see!

Photos and Story by Lona Scott of Scott’s Designs

Jeep is very popular in the Stock 4600 class and the modified Stock 4500 class…As a matter of fact, Jeep is the majority of what you will see out there. The following is a little about some of these Jeeps and their drivers. 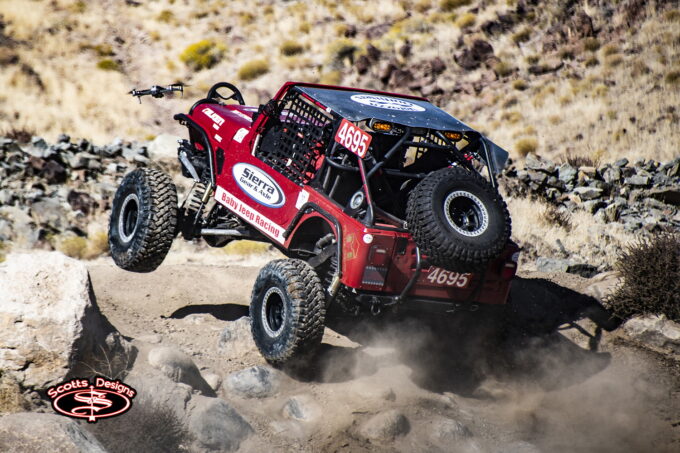 Dawson bought the now “red jeep” from VP Racing, Ben Varozza & Jacob Pacheco in 2017. He raced his first race KOH 2018, from there he raced the Ultra4 West Series 2018, finishing with National Championship 2018. Dawson has dreamed of racing Ultra4 & King of the Hammer since he bought his first TJ in 2011. It was exciting to see his dream coming true. The day before he was to leave for KOH 2018 is when he found out that he had a brain tumor.

Dawson chose to race 2018 anyway. He was finally going to race at Hammers and nothing was going to stand in his way not even a brain tumor. Dawson had to have intensive physical therapy, he had no use of his left side of his body, he had to re-train his brain to bring back muscle memory. Everything was a struggle, walking, eating, sitting, talking, even his eyesight was affected. Racing is Dawson’s happy place and has helped him heal. Dawson is now cancer free and stood on the podium with first place at Ultra4 Nationals. His passion to chase his dream of racing no matter what, and not let anything get in his way. Dawson is a true inspiration. 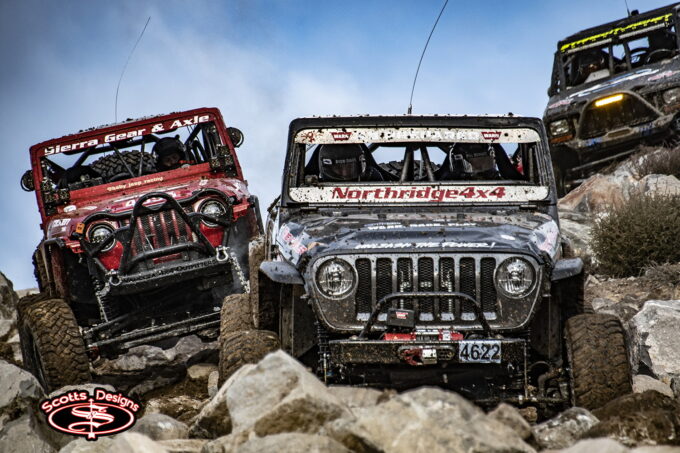 Bill bought his JL in October 2018 with 27 miles on it. Bill bought it with one thing in mind, to race in the Ultra4 Stock 4600 Series. With full support from Currie Enterprises, Bill built the Currie Enterprises RockJock JL to compete in the 2019 KOH and more. This is the first Jeep JL to be used in any type of professional motorsports. “The support was overwhelming and it enabled me to put a very competitive race car on the track with the best parts available.” The year with a new car was not without any new car blues. They fought electrical gremlins along with other issues. The year started at KOH with an unfinished car, working on it day and night for 3 days and finally getting it through tech at 2am on race day. No testing or tuning, they took this brand new Jeep to the starting line for the toughest 1 day Off-road race in the world- King of the Hammers. Although fast, the car was not dialed and they got beat up pretty bad in the desert. In the rocks, it shined and they were able to make up lost time. At mile marker 112, they came upon a competitor who had rolled and was visibly shaken. They made the call to tend to this racer until the recovery team could get to them. This decision caused Bill to time out but they gained a friend for life. Next race was Stampede where they rolled in practice and hurt the car pretty good. The next 2 races were in the new North Series of Ultra4 in Montana where they took 1st in one and 2nd in the other. The car was starting to come around and shined strong with 3rd place on the brutal Ultra4 Nationals track at Wild West Motorsports Park in Sparks Nevada.

It currently has 834 miles on it. They don’t call him crazy bill for nothing! 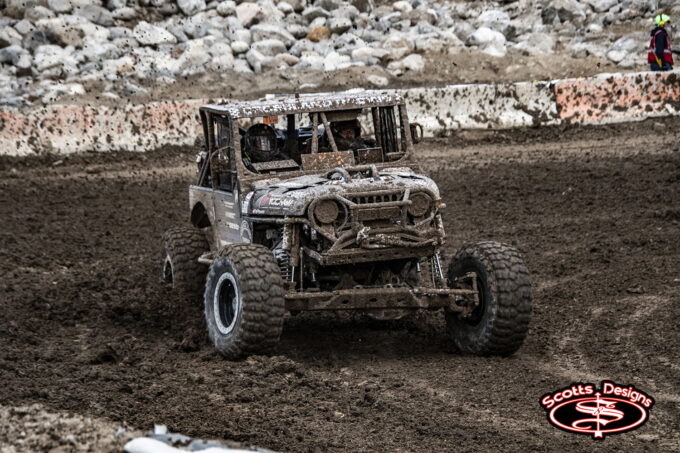 4583 still has factory frame rails, factory firewall location, cowl, hood and originally started as a carburated big block. Chuck recently updated electronics, switched to a fuel injected LS with 62mm twin turbos. With a conservative tune the car is making 750 hp with only 8 lbs of boost compared to the 589hp the YJ was making before the upgrade.

Chuck replaced the Dana 60 front with a 4” Spidertrax housing. It is also the heaviest car in it’s class at around 6k lbs. 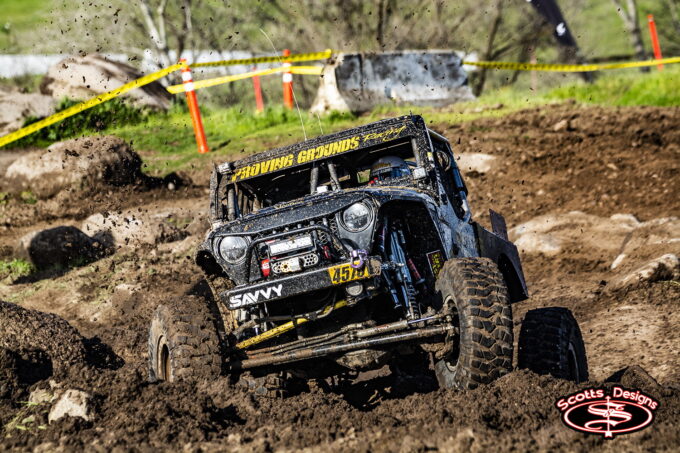 “I have wanted to drive jeeps since I was a child. My first, second, third and 4th car were jeeps growing up. Building my first real rock krawler while in college was my path into the off-road realm of products and manufactures.” said John. After John graduating college, he landed a job working as an engineer for Poison Spyder Customs in Southern California.

With a wild hair John put his built TJ up for sale and bought the #4570 from Rock Krawler suspension. Completely gutting it from their build to where it is today after a nasty end over end crash, the RaceLJ has had a roller coaster of victories and trials of tribulations. Fully replacing the chassis to a modern race car and tubed hack half chassis, the RaceLJ became a competitive car in the 4500 class. Gutting the cab and rewiring the car made more room in the cab for better equipped PRP seats and comfort for long desert races.

After 5 years of working at PSC, he pushed his career to new heights working for Daystar Products as the Engineering Manager for the facility. Mark Turner, Daystar’s CEO is a racer himself and has helped be a large contributor to his success the past few seasons. John has led the Engineering department for 2 years at Daystar and with SEMA awards under his belt for new product development. Racing a “jeep” style car pushes the envelope for what production vehicles are capable of. 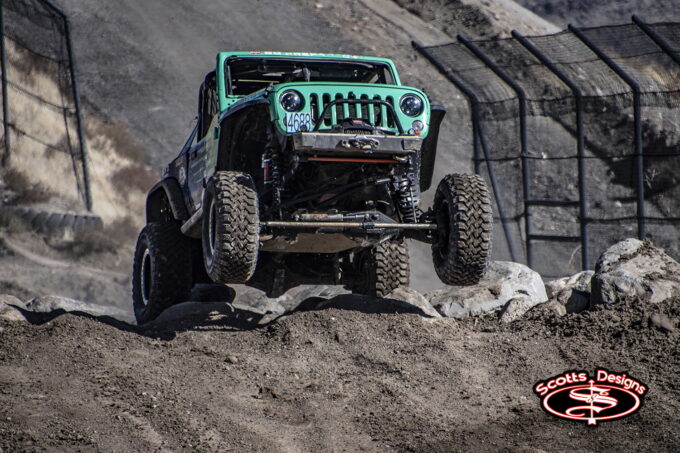 2019 has been Jon’s first year to race Ultra4. He owns an offroad shop in Alabama that specializes in Jeep JKs. They build and install GM LS V8 conversion kits for them. Growing up in Ohio, Jon raced snowmobiles, modifying everything he could get his hands on.

Once he moved to the South, he had to give up the snowmobiles and dove head first into Jeeps. His first KOH experience was in 2017 helping Savvy offroad tune and repair their cars. After a few years helping Savvy in the pits, he was offered a chance to purchase one of their 4600 cars and ha hasn’t looked back since. KOH 2019 was his first time in the JK and the first time racing KOH. “I was on pace to win, had 45 minute lead toward the end of the race and had a mechanical issue. We pushed it as far as we could, unfortunately we were never able to cross the finish line. From that point on, I vowed to finish every race and go for the national championship.” said Jon.

The 4688 started out life as a 2015 Jeep wrangler. At one point in its life it was wrecked and totaled. Savvy Off-road purchased it and built it into the race car you see today.

She still runs the stock 3.6 engine, automatic transmission and transfer case, it even still has the catalytic converters.

Jon said that “Overall this is a very well built 4600 car and has served me well for my first year racing and I expect it to keep finding the podium for years to come.” 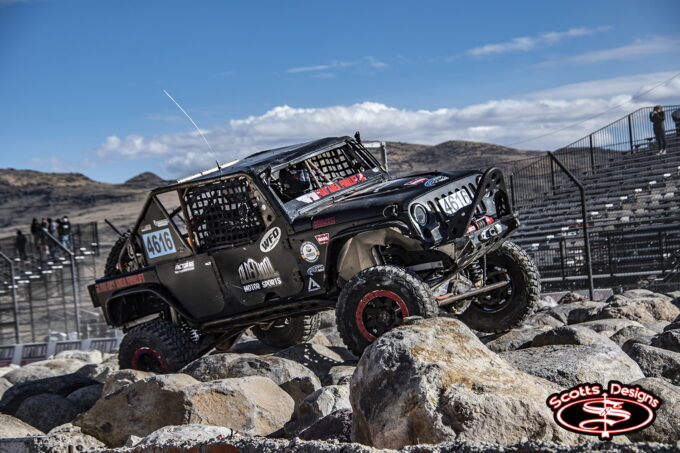 Nathan’s jeep originally started with the owner of Smittybuilt wanting to build a jeep for their new sponsored event the every man’s challenge. He used his personal jeep and built it into the very first 4600 EMC Smitty built jeep. It was then taken over by 4WP and built into the four wheel parts 4600 Jeep. They went through it with the help from Wayne from Fox, giving it a signature look it has now.

It then became the Pro-comp Jeep being featured on banners, flags and around events sponsored by four wheel parts, Smittybuilt, or Pro-comp. Kevin Adler decided it was time to upgrade his car to a 4800 and sold Nathan the Jeep at the Fallon 250 in 2016.

The Jeep started out as a 2007 four-door Wrangler. It was the first year they produced the longer four-door chassis. Unfortunately in 2007 it only came with the Legendary 3.8L V6 powerhouse of a motor. Nathan says this is the weakest link on this jeep build.

The vehicle itself has been built with 14 inch king shocks, Dana 60 front and rear with Currie rock jock shafts, ARB lockers, and a Safecraft fire suppression system. This Jeep is both solid and safe.

This also makes it quite a heavy vehicle, giving us a disadvantage in a lot of the short course racing due to a lack of weight to horsepower, but at the same time making it a strong contender in the endurance racing that the Ultra4 series is known for. He has taken third place in the West Coast series his first year and numerous smaller trophies from Ultra4 and Norcal rock racing. Nathan says “The biggest question now is to either keep plugging along in the car we are in now or upgrade to a newer faster vehicle that can compete in the constantly evolving 4600 race series.” 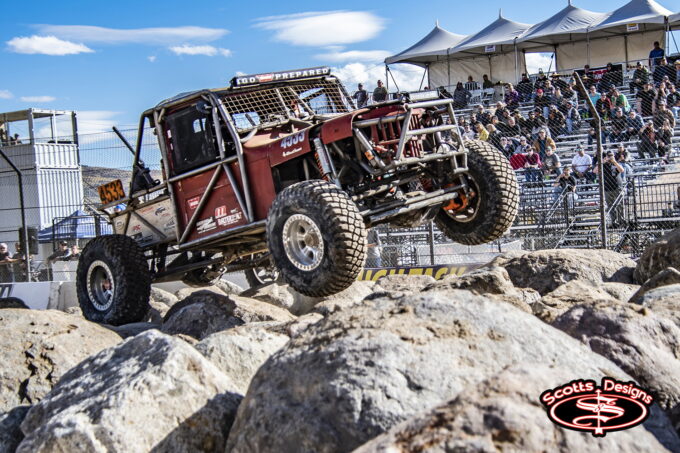 Jesse Balter in his classic 1953 Willy’s pickup truck. Jesse wanted to build an Ultra4 4500 car and wasn’t sure what to use. He said “I had never raced before and didn’t know if I would good at it or even enjoy it so i needed something that could possibly be a trail rig of racing didn’t work out. Also if it was going to be a trail rig it would likely be on the street on occasion. Therefore I needed something smog exempt and had to be American made. This is what I needed up with.”

These are only a few of the many Jeeps that you will see in Ultra4 and I’m sure there are many more to come in this quickly growing sport!