[pics] “Everything Is Bigger in Texas” and Racing Is No Exception!

Texas-style racing came to King of the Hammers this year with a new race rig, #4659 “Manche”, in the 4600 class of the Every Man Challenge race! 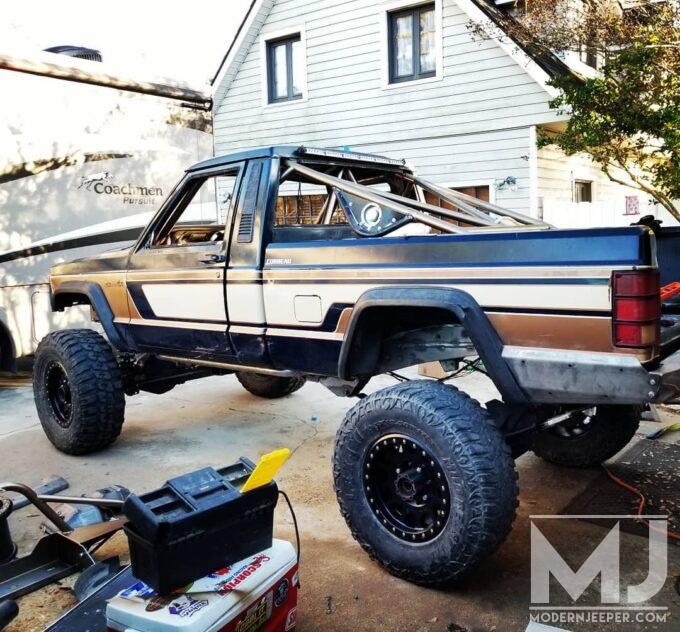 I met Donnie and Alexandra Kehlenbeck at my first Dirt Riot race in Katemcy, Texas at Wolf Caves Offroad park. As husband and wife they raced together in the UTV class of the Dirt Riot series. Racing and pre running with them was a blast and I got to know them as racers and now friends. I had the pleasure of watching them race with their new MJ race rig at KOH and have an interview with them on their  race journey. 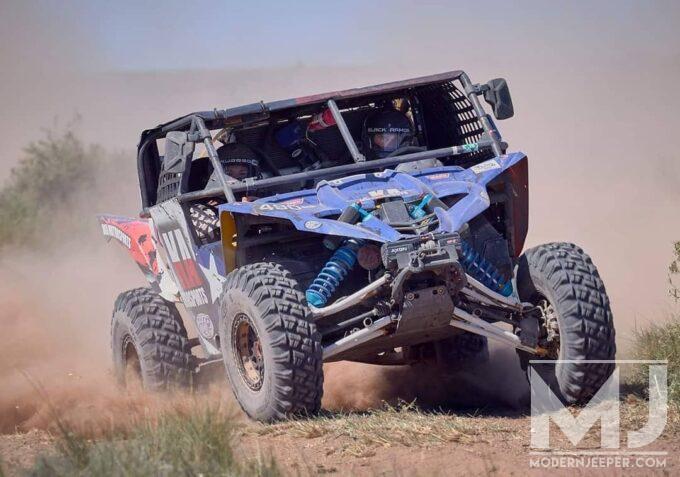 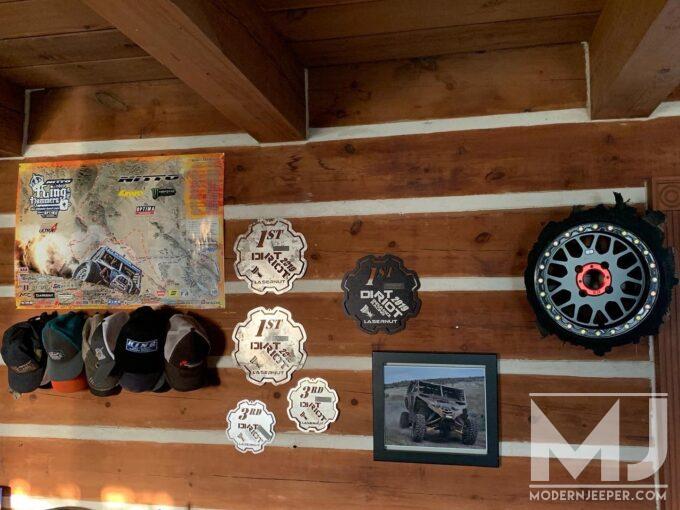 Donnie was born and raised in Texas and lives and works in Houston (Cypress area). He lost his hearing when he was only a year and a half old to Meningitis, and has had a Cochlear Implant from Cochlear Americas for the last 18 years or so. Thanks to technology, great parents and teachers, he was able to hear and talk very well to the point that most people do not realize the severity of his hearing disability – without his implant, he has over 98% hearing loss in both ears. They had a great season in 2019 racing their  UTV, and look forward to the 2020 Ultra4 race season where they plan on campaigning in both 4900 AND 4600 classes with their Jeep Comanche that they are building up from stock.

Donnie:   It started with drag racing and street racing. I did a little bit of dirt track…saw the evolution of KOH on Pirate 4×4 and always wanted to get into it but never had a chance until I got into the oil field in the last couple of years. In 2018, we bought a Yamaha YXZ and started racing in the TDRA, Dirt Diot, Ultra 4 and KOH. Lance co-drove with me at KOH 2019 and we made it to lap 64 where we broke in Cougar Buttes. Alex co-drive the rest of the races we did that year including Ultra 4 Crossbar race. Needless to say, we were hooked! 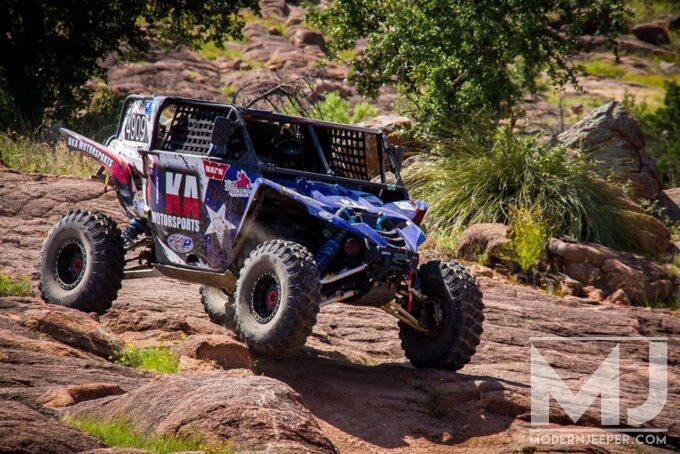 Donnie:  The answer to this question involves a few different components. It is not only the thrill and excitement we get from racing, it’s also the people we meet and the connections we make along the way. We are all very competitive people and in this sport, we not only compete against other racers, but we compete against ourselves and the car against the terrain. 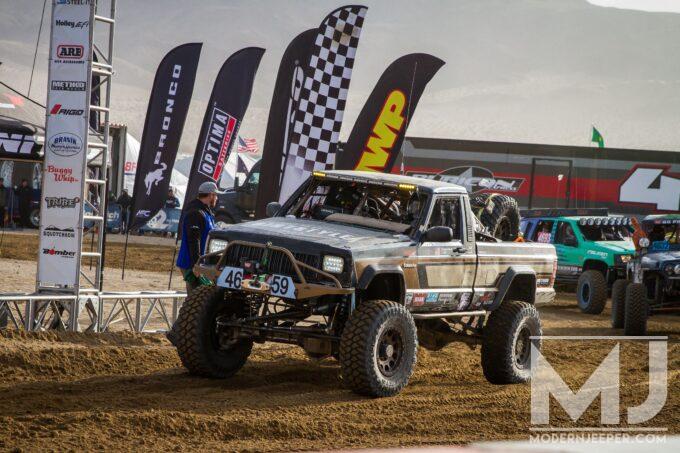 Jessy:   What does the future look like for you in racing?

Donnie:  For the 2020 season we are going to campaign the Comanche in the Ultra 4 east series and we are looking into getting Alex into a UTV to start racing. I would love to eventually get into a 4800 car in the next few years.  We are also working on increasing our social media presence and gaining more value with our marketing partners and people who help support us.

Jessy:    What impact do you want to leave for fans and future racers or the world in general?

Donnie:  We are determined to have a very open and positive presence with not only fans, but competitors as well. We want everyone to feel comfortable to ask questions, ask for help/tools, or just to come hang out with us. Through our DirtStyle brand, we hope to increase exposure to off road racing in TX and plan on having several events throughout the year to promote off road racing.

Jessy:   Who do you look up to in the racing world?

Donnie:  Michael Justo with NOE Racing, honestly. He is a small time, small budget guy but he knows what he is doing, had a great year in 4600 last year, always has a great attitude, and his team is people we look forward to pitting next to in Hammertown every year. 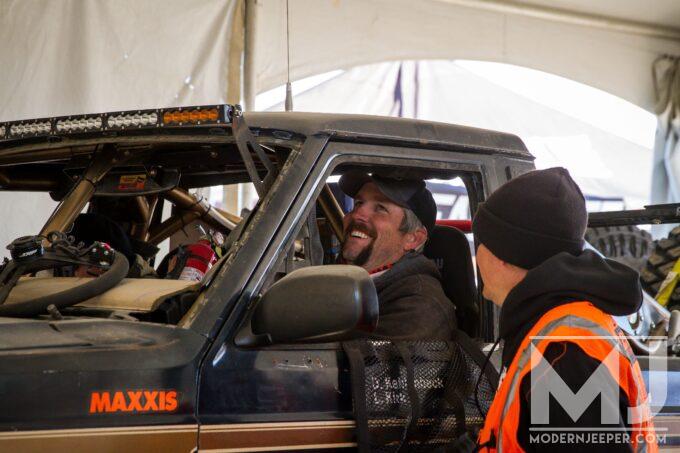 Jessy:   Do you train for racing?

Donnie:   We haven’t really had time between building race cars and working, but we hope to incorporate that into our schedule in the future as we become more refined. A lot of our preparation, outside of getting the car ready, involves researching the trails and different lines.

Jessy:    What is your setup as you roll into the pits? Trailer? Garage, that type of stuff?

Donnie:  We have upgraded substantially in this department since we have started. We purchased a motorhome for our living quarters, Lance got an enclosed race trailer with shower and bathroom in it to house his buggy and additional crew members, and this year, Allen towed our chase Jeep and the race truck on a gooseneck trailer. Allen handles the cooking and does a phenomenal job cooking all different types of meals for our team and neighbors.

Jessy:  Was there a sketchy situation you have ever been in that stuck out, or an accident: “do you ever take it off any sweet jumps?”

Donnie:  We had a pretty good wreck in nationals coming off a jump in the UTV, rolled it after breaking steering, and ended up tires to the sky. 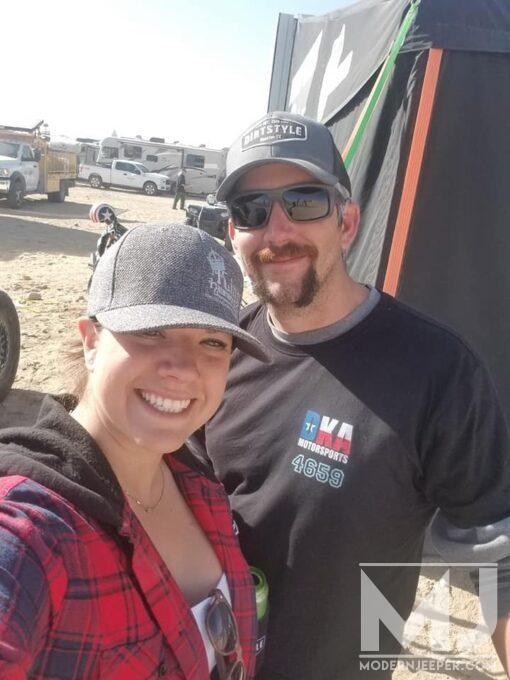 Jessy:  What is the typical “ritual” you have to prep for a race and before a race?

Donnie:  We go over the vehicle from front to back, checking all the torqued nuts and mark them with a paint pen. All the fluids get checked and the comms get checked, and then immediately before the race we make sure we go to the bathroom and make sure Donnie has a new Cochlear implant battery.

Jessy:   What do all the racers talk about before a race?

Donnie:  A lot of times we share information about different lines to take through the rocks, things they have tried, things we have tried.

Jessy:    Have you ever had to run to a pit in KOH race?And if you had what was the furthest and what did you break?

Donnie:  No, but we have walked back 6 miles to Hammer town after breaking because Lance was determined not to sit waiting for recovery for 7 hours like we did last year! We aren’t 100% sure what broke, we are fairly confident the crank position sensor let go as well as other motor issues that we haven’t tracked down yet, but the rest of the truck was fine and working well. 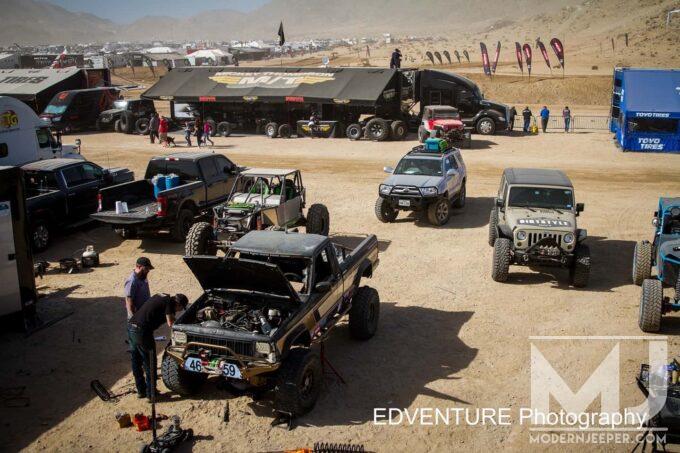 Jessy:  Do you ever “send it” or more like “hold on” moments?

Donnie: Yeah we have done both. Lance and I mostly run with the “send it” mantra, but he is good at also recognizing those moments when it is best to hold back a little to keep the car together. Sometimes, especially in the UTV we just have to launch it over something and hope for the best!

Jessy:  When you’re racing for 10 hours how do you prepare for that? Snacks? Drinking? Bathroom breaks?

Donnie: We carry water and beef jerky in the truck and we make sure we go to the bathroom before the race so we haven’t really had an issue with that. One time, after we broke, Alex had to find a bush to hide behind in the desert…it is quite a bit harder for a woman in a race suit to be discreet than a man.

Jessy:  How do you get mentally ready for a race? What music do you jam to? Do you pray?

Donnie:  We typically jam out to our favorite Texas country artists. We make sure to get a full night of sleep and try not to party too hard the night before. I don’t really feel completely locked in until I am putting my harness on and in the racecar. After that, I am completely focused.

Jessy:   What is the one thing no one knows about you?

Donnie:   Most people don’t recognize that I’m profoundly deaf, and have been since I was 15 months old.  I wear a cochlear implant and through a lot of training, support and technology I’m able to be 100% functional in the hearing world.

Jessy:  What goes through your mind at the starting line?

Alex:  as a co-driver I’m thinking about the racecourse, making sure the GPS is set right and mentally preparing myself for the first few turns.

Donnie: Honestly, I’m telling myself not to roll on the first corner.  In our first ever offroad race, we only made a couple of turns and then rolled the car. 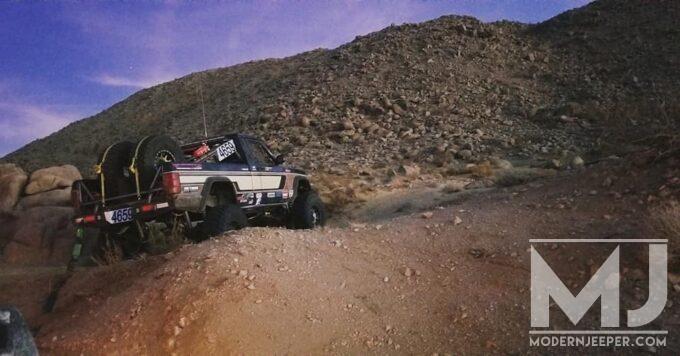 Jessy:  What are you going to do to win? What is your strategy?

Donnie: It really depends on the race.  In some races we know we need to push the car hard from the start to have a shot to win, other times it’s more important to keep everything together and see where you’re at midway or ¾ through the race and decide if we should turn the car up and go for a win.  I’ve been rock crawling now for 20 years so I feel confident in the rocks, and gaining experience and confidence in the go fast stuff every race.

Jessy: Physically how do you feel after the race and a day or two after?

Donnie: Usually if we’ve done well, the adrenaline is pumping and we feel great for a pretty good while.  The Yamaha was so smooth that we usually weren’t too beat up after a race unless we wrecked. The Comanche isn’t quite as smooth and we get bounced around some but it’s still not terrible.  We’re all in fairly good condition so we’re usually not sore for very long.

Jessy:  Do you even sleep or get sleep before the race?

Donnie :  One of my many talents is that it only takes me 5 seconds or less to fall asleep when my head hits the pillow.  Lance and Alex are also morning people so it’s not a big ordeal for us to get going in the AM. Allen is a little grumpy until he gets some coffee in him.

Thank you Donnie and Alex for talking with me and I hope to see more action from your racing careers!!

Make sure you follow them and check them out at DirtStyle racing!

Special Thanks to EdVenture Photography for some awesome pictures!! 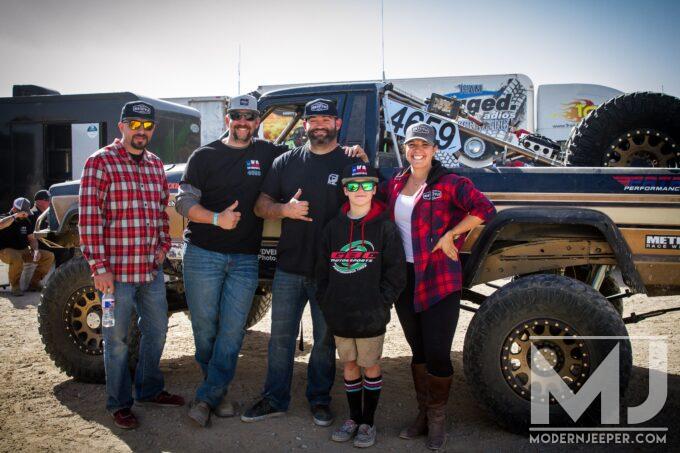 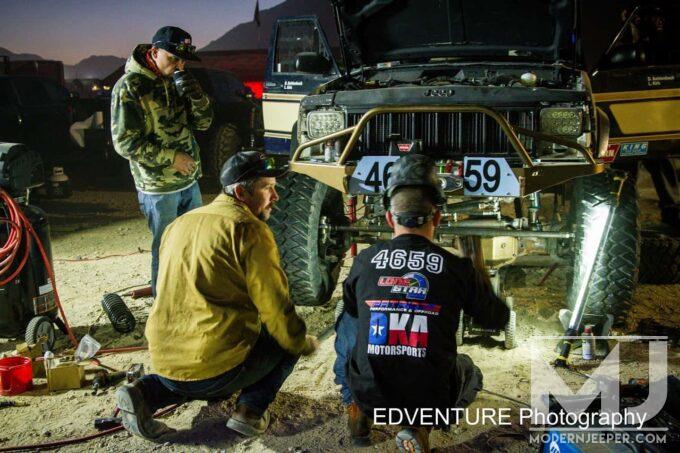 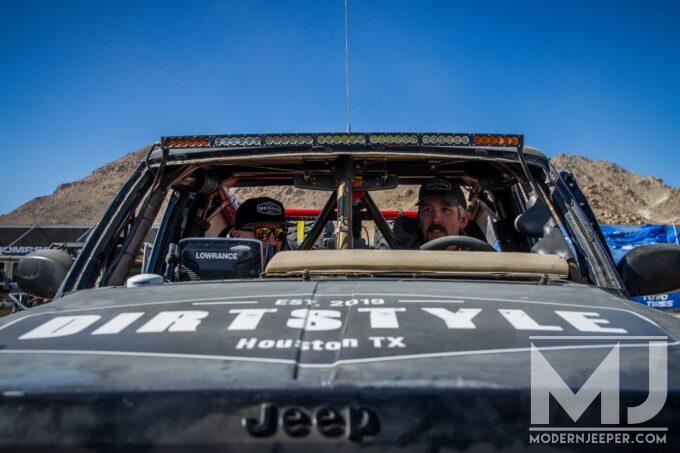 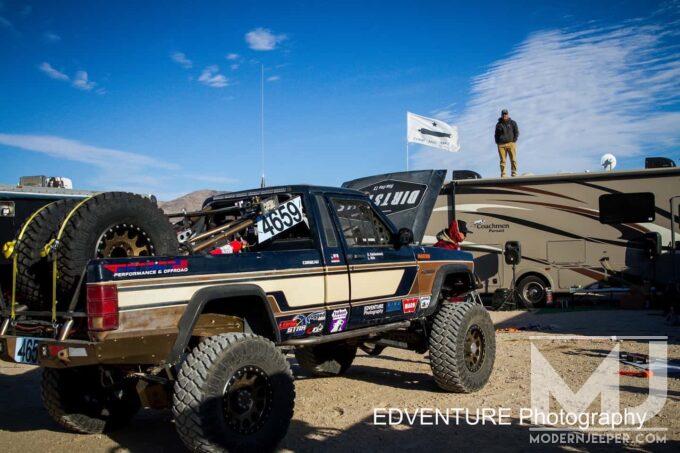