rubicon trail10
(Reprint of Chris Collard’s article from June 2004; Photos by Del Albright) FRIENDS OF THE RUBICON (FOTR) MAKE A DIFFERENCE IN THE HISTORY OF...

The Rubicon off-highway vehicle  (OHV) route is often referred to as the Grand Daddy of four-wheel drive trails. Its unparalleled beauty and diverse recreational opportunity attract thousands of Mountain bikers, motorcyclists, and four-wheel drive enthusiasts each year. Several years ago, under the threat of possible closure, four-wheelers joined together, took arms (actually shovels), and created the Friends of the Rubicon (FOTR), a grassroots organization created specifically to protect public access to the Rubicon.  Over the past three years, FOTR volunteers have coordinated multiple large-scale conservation projects in an effort to keep the area open. The most recent of those projects involved moving an entire building.

Friends Of The Rubicon, which was spearheaded by our own Del Albright, has taken a proactive stance on land use and environmental concerns in the area. Working with the U.S. National Forest, California Off-Highway Vehicle Division, and El Dorado Sheriffs department, FOTR has helped bring multiple government agencies together at roundtable meetings to address responsible continued access. While topics such as resource damage, over-use, and sanitation are at the forefront, educating the public on these issues will have the greatest impact on future access to the area.

Of the two official access points to the area, the trailhead near Loon Lake receives approximately eighty percent of the traffic. One of the long-range goals has been to have a centrally located kiosk for area information, posting of fire restrictions, and possibly storage for portable sanitary toilets. Rather than enduring the cost of erecting a new structure, a building previously used by the Sacramento Municipal Utility District (SMUD) was donated. The only problem was that the structure, which weighed several tons, was located four hundred boulder-strewn yards away.

Volunteers show up with trucks, Jeeps, trailers, generators, shovels, and hand tools to get any job done on the Rubicon.

In the Fall of 2003, twenty-five FOTR volunteers spent 335 hours prepping the building for transport and preparing the new kiosk location. The initial relocation plan implemented the use of a US Forest Service heavy-lifting helicopter.  With the cables and rigging ready to go, the pilot rolled on the coals. But the building, which was designed to withstand twenty-foot snow loads, refused to budge.

(Sorry, best pics we could find) The helicopter attempts to lift the heavy water tender shack.

A second attempt in May of 2004 was orchestrated by longtime Rubicon activist Dana Holland. In a coordinated effort with FOTR and the Top Gun four-wheel drive club, plan B was to move the building on the back of a flatbed semi. The tricky part was how to maneuver a fifty-foot tractor-trailer, donated by College Oak Towing in Sacramento California, to the site, and how to safely get a two-ton building on it. This is where the creativity and ingenuity from years of backcountry improvisation came into play.

Holland, who is a semi-truck operator by profession, mapped a course through the gauntlet of car-size boulders and was able to shoehorn the trailer to the site. As with all FOTR projects, this was done with the assistance of dozens of volunteers from various clubs. Acting as guides and laborers, low areas were shored up with timbers, creating a type of Roman road to minimize the risk of damage to the vehicle or area resources. The arduous task of lifting the building and placing it on the trailer was accomplished by a fifty-ton tow truck, also donated by College Oak Towing. 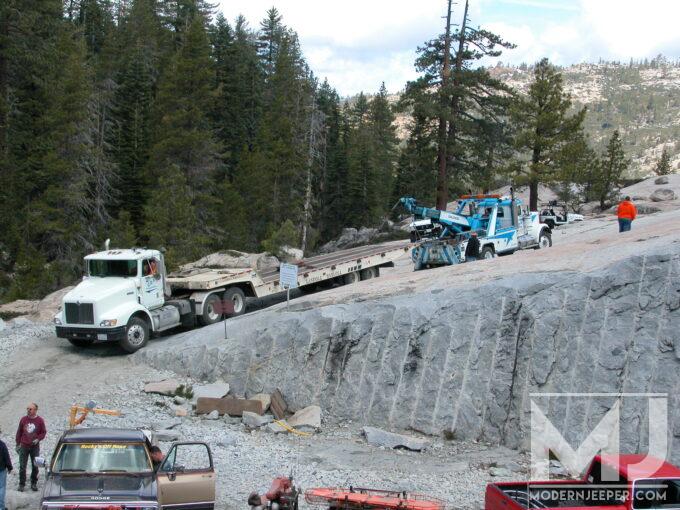 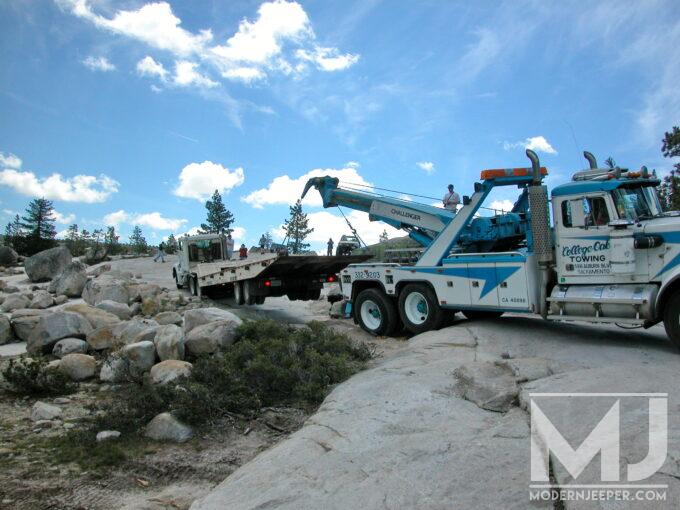 Dana Holland uses a wrecker to lift the flatbed trailer and get it through the rocky Rubicon Trail slabs.

With the equipment and volunteers in place, and the building cradled in a harness of cable and steel support beams, the extended boom from the tow truck gave a slight groan as the winch cables and rigging tightened. However, gravity was no match for Holland and his super-sized heavy hauler. A short time later, the old building was secured on the flatbed and on its way to a new home. When all was said and done, the Rubicon had a new kiosk and information center at the Loon Lake trailhead. 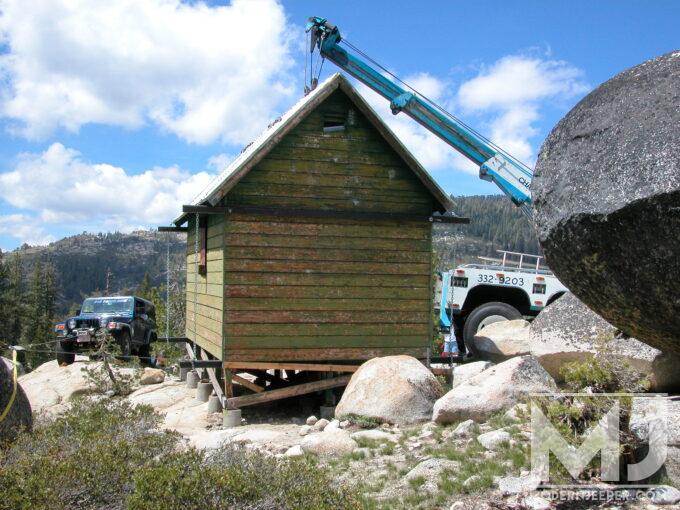 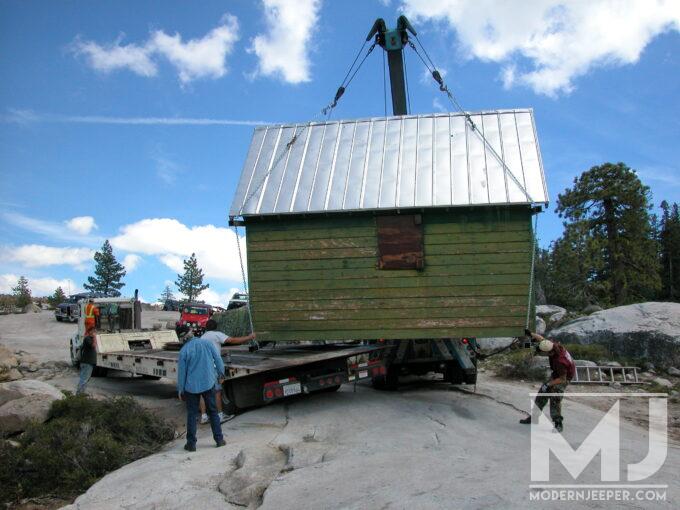 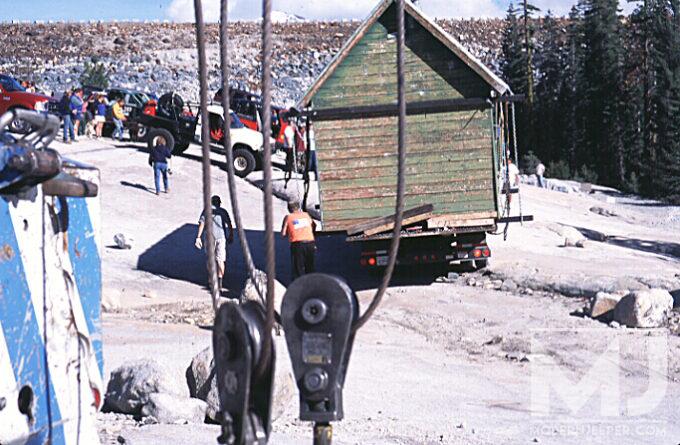 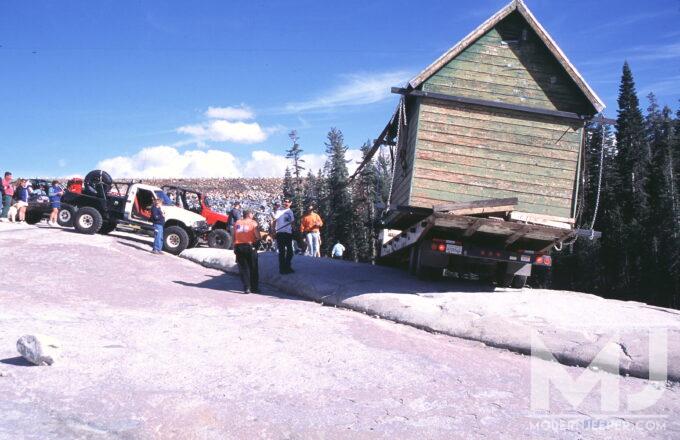 Dana Holland and Del Albright worked out an 8-rig anchoring system to hold the kiosk shack on the flatbed while it traversed the off-camber section of the Rubicon Trail Slabs.  4 rigs lined up with cables to the kiosk, and 4 rigs behind them each anchoring the front line anchor rig.  It was ingenious! 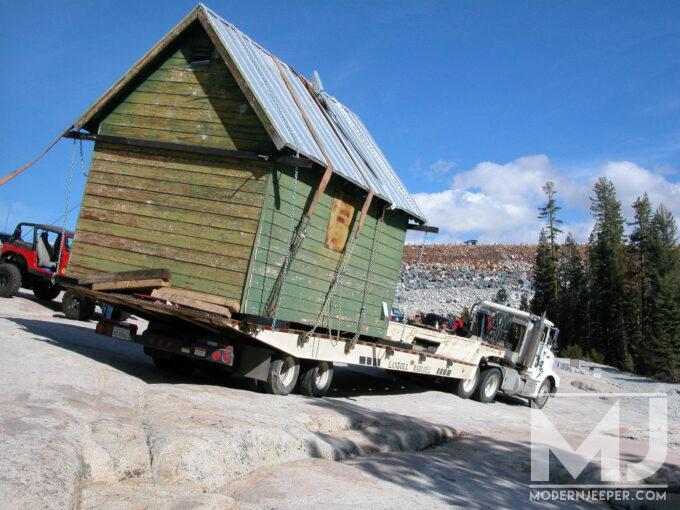 Off-camber?  No worries for the Friends of the Rubicon (FOTR)

Overall, the kiosk project was a huge success and involved the efforts of multiple interested groups and agencies. More than thirty volunteers put in a total of 464 work hours, twenty-seven four-wheel drive rigs were used, $9500 in equipment was provided by College Oak Towing, and a countless number of hot dogs and hamburgers were donated by the Top Gun four-wheel drive club for the work project BBQ. 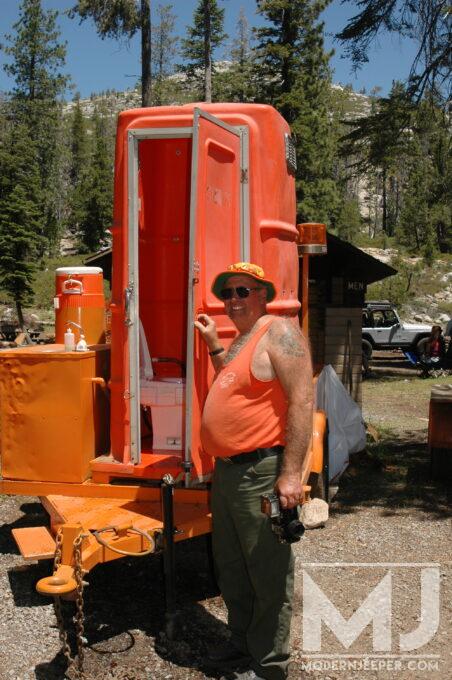 Besides wreckers and flatbed semi trucks, Dana Holland (RIP) liked to make sure volunteers had a potty too!

Getting the kiosk foundation poured and ready. 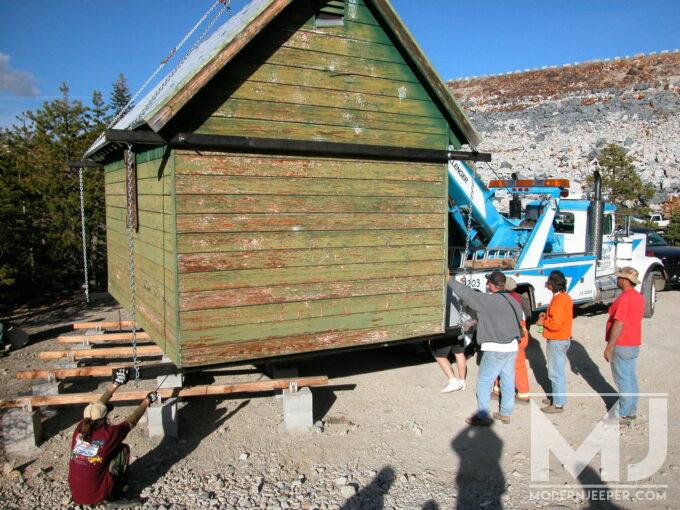 Dana Holland’s wrecker sets the kiosk on the foundation. 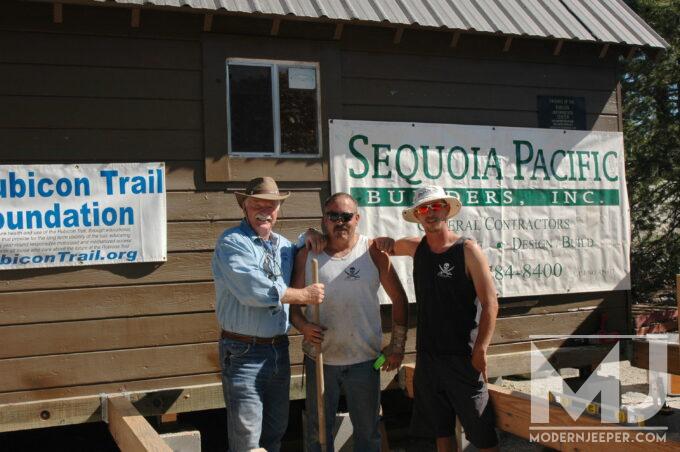 “The Rubicon is the crown jewel of four-wheeling,” stated Albright. And, “these volunteers are dedicated to doing whatever it takes to keep this trail open for future generations.” The kiosk project and others efforts by FOTR exemplify what can be done when a group of like-minded individuals gets together for a common cause. The key is to get involved and make sure you are aware of upcoming policies and when they are being written. And, that you have a seat at the negotiating table.  FOTR has perfected this practice, and resource managers are listening. If you are frustrated with current policy or threats of closure to your favorite area, FOTR is the perfect model to use in starting your own grassroots “Friends Of” organization.  For information on Friends of the Rubicon, how to get involved, or how to protect trails in your area, surf the world wide web to:  http://www.delalbright.com/Rubicon/rubicon.htm 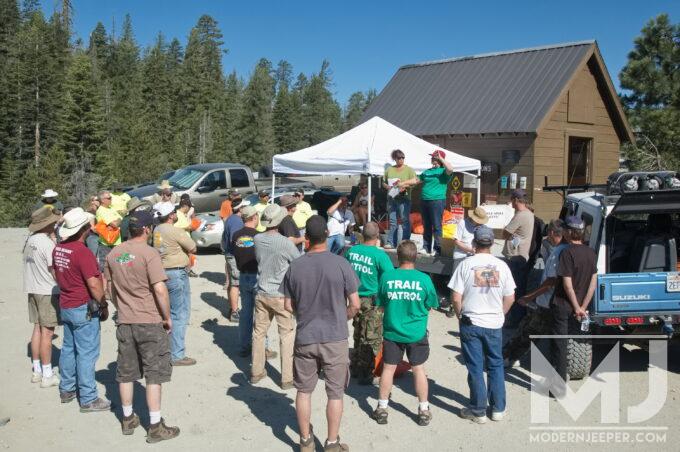 ModernJeeper appreciates the efforts, writing, stories, reporting, and wisdom of Chris Collard.  He has adventured the world by 4×4 with publications worldwide.