Jeeps3 Modern Jeeper5 radios5 Rugged Radios2
Note: This article is a product review (with radio mounting tips) that does not cover the FCC licensing requirements in-depth or how to be a...

Note: This article is a product review (with radio mounting tips) that does not cover the FCC licensing requirements in-depth or how to be a HAM operator.

Have you ever had that moment on a ModernJeeper trip when you just wanted to throw out your old CB radio?   We all know that sometimes they work great (not often) and other times they just suck and you want to throw it out the window (most of the time).  Staying in touch on a trail ride or convoy is half the fun; radios make that happen.  Here is a run down on Rugged Radio selections. 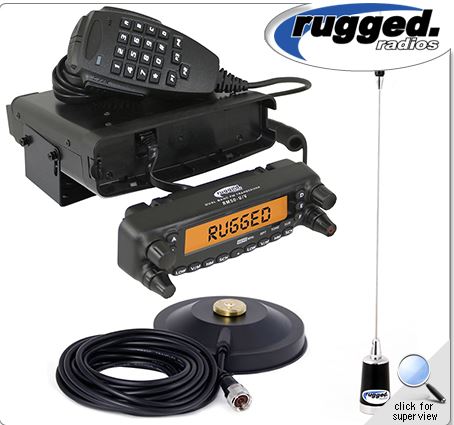 Some of us have recently switched over to the race radios (VHF/UHF), and primarily from Rugged Radios (www.ruggedradios.com).  I bought the RM-50R base radio and the RH-5R hand held radio.  The RM-50 has 50 watts of output power and is pre-programmed by Rugged when you buy it.  A cool feature of this radio, is you can take the front cover off and mount it up near the driver, and the main radio can be mounted out of the way.  This is useful if you don’t have much room on your dash to mount an extra radio.  In my Jeep, I have a cross bar between the two roll bar sections, and had enough room to mount the whole radio there.

I initially mounted the whole radio up top in the cross bar, but since then have moved the main unit under my seat, and the remote head is on the roll bar so I can see it easily.  The instructions were very straight forward and helpful in getting the radio up and running. When I ran the power wires from the battery, I wove them into the wire loom material for some extra protection.   There was no tuning of the antenna required. 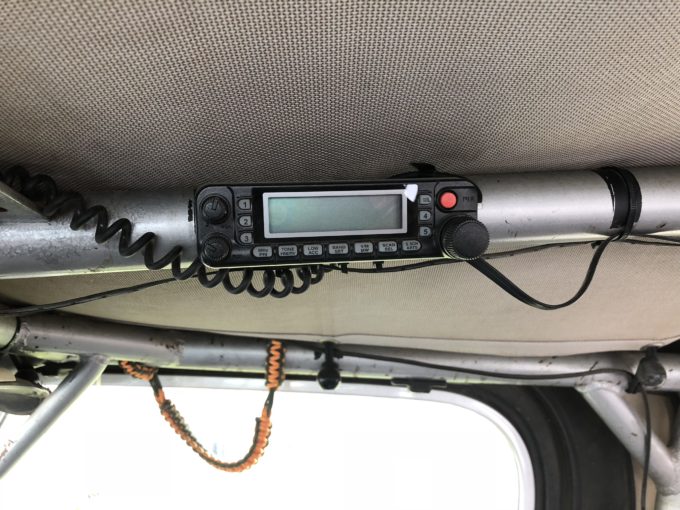 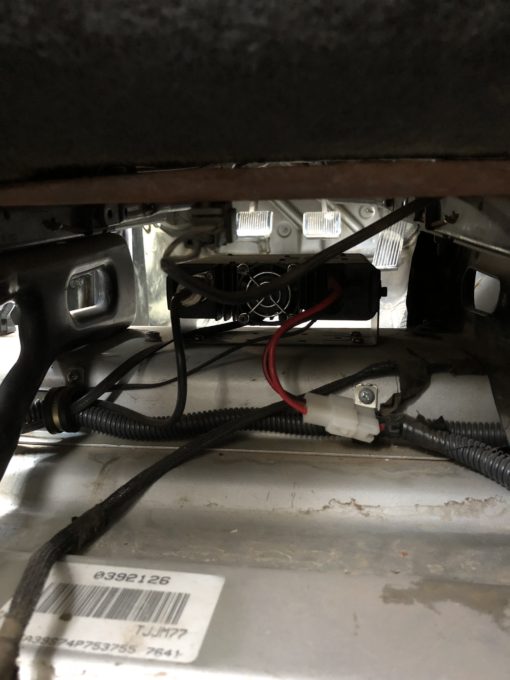 Main body of the RM-50 mounted under the drivers seat.

I mounted the antenna using a Rugged Radio antenna mount on the roll bar at the back of the Jeep.  This seems to work really well, and the antenna is out of the way.  I would get better range if the antenna was mounted higher on the roll bar.  If we take the soft top off for an extended time and off-roading, it is easy enough to move it to a higher mounting spot to help the range. 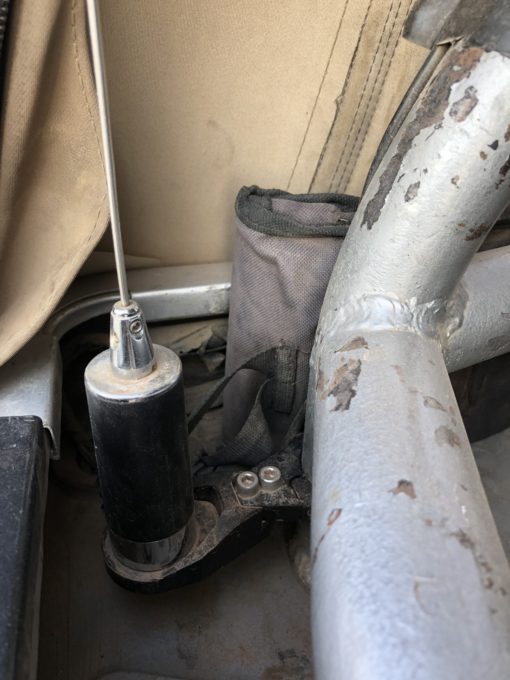 I have tested this radio many times achieving transmit and receive distances of around 10 miles in the valley area.  We had lots of obstructions in the way between the two of us trying to communicate back and forth.  This is well under the advertised distance of this radio.  I blame this on the obstructions of trees, houses and power lines between the two of us.  Next time we visit a desert area, we will test the distance again and I am sure it will greatly increase. 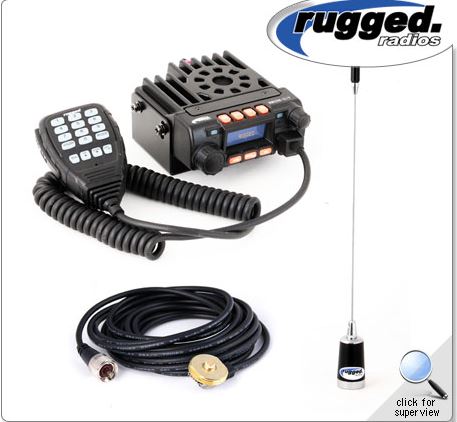 The other option from Rugged is their RM-25R radio kit.  This is a 25-watt radio programmed the same as the RM-50.  Installation is even easier, as the power connection is via a cigarette lighter cord.  A couple of my friends have this radio and like it as it has a smaller footprint than the RM-50R, and will fit in more places and take up less space. 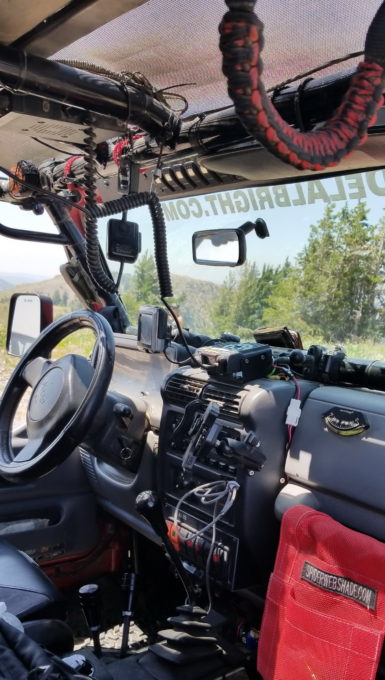 Race radio RM-25 on dash; CB mounted up top; looks busy but everything has a use.

Both of these radio kits can be bought with a hard mount antenna or a magnetic mount.  I bought the magnetic mount, as I wanted the ability to move the antenna around some.  In the summer when I take the top off the Jeep, it will mount up on top of the roll bar to help me transmit further.  They also sell different mounting options if you are installing these in a UTV/SxS.  Since the initial install, I have bought the roll bar mount option and mounted it on the rear down tube.  The antenna sticks out of the rear window of the soft top and works fine.  A note of caution though, the antenna cable or coax is pretty long.  Do not roll up the extra cable into a circle and zip tie it someplace up out of the way.  Find a path that most of the cable is strung out to help the signal in the cable not trip over itself.

These are still technically a line of sight radio, so the higher you can get your antenna, the better off you are.

The final option from Rugged, is their RH-5R, a hand-held radio with an output of 5 watts.  You have much less distance with this radio, but you have the added convenience of being able to get out of your vehicle and still communicate with others.  It is also pre-programmed by Rugged when you buy it so you can easily match other radios.

I bought this so I could hand it to a friend in his vehicle, and still be able to talk to him with a distance that is above what a CB will communicate.

Rugged has some options for this radio that is great for those on a dirt bike also.  They have a kit that has a Press To Talk (PTT) switch that you mount on your handlebars and a helmet kits with a microphone and earphones.  If you have a dirt bike, this is the radio to get so you can still talk to your friends in a 4×4 or SxS, or other dirt bikers.

The RM-25 and RM-50 can also be plugged into one of Rugged’s intercom kits and everyone can put on a headset to make communications in an open-air vehicle easier.

All of these radios can be programmed by using a free software program called “Chirp.”  I have had no issues programming extra frequencies into the RM-25 and the RH-5R with Chirp.  On the other hand, I have struggled and even messed up the programming in my RM-50, and had to take it back to Rugged to get them to clean up my mess.  They reinstalled the original programming for free.  Since then, I have not messed with trying to add additional programming to my RM-50 radio.  I have been able to program my RH-5R and a friend’s RM-25 with little trouble.

If you want to improve your communications while recreating, get one of these Rugged options for your vehicle at  www.ruggedradios.com

A word of caution on these radios — many of which have licensing requirements.  The VHF range operates in the business class area, and these frequencies get registered to a business for their commercial use alone.   If you use these radios in a congested residential or city area and someone is on a frequency in that area, it is probably a business, so move away from the frequency.  A good web site to check to see what is possibly being used in your planned recreation area is Radio Reference (https://www.radioreference.com/).  Not everything might be listed though.  If you operate in the HAM frequency range, you must have a license from the FCC.  For more information on the GMRS rules, go here: https://www.fcc.gov/general-mobile-radio-service-gmrs .  If you want to study for your FCC HAM “tech” license, here is a site with some good guides https://www.kb6nu.com/study-guides/. 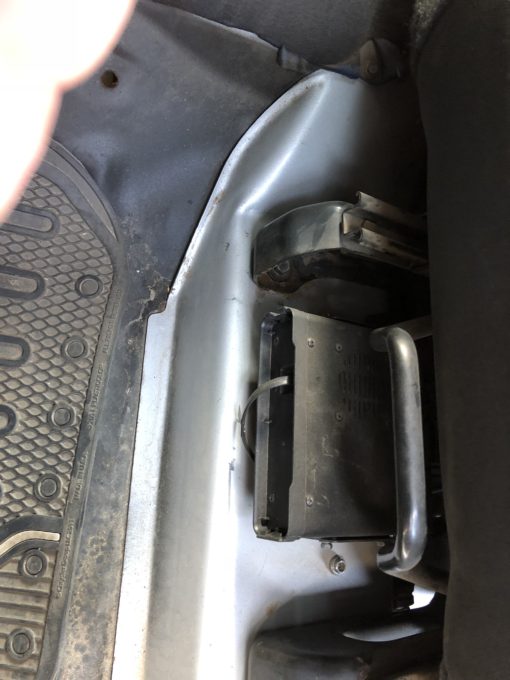 Under seat option for radio location 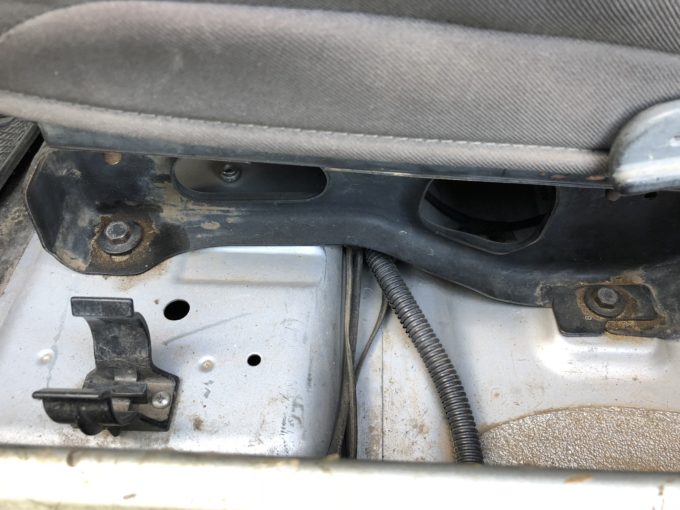 Following existing channels and other routes for wire routing.

Rugged Radios offers you a good array of options. Stay in touch and make your jeeping much more fun with a radio that works!