[pics & vid] Declaration of Battle! From Jarbidge, Nevada Shovels to the Future of the Rubicon Trail

fotr1 landuse65 rubicon trail8
“FOURTH BRANCH” OF GOVERNMENT – THE UN-ELECTED TAKE BACK A TRAIL In this story and further history of the Rubicon Trail, we must bring...

“FOURTH BRANCH” OF GOVERNMENT – THE UN-ELECTED TAKE BACK A TRAIL

In this story and further history of the Rubicon Trail, we must bring forth some more little known facts about our trail in the last couple decades — and how these facts impact all other trails and roads in America.  And here we will also share our praise of the “fourth branch of Government” as noted in the video below with Demar Dahl.

Maybe we need another “bucket brigade” to save your trail?

In this Rubicon story, you need to know of these organizations and the incredible access-circle they make: Jarbidge Shovel Brigade; Klamath Bucket Brigade; Nevada Bucket Brigade; and Friends of the Rubicon. 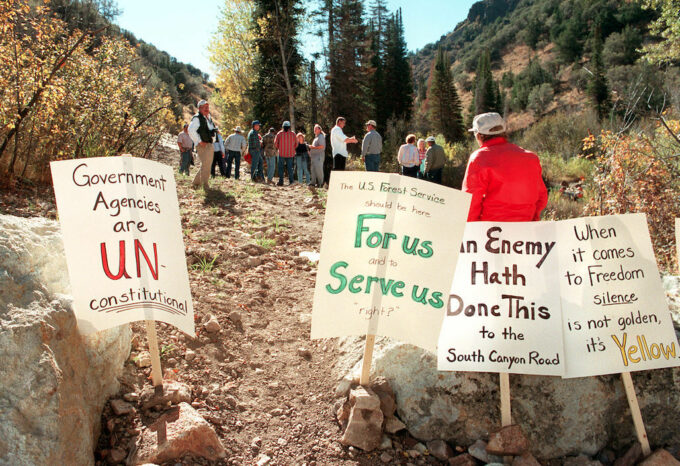 Here is the synopsis of the story…

July 2000: Jarbidge Shovel Brigade formed, Elko for Jarbidge, then commonly referred to as the South Canyon Road.
Dec. 2000: Placer Co. gets Cease and Desist Order from Lahontan Water Control District. A gate on the Rubicon is proposed.
May 2001: Klamath Falls Bucket Brigade formed for water rights and the battle against the Endangered Species Act (ESA).
Aug. 2001: Jarbidge Shovel Brigade forms Nevada Bucket Brigade to support Klamath Falls; convoys come from 7 western states to support Klamath Falls.
Aug. 2001: Friends of the Rubicon formed for first work party weekend, Tahoe side; Placer Co. to stop the gate! Jarbidge Shovel Brigade sends a truck full of Jarbidge, signed shovels to FOTR for Rubicon trail work. FOTR put them to work! The gate was stopped and the trail is in the hands of the users with support from El Dorado County.

On Independence Day, July 4, 2000, some 300 protesters armed with shovels disrupted their barbecues and fireworks to journey to this northern reach of Elko County in the northeastern corner of Nevada. Calling themselves the Jarbidge Shovel Brigade, they gathered to defy the U.S. Forest Service by clearing a narrow road on federal land that had been blocked by the agency. 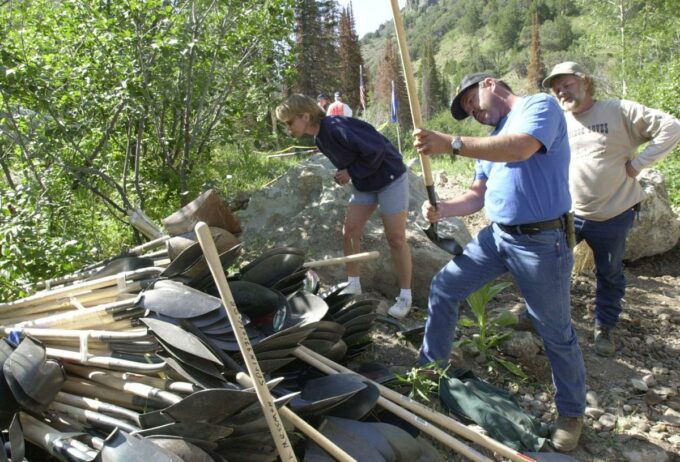 A mile or so of the road had been washed out by a flood in 1995, and the agency had decided to keep it closed, saying that construction would hasten erosion and threaten the river’s dwindling population of bull trout. 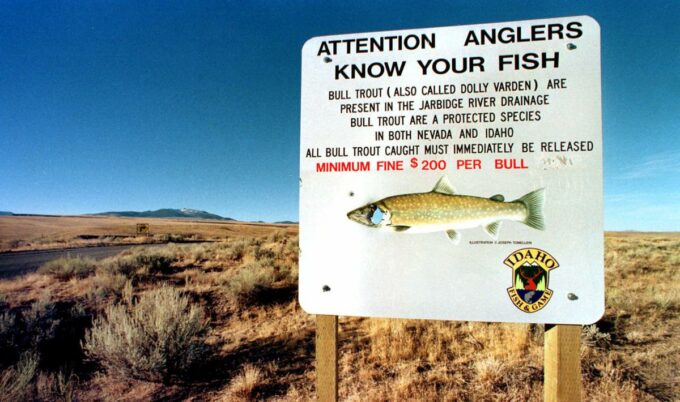 Long angered by federal restrictions on everything from water access to grazing rights, county officials and anti-federalists across the West seized upon the obscure road as a symbol of their discontent. “We will rebuild the road, come hell or high water,” declared Tony Lesperance, then an Elko County commissioner. 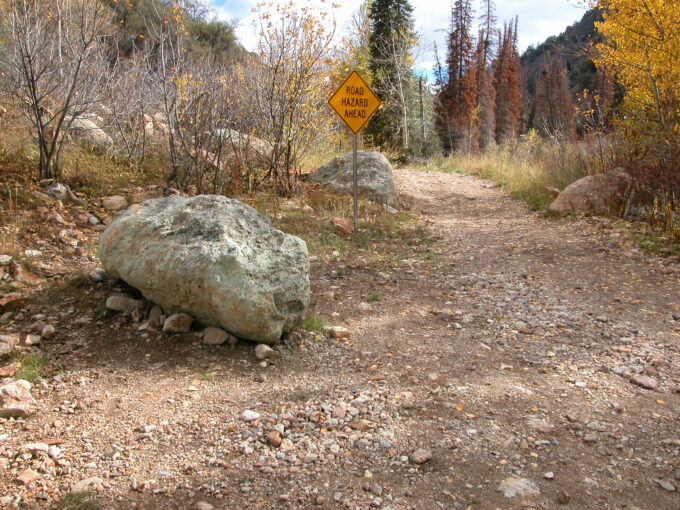 Some called the big rock shown after being moved from trail (see video), the “Liberty Rock.”

The nation converged on remote Jarbidge to rebuild a road, more known as South Canyon Road that the federal government said they couldn’t use or open. 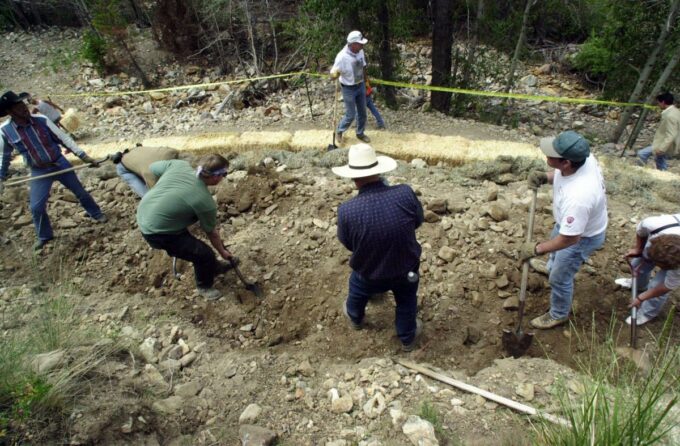 Hundreds came from Idaho in donated school buses, descending a rough canyon grade. When they got to Jarbidge’s South Canyon Road, they hauled out of the way a boulder with which the Forest Service had blocked the road (the Liberty Rock). They used thousands of shovels, donated by supporters throughout the West, to clear a few hundred feet of the closed road. 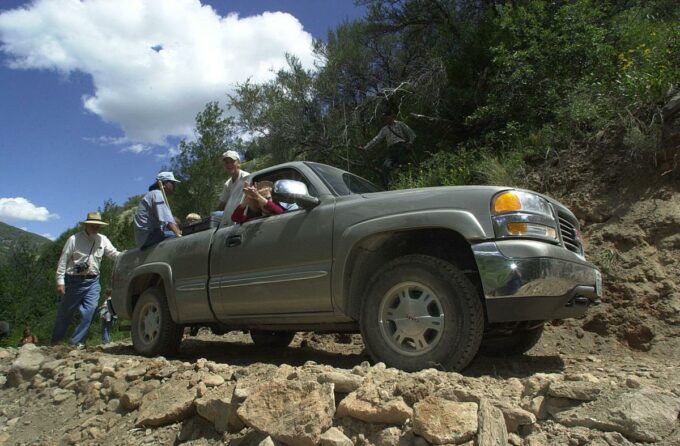 On May 7th, 2001, more than 20,000 people held a “bucket brigade” in Klamath Falls to protest the federal government decision to cut off irrigation water that serves more than 90 percent of the farmers in the area – over a sucker fish.

Participants passed 50 buckets of water, one for each state, through the heart of the town to illustrate their displeasure at the government’s decision to give first priority in the drought-stricken region to the protection of sucker fish and Coho salmon.

The buckets became a symbol of the resistance by and ownership of public lands and waters by the “fourth branch of government,” we…the people.

Convoys from seven western states came to the Klamath Basic in August 2001, including a contingent from the Jarbidge Shovel Brigade. Shovels and buckets were delivered to 30 states total.

The Rubicon Gets Shovels…

When a gate was proposed in December 2000, volunteers and users began mustering for the fight back!  Early spring 2001 many future FOTR members showed up at a special meeting of the Board of Supervisors, Placer County, with shovels in hand.   Some of them were painted green, like the eventually accepted logo of FOTR.  There was no violence planned or intended; just a showing that we the users were willing to put our backs and hard work into keeping the trail open — shovels in hand, ready to go to work.

August 2001, on the first work weekend of the Friends of the Rubicon (FOTR), a truck full of shovels showed up to support our efforts – from the Jarbidge Shovel Brigade. Each shovel was signed and had been used to open South Canyon Road – the Jarbidge Trail. 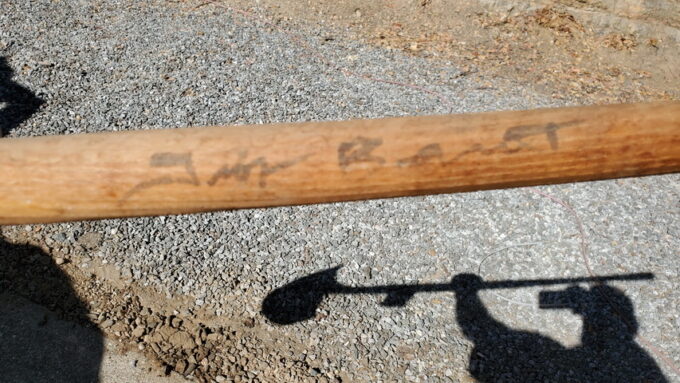 The author saved this Jarbidge shovel that helped save the Rubicon Trail in August 2001.

This is how it should work…

Groups and organizations helping each other; states supporting other states; volunteers setting aside club and turf issues to bring harmony to our cause; and voices singing off the same sheets of music – THAT is how it needs to be.

If you watch the video you will see the rancher declare that this particular South Canyon Road does not directly affect his particular ranch…but the concept of having our liberties taken away without our voice and our say, he said NO WAY. He took a stand as did thousands of others. Just we did on the Rubicon Trail.

Join, Advocate, Include Others and Write Letters!  Do you part, whatever that may be. 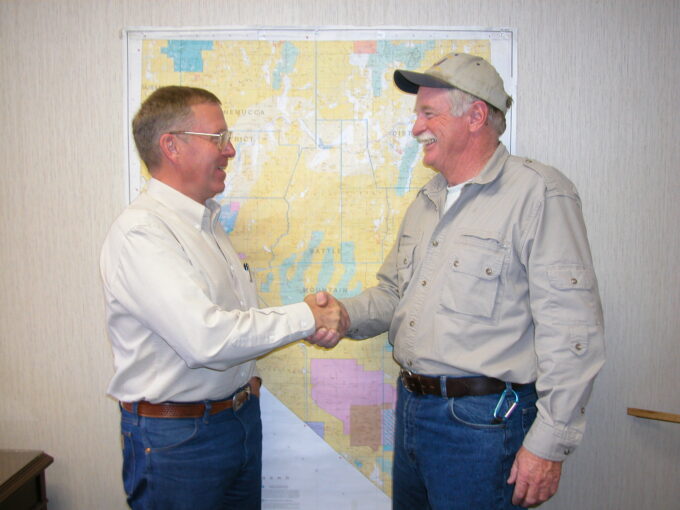 (Circa 2007) The author meets one of the key players in the Jarbidge Shovel Brigade and Nevada Bucket Brigade, Grant Gerber (R.I.P.)

Ps. Special thanks to Sarah Licciardi for these “today” pics of Jarbidge: 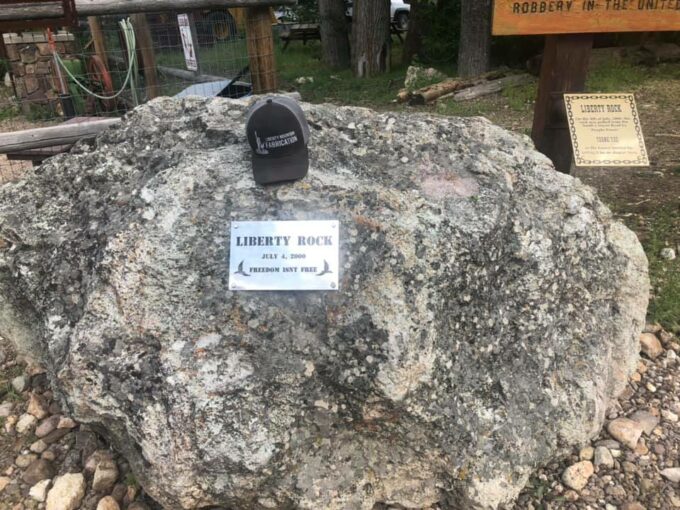 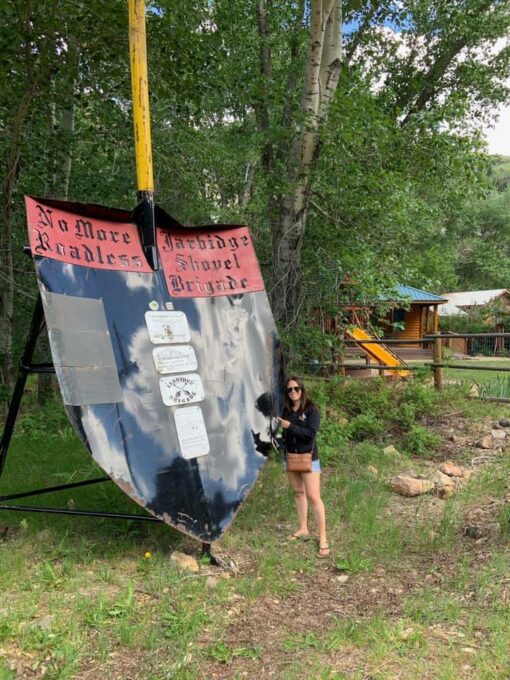 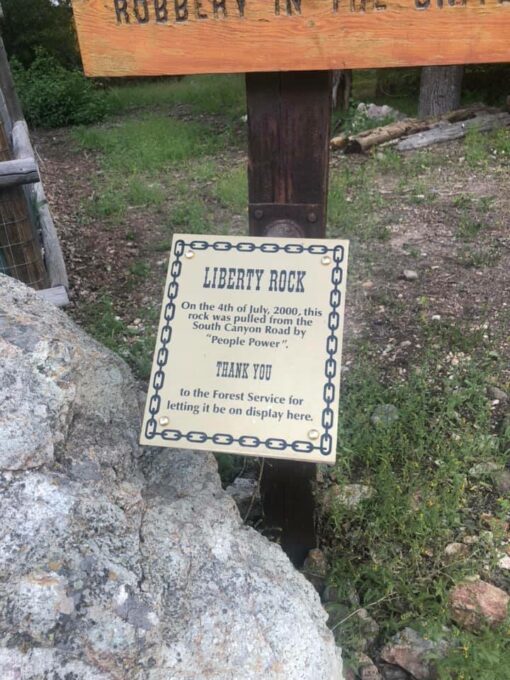 Untold story of the Rubicon and how we stopped a gate: https://modernjeeper.com/how-we-saved-the-rubicon-trail-the-untold-story/

A Rubicon Trail primer to help you get ready: https://modernjeeper.com/be-tuned-in-a-rubicon-trail-primer-part-i/

[pics] 6 Tips and Steps for Starting a New Club! Hot

[pics] 6 Tips and Steps for Starting a New Club! Hot

The Tale of the Dead Men’s Jewels of Death Valley