Death Valley Trails to the “Rim of Hell”

death valley9 desert4
A Taste of Desert History It seemed like months of baking, desert sun since he had tasted a decent drink of water. His tongue...

A Taste of Desert History

It seemed like months of baking, desert sun since he had tasted a decent drink of water. His tongue was swollen and dry. The sun felt like it was burning a hole through his old miner’s hat. His lips were long since chapped beyond recognition, but he wanted to find that pot of gold he’d been looking for. Heat was part of mining in the desert. Nonetheless, August in the Funeral Mountains of Death Valley was no place for a man to be alone. But it was 1871 and he was alone. He thought. 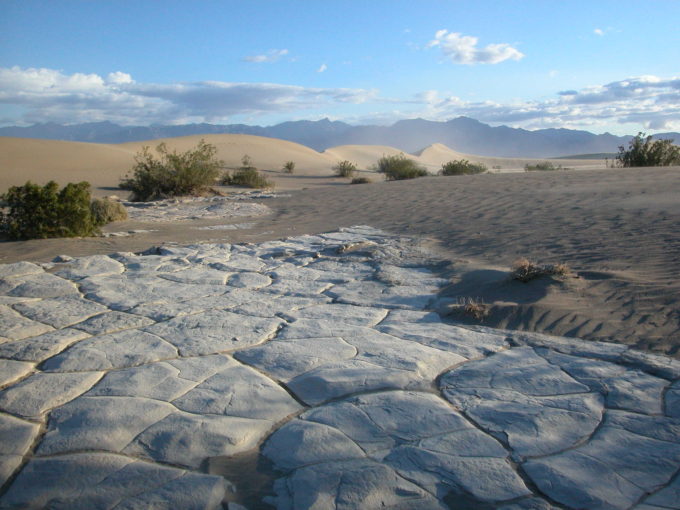 Imagine being alone crossing sand dune flats over 150 years ago.

His mule was down slope several yards, trying to find something to munch on in the sparse desert vegetation. He had only his pick with him – and a good thing too! He almost brought his solitary life to an end when he spotted the rattlesnake in just the nick of time. Catching himself, he pulled up his foot, stopping his step in mid-stride and jumped back a’swinging just as the rattle tail struck out! The miner chopped down with the pick, making sparks fly off the rocks, and won the battle with the snake. 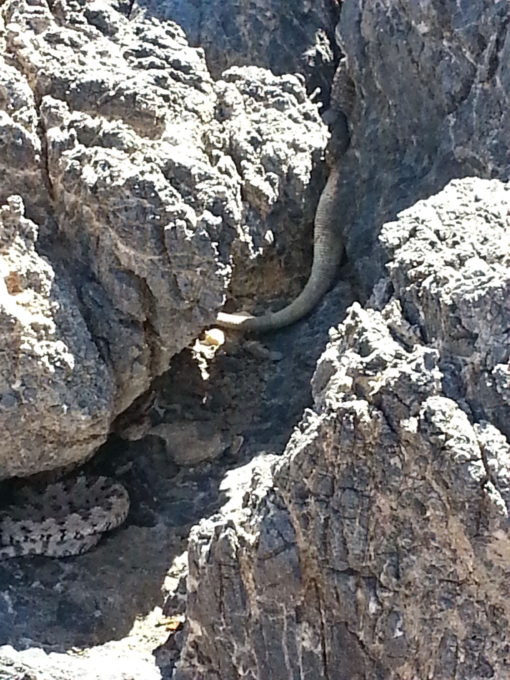 Rattle snake sharing a rock pile with a Chuckwalla lizard.

In the aftermath of the fight, he saw where his pick had busted up a good bit of dirt and rock. The rock had “a look to it” like ore. He felt it and looked closer. His heart almost stopped. He had found silver! He was going to be rich!

Well, like all stories of the desert, things are not always as they at first seem to be. The old miner had found silver chloride ore and a boom started faster than you can say Death Valley Scotty. The initial strike turned out to be mostly lead chloride instead of silver, they look very similar, but still miners were flocking to Chloride City on the Chloride Cliffs. Some mines were productive; most were not.

The Real World
Today you can visit Chloride City in your 4-wheel drive and have a wonderful day exploring what is left of our heritage in this once raucous boomtown of the old west. Located directly above Keane Wonder Mine, south of Hell’s Gate, the Chloride Cliffs were also known as the “Rim of Hell.”

Gold was also discovered there, in fact, on two occasions. Chloride City took on another nickname in 1878 as the “City of Gold.” This boom lasted about five years. Then in 1905 gold was discovered again. Welsh, Cornish and Irish miners were imported to the area to apply their mining skills to some pretty harsh conditions.

If you consider that their drinking and mining water had to be pumped up hill some 3500 feet from Keane Wonder Springs, you can only marvel at their ingenuity and persistence. In those late 1800’s, miners did some amazing things in search of their own pots of gold. A lot of them died trying, and the gold veins petered out in a few years. The town started to die quickly thereafter.

Traveling to Chloride City Today
On a recent trip, we could see plenty of mining evidence still standing as we made our way up to Chloride City. I recommend starting your journey from Daylight Pass. We turned off of Nevada Hwy 374 about 3 miles down from the summit going towards Death Valley proper. The National Park Service put a Jeep type sign indicating 4×4 high clearance vehicles only right where we left the pavement. Shortly after turning off, the road turned to dirt and we pulled over to air down. 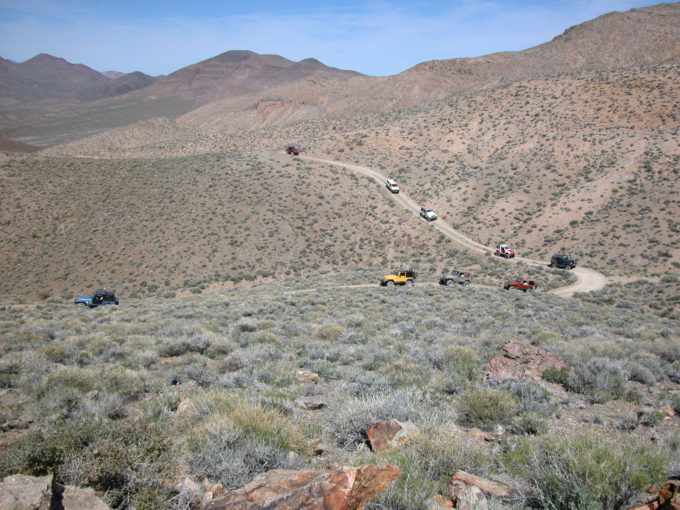 Airing down makes the ride on road a lot more comfortable.

Desert flowers, creosote and a few cacti graced our travel as we continued about three miles to our first turn to the right on a good dirt road. This is the Monarch Canyon Road and it is worth the less than one mile to an awesome view of a beautiful rocky, deep canyon from a steep drop off dry waterfall. It’s a dead-end road, so after a few pictures of the view, we turned around and headed back to the Chloride Road. 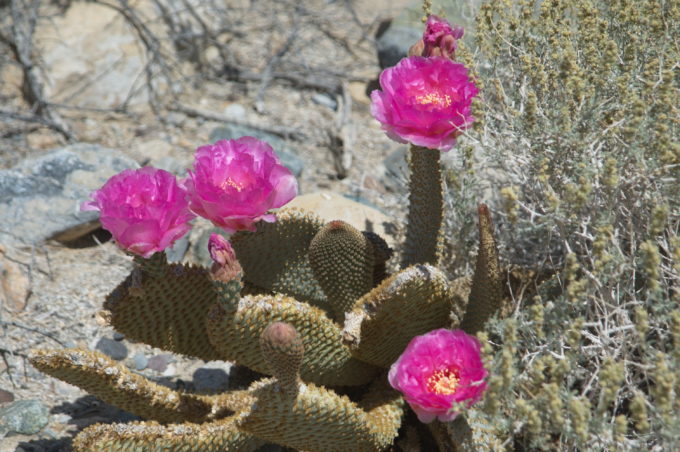 Finding a desert cactus in bloom is always a treat.

There were a couple places where the Jeep bounced over a few rocks in the road, but nothing serious. A few of the drivers in my group put their rigs in four-wheel drive just to eliminate tire spin and make the road a little smoother. I’d say this road is more about airing down than worrying about 4×4. We chose 20 pounds tire pressure to soften our ride and reduce our impact on the road.

A half mile short of Chloride City, we made our only other turn, to the right, and headed up the final hill to town. Dust was a bit thick in the air now as a desert breeze had picked up. But it was all worth it. As we crested the hill and could see the remains of Chloride City high on the cliffs above Death Valley, a feeling of old time west came over us. It was almost eerie. I stood there thinking that in this place, it must not be uncommon to share a breath of desert air with ghosts of times gone by. 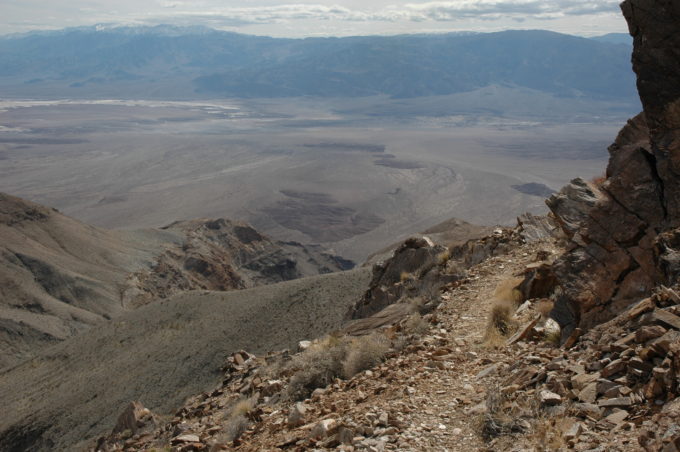 Some roads peter out into just walking trails. The views are usually worth the walk.

The hillsides around Chloride were scattered with the remains of mining gear, “Cousin’ Jacks,” (three-sided dirt huts with a wood front/door sometimes reinforced with rocks), old cars and foundations. Tin cans were abundant, and a few buildings were still standing. We could tell it had been a rough and tumble place in its day. 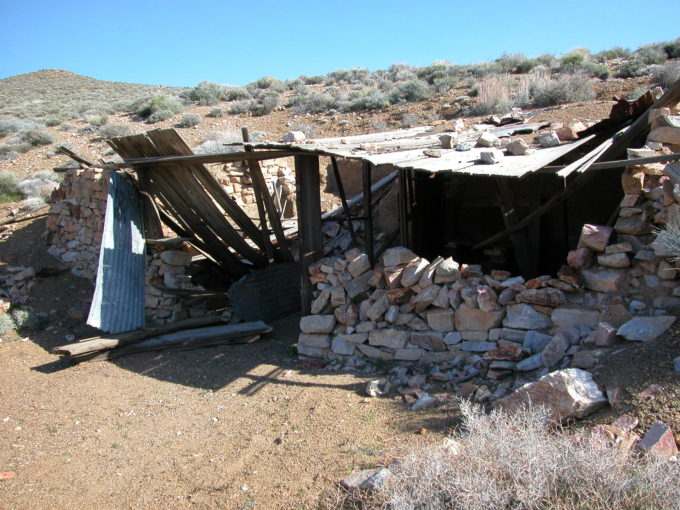 “Cousin Jack” used by Cornish and Welch miners, this house was easy and quick to build.

On top of one of the surrounding ridgelines, we parked and walked to what I nick-named the crystal caves – natural rock inter-linking caves mined out for the chloride crystals that line the cave walls. It reminded me of something out of a Disneyland ride – nearly artificial in appearance but real to the touch. Below the caves we could see a 5-stamp mill and old-time iron pipe, along with mining debris from the turn of the century. 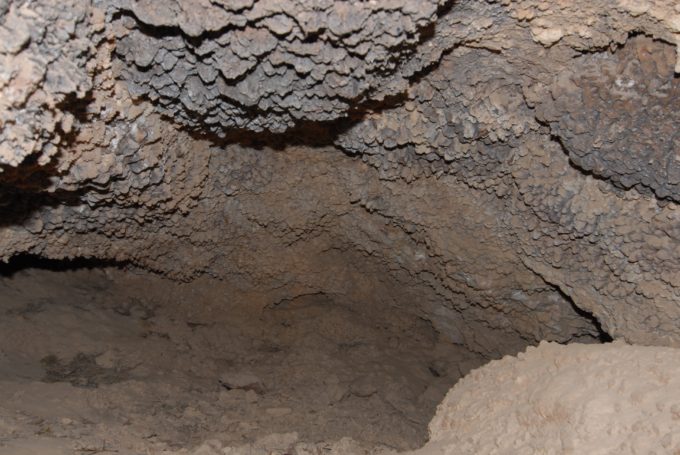 The wind picked up pretty good towards mid-day, blowing hats off on journeys of their own, so we convoyed down to the main part of where town once stood and had lunch near the only remaining grave site of one, James McKay. You can still find it.

A lot of people died where they worked in those desolate rugged mountains of Death Valley. And even more went broke trying to get rich. In fact, the saying in the mining camps of later years became: “More money went in to the ground than ever came out.”

After lunch, my group got the four-wheel drive bug, so we negotiated a few good rocks down a gully into a side canyon that lead to more buildings and mining relics. The cabin here was fairly intact. Yet it was still hard to imagine being stuck up on this mountain in the late 1800’s. Heck for that matter, I didn’t want to get stuck up there at all! So, we reversed our route and headed home after a great road trip to the “Rim of Hell” where the “City of Gold” never came to be. 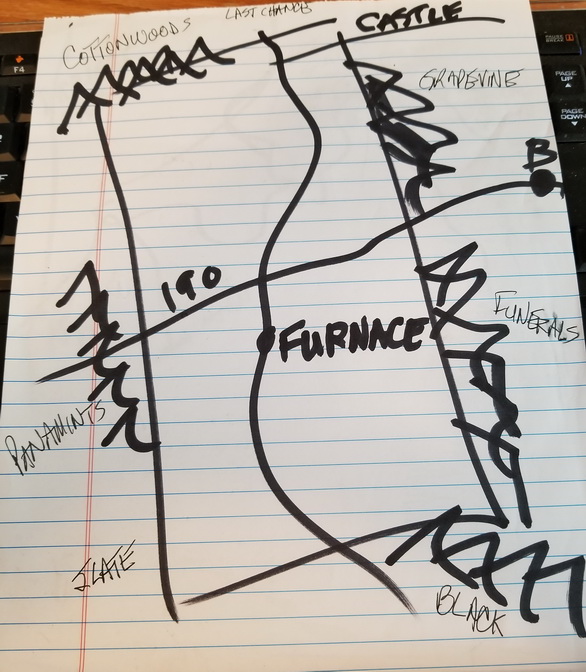 Take a good map; not a joke like this one.

For this trip, I recommend you take along a good topographic map, such as the Trails Illustrated Map of Death Valley, and a good tour book such as Roger Mitchell’s Death Valley SUV Trails (Track and Trail Publications).