The Tale of the Dead Men’s Jewels of Death Valley

death valley11
A HIDDEN TREASURE AND MY OBSESSION TO FIND IT I was alone in a vast desert. My heart picked up tempo as I sat...

A HIDDEN TREASURE AND MY OBSESSION TO FIND IT

I was alone in a vast desert. My heart picked up tempo as I sat in my Jeep and gazed across what seemed like hundreds of miles of ruggedness. A couple flies kept me company while I scanned the desert with my binoculars, searching for clues.

I knew the hidden cabin had to be nearby. I could almost feel it. But then again, I get like that when I’m roaming a back-country road in a place like Death Valley, where visions and mirages are common place.

Sweat dripped from the brim of my old desert hat as I alternately checked the map and glassed with the binoculars. My map notes were not very clear as to where I would find the cabin and the treasure – but I just had one of those “been-in-the-desert-too-long” hunches that kept pushing me onward.

My Jeep was perched on an old narrow cliff-hanging road that was winding its way down off Tucki Mountain to places I had never been. I’d been looking for the secret cabin for a few years, off and on, but I’d not been to this particular spot. I knew the jewels and treasure awaited me and my camera, so I continued to inch the Jeep down the road.

Along the route, I passed remnants of mining days gone by – old cyanide drums, rusted out vehicles, and even an old wooden-spoke wheel wagon with a single-tree still attached. The wagon showed not one sign of disturbance and was quite a find for an old explorer like me. 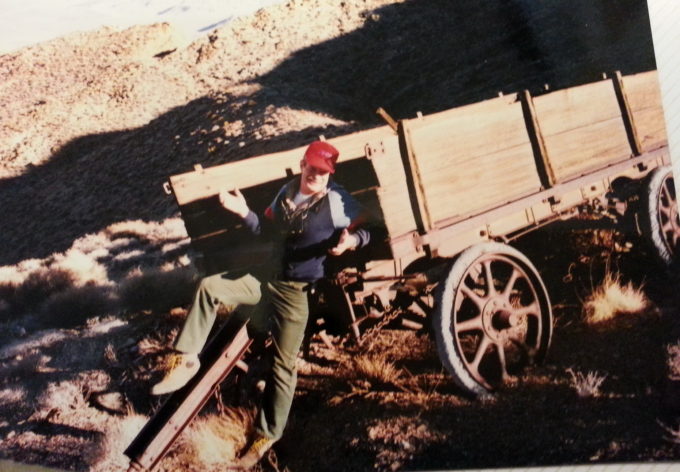 Miles from no where, untouched since it was left

I stopped for a good swig on my water bottle and reviewed my notes and clues. I could see the scene in my mind…

A Long Long Time Ago, In an Era Gone By…

As the two pistol-packin’ men sat across the hand-hewn wooden table from each other, they wondered which would be faster to the draw. The jewels and gold sat on the table between them; beckoning for only one owner. The desert heat pushed the sweat out from under the brim of each man’s tattered hat. The air was thick.

The old prospector’s cabin was so remotely located on a side slope of Tucki Mountain in Death Valley that both men knew no one would hear the inevitable gun shots. There was just too much money sitting there, and both men wanted it. They had been arguing and lying to each other over the jewels for days now. It was time to settle it once and for all. 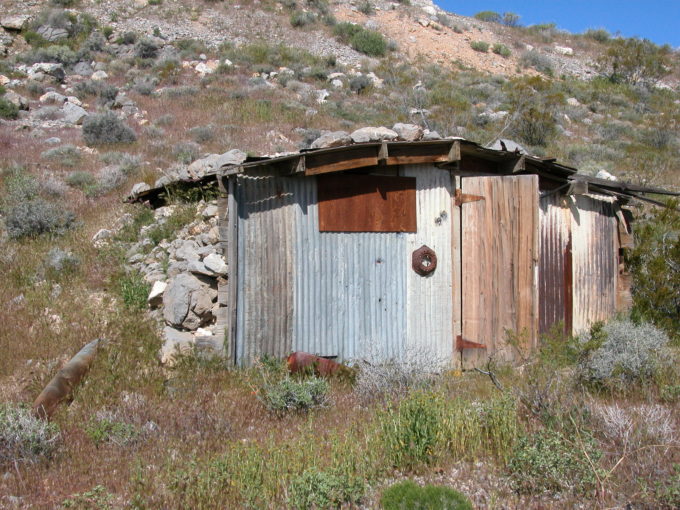 Typical mining cabin; but not the one I was seeking

Rediscovery and the Journal

Twenty years later, in the late 1870’s, the cabin was re-discovered by a map-maker and adventurer. He saw it from a distance and knew it was deserted. There was no sign of life; no dust; no burros; nothing but the old cabin.

As he approached he noted the distinctly eerie feeling that not all was as it appeared. There was something amiss. He got close enough to peer in the old, partially broken out window near the front door. What he saw nearly sent him careening down the gravely slope! There was the table. There was the bag of gold and jewels. And there were two skeletons hunkered over the table; both with guns in their hands.

He finally got the courage to step inside. His imagination told him he smelled the musty scent of old gun powder; but he knew that couldn’t be. The scene told the tale. The two men had obviously been fighting over the bag treasure. They had sat across the table from each other and drawn their revolvers at the same time. As he further examined the skeletons, he noticed that they had killed each other with just one shot apiece…right to the heart, for there was a bullet mark on each man’s sternum. They had died right where they sat.

He looked at the bag on the table. One dead man’s bony hand was very close to it. It looked like something to not touch. He debated; then thought better of it. There was a dead man’s curse on that bag. It would be best to leave it be.

Then he noticed a trap door on the floor of the cabin. When he lifted it up, more of the story unfolded. It led to a mine shaft. The walls were not curbed nor shored; and the footing looked too dangerous. Again, he decided in favor of safety and did not go in. But in his mind, he knew that the men had probably found some of the gold and other jewels in the mine shaft. It may have been hidden there by outlaws; or perhaps these men were outlaws? No matter, he decided to leave it all as it was…

He made notes in his journal; closed the door to the cabin; left the mountain, and never came back.

And My Obsession Began…

I personally discovered this journal hidden away in an old library two decades ago.

I have been searching ever since for the cabin.

I didn’t find it on this trip, and I have yet to find it. But I will find it someday; and as the man did before me, I will leave the jewels and men to their peace.

But I will sure as heck take a ton of pictures!!!