There is a plethora of information out on the info web regarding transfer cases…what they are, how they became and what they do. We...

There is a plethora of information out on the info web regarding transfer cases…what they are, how they became and what they do.

We thought it would be beneficial to not re-create what has already been written, but to share what we know and what we have found useful in regards to the piece that separates the two-wheel drive folks from us, the 4-wheel drive folks.

I don’t want to go into the history of the transfer case in this article, but if you are interested in that information you can check out the following links:

Also, rather than get into every variation of t-case out there, let’s just talk about current and recent models, since they are the most common to our readers.

So, do you drive a TJ? An LJ? Or is it a JK or JKU? Does it have a 231, a 241? Is it a Rubicon? Do you need and SYE or not? Does the driveshaft matter? These are the most common questions we hear on and off the trail. 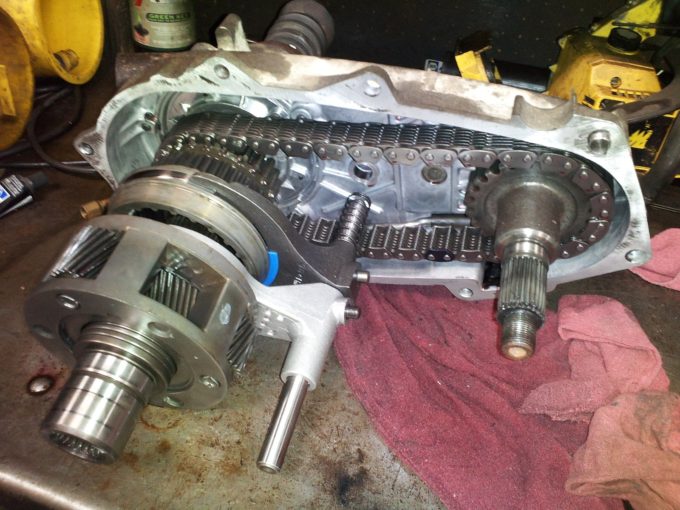 What used to be called the NV 231 and then became the NP 231, these two transfer cases are basically identical and share interchangeable parts. Introduced in 1988, this transfer case is now simply referred to as the 231J. It is found in ’88-’01 XJ’s, ’88-’95 YJ’s and ’97-’06 Wrangler TJ’s and LJ’s. They can be spotted by the red tag on the rear side of the case itself. It features an aluminum housing, chain drive, a driver side front output and centered rear output. It features a low range gear of 2.72:1. The major variations of the 231J-transfer case are the input gear which can be found in 21 and 23- spline and a short, medium and long versions of each. It is a strong transfer case and can handle upwards of 1,600 lb-ft of torque. They are easily upgraded and rebuildable, but as time has gone on, many of the upgrade options have become obsolete. Keep reading as to why we say that…

At one time, a great option was to upgrade the 231 with the Tera-lo 4:1 kit. This kit provided a true 5 gear planetary system by replacing the front half of the transfer case. 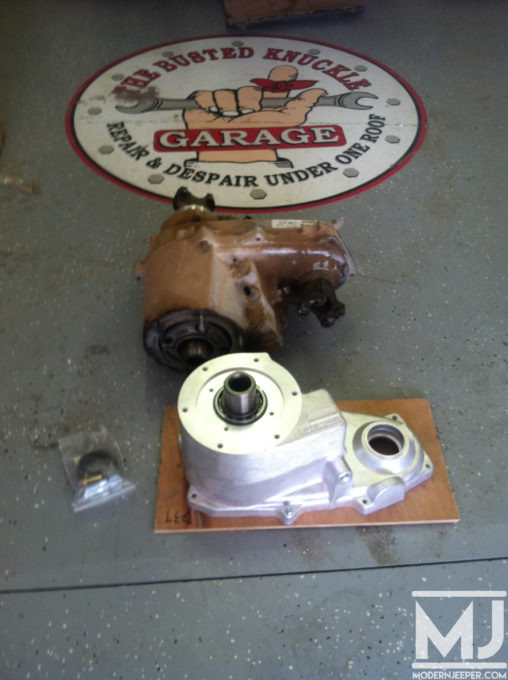 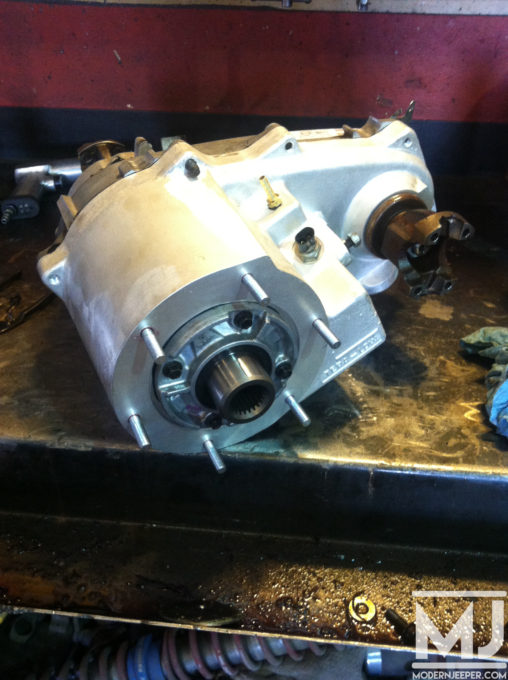 To understand what truly goes on inside the transfer case, just think of it this way as an example. To go from a 1:1 gear ratio to a 4:1 gear ratio, bearings and gears spin 4 times faster. So imagine at 2,000 rpm…the internals of the transfer case are now spinning at 8,000 rpm! Factoring in the torque loads taking place on gears and planetaries all within a chain driven unit…well…lets just say its difficult to retain long term reliability. 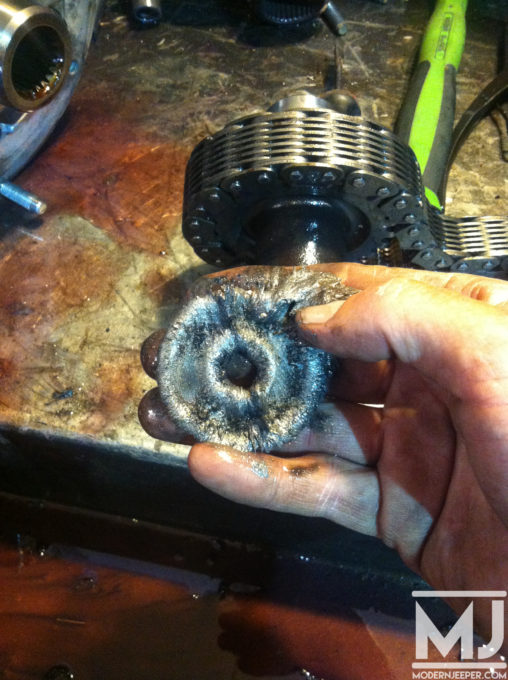 Released in 2003 and found in the ’03-’06 TJ/LJ’s and ’07-’12 JK/JKU’s (the Rubicon models feature the 241 OR  or Rock-Trac), this is the latest and greatest in Jeep transfer case technology. Jeep finally listened to Jeep owners and the aftermarket, and gave the consumer the transfer case they have been building from the 231J for years. While the NV241 still retains the same 2.72:1 low range as the 231, the 241 OR features a 4.0:1 planetary reduction, a heavily ribbed and reinforced aluminum case and a fixed yoke rear output. The front drive is chain driven and offset to the driver’s side while the rear output is centered. This transfer case was originally designed to withstand the torque output of the Cummins Diesel, as such is one of the strongest ever installed in a factory Jeep. They continue to be difficult to find inexpensively, but are still a viable option to swap into a non-Rubicon model Jeep.

Shown on the right is the Rock-Trac, which is known as the 241OR (OR stands for off-road). The non-Rubicon model is labeled 241J.

What is a Slip Yoke Eliminator and why should they be used?

The SYE kit replaces the stock slip yoke and housing with a sealed housing and a fixed flange or yoke. This fixed flange or yoke is what a new CV style driveshaft will bolt up to. A CV (constant Velocity) shaft uses two U joints instead of a single one and this allows for much steeper angles. These shafts also utilize a two piece design that allows for suspension travel by allowing the shaft itself to compress and extend verses the yoke sliding on the output shaft. The sealed output now also allows for the rear driveshaft to be removed from the vehicle and not allow the transfer case fluid to empty out of the transfer case.

When should a SYE be used?

If you’re fortunate enough to have the NP241OR Rock-Trac transfer case, you don’t need a SYE, since this transfer case already has one from the factory.

The stock rear driveshaft is a fixed length unit that relies on the slip yoke to adjust when the suspension travel. When lifting a TJ, the angle between the rear axle pinion and the slip yoke become much greater. The factory setup was not intended for these variations in lift. The angle difference will be most noticeable in the fact the slip yoke will be pulled further out of the housing than before the lift.

The differences in angle can be attributed to several things, but they all revolve around this center point, the length of the rear driveshaft. You will hear various things from various people about what size lift can be ran without a SYE. The key here is to recognize the differences between their TJ and yours.

What are some of the harmful effects of not using a SYE?

Another, more obvious problem, are the U joint ears of the driveshaft making contact with the slip yoke as the driveshaft spins. This will make for a noticeable clanking noise and hard vibration. A transfer case drop will clear that problem up, as well as a high clearance extended slip yoke, but it will not correct the strain on the output shaft.

What are other positives does the use of a SYE provide?

Which SYE do you recommend?

If you’re like the majority of us however and have the NP231 transfer case as found in all the other TJ and LJ Wrangler models, there are various options in regards to SYE kits, but one of the most popular and well regarded is the Advanced Adapters SYE.

What if I have an LJ?
Lucky you! The LJ in most cases is fun up to about 4-4.5″ of lift without a SYE or double cardan (CV) driveshaft! That’s one of the benefits you get from the LJ with it’s longer wheel base… much less extreme driveline angles.

The last transfer-case you will need 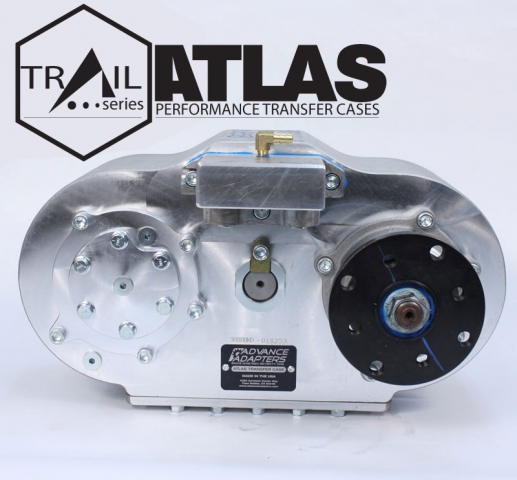 So far we have only talked about chain driven transfer cases and 2-speed transfer cases. So, of course we have to address the Atlas from the Advance Adapters. They are not only gear driven but also offer a 4-speed option for those who want ALL the gearing options that need. From their website:

Through the analysis of other successful transfer case designs, we have manufactured a rugged, all gear-driven transfer case. Combining the latest in CAD/CAM technology and years of in-house CNC machining capabilities, the Atlas transfer case is sure to bring you the utmost in dependability and performance. The Atlas is available for both left and right hand vehicle applications with centered rear differentials.

The solid, one-piece case design is manufactured from 356-T6 heat-treated aluminum alloy. This material is also used for the structural access cover and all other exterior components. The massive gears are helical cut and synchro-equipped for quiet performance and “shift-on-the-fly” capability. These gears are supported by needle bearing elements, precision matched to strong 8620 shafts. The ruggedly designed output shafts are amply supported by large taper bearing sets. The Atlas also features a unique twin stick design to deliver crisp, quiet operation.

Advance Adapters has built upon the proven design of the Atlas 2, to create the revolutionary Atlas 4sp. No other transfer case on the market today has 3 separate low range ratios built into a single unit. This transfer case was designed for the off road enthusiast that likes to tackle a large variety of terrain with one vehicle. Selecting one low range ratio that works well for mud, sand and rock crawling, is a compromise but the Atlas 4sp overcomes this limitation. One transfer case that is perfectly suited to any terrain that you may want to conquer.

The 4SP has essentially two parts. The first is the reduction housing. This housing holds a planetary assembly that has a gear ratio of 2.72:1 when in “low” range, and a 1:1 in “high” range. It has one shifter coming out of the top to select the desired range. The planetary is not a synchronized shift-on-the-fly design and must be operated when the vehicle is stopped. (The main case still retains the shift-on-the-fly capability just like the standard Atlas). The reduction housing shifter is designed for a cable shifter.

The second part of the 4SP may look the same as the standard Atlas, but it does have some differences. The main case of the 4SP is the same raw casting, but has some machining variations to make it into a 4SP. The main case functions independently from the front reduction housing and retains all of the normal Atlas features (front and rear outputs controlled independently, and the “front only” option). All of the gears are the same. The front output uses all of the same parts along with the cluster. The strength of this unit is not an issue. We use a planetary assembly that was originally run in a NP241-HD transfer case. The six planetary gear setup has proven its durability and has been used in countless heavy-duty vehicles. Other attributes to the planetary assembly include a very quiet operation, easy shifting, and low rolling resistance. When all of this is put in front of a legendary Atlas Transfer Case, you get the best combination of gear ratios and reliability.

In researching for additional information, I came across this image…so, as a final thought, if this is a use you need for your transfer case…well, the atlas is probably not a good solution for you…just saying. The pictures was from US Border and Customs agents who discovered the illegal drugs coming into the US.

Thanks to the following folks for contributing to the information in this article: